A sense of timing was always one of Ole Gunnar Solskjær's greatest attributes in a Manchester United shirt – from his canny ability to make an impact with limited minutes at the end of a game, to his appreciation of where to make his runs into the penalty area and, more importantly, when.

Although not wholly by his design, that skill appears to have transferred into his brief life as United’s caretaker manager as he prepares to begin his time in the dugout for the Red Devils against Cardiff City on Saturday.

For while José Mourinho was dismissed off the back of a 3-1 defeat at Liverpool, which left a 19-point chasm between the two north-west rivals, it was the Portuguese's first league loss since the 3-1 derby reverse at the hands of City on November 11.

Those two fixtures, and the fact United were stretching the definition of the term “second best” over the course of each game, helped define Mourinho’s reign in the eyes of executive vice-chairman Ed Woodward. The club under Portuguese weren’t just falling behind their rivals, they were plummeting into the abyss.

Having to face three of the top five sides in the country, having also played Arsenal on December 5, in the last six league matches helped accelerate Mourinho’s inevitable demise. But for Solskjær, the Norwegian’s first five games represent as comfortable a re-introduction into Premier League management as is possible. 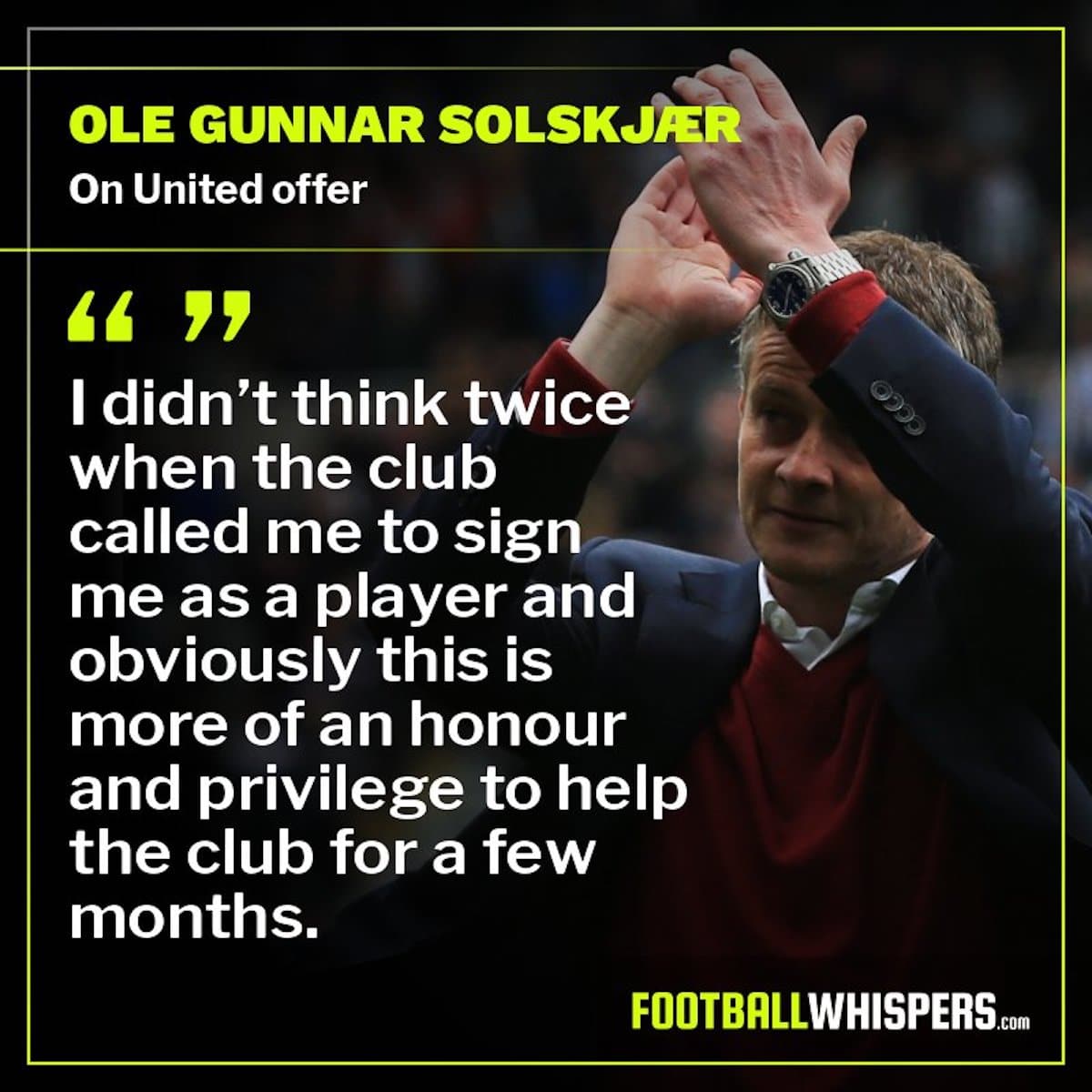 The fact his first game is against the only other club he's managed in England – an awful 30-game stint in charge of Cardiff which ended in the club's relegation –makes for a nice extra narrative but, ultimately, against the Premier League’s 16th-ranked team it represents a real chance to secure three points.

And the same applies to the rest of the festive schedule.

Huddersfield Town, in the relegation zone, come to Old Trafford on Boxing Day. Bournemouth, bottom in the form table at the time of writing, arrive four days later. A trip to Newcastle United comes on January 2, before an FA Cup third round tie to Championship side Reading.

United have been defensively suspect all season but in Cardiff (15th), Huddersfield (20th) and Newcastle (16th) they face three of the Premier League’s worst attacks, in terms of expected goals (xG). And while Bournemouth may rank seventh, the Cherries are on a three-game goalless run.

How Mourinho must begrudgingly look at that schedule and think it could have extended his stay at The Lowry hotel well into the New Year.

Conceivably, by the time Solskjær takes his United side to Tottenham Hotspur on January 13, he could have a perfect five from five record with Paul Pogba successfully reintegrated into midfield and confidence restored among so many underperforming players in red.

Maybe this scenario, as much as the embarrassment of conceding 36 shots at Liverpool, convinced Woodward the time was right for change.

Mourinho may have secured the necessary results over Christmas, but the toxic nature of his management would have continued to fester.

In appointing Solskjær now, Woodward has given the former striker the best possible platform to lift the gloom, not just for supporters but for players and staff alike.

And, from a personal point of view, with no obvious full-time successor to Mourinho apparent – assuming Tottenham cling onto Mauricio Pochettino for dear life – for Solskjær it will also provide a significant tick on his own job application.

Of course, the flipside to that argument is that should United not impress or record the requisite results for those run of games, that delivers a worrying message as to where the team are and if the man in temporary charge is up to the task long-term.

Let’s be frank, were it not for Solskjær's emotive ties to United and status as a bona fide fans’ favourite, he would be nowhere near this job.

His supporters point to his work at Arsenal job last summer? Of course not, nor should he have been.

Likewise, if any other Premier League vacancy became available, would Solskjær even be among the top five candidates? Probably not.

Solskjær's time at Cardiff was a disaster, punctuated by defensive naivety, poor signings and indecision and inconsistency in selection. In his defence, it was four years ago and he will be a more mature and wiser manager as a result of it, but this is still Manchester United – the richest and one of the two biggest clubs in world football.

His elevation to the Old Trafford dugout smacks of a reactionary decision made upstairs to win back goodwill among the fanbase by sprinkling some sentimentality long lost under Mourinho.

He hasn’t been part of Manchester United for 11 years, leaving 12 months after one of his coaches Michael Carrick had arrived at the club. It’s unclear how well the two men know each other.

Mike Phelan has also been drafted in as another United old boy and was well-liked as Sir Alex Ferguson’s assistant. But the dressing room he steps into is a vastly different one to what he left five years ago.

Ferguson commanded the utmost respect among his players and the idea of players carrying undue influence was a problem for other clubs. David Moyes, Louis van Gaal and Mourinho all failed to continue that tradition and now the United squad is one of fractured egos and wicked whispers.

There are no guarantees for Solskjær and while he will undoubtedly lift the atmosphere at the club and make it a more pleasant environment to work in, he couldn’t be starting from a lower position in terms of squad morale. But results will be the true test of his work and although it’s not really been put to him, he has a lot to prove.

United need to close an 11-point gap on fourth place, be competitive against Paris Saint-Germain in the Champions League last-16 and hopefully enjoy a run in the FA Cup. So low is the bar, the idea of a trophy is far too ambitious at this stage.

But for all the comfort Solskjær enters the job, he doesn’t have a great deal of time to get his feet under the door. Five nice games to start with, yes, but all in the space of 14 days.

Then again, the ability to make an impression in a limited period characterised Solskjær's time as a player at Old Trafford.