When Ander Herrera signalled to the bench that he could no longer continue, injured 20 minutes into Manchester United‘s 0-0 draw with Liverpool at Old Trafford, the fourth most expensive signing the Red Devils have ever made didn't even twitch. He knew he wouldn't be called upon.

As a central midfielder capable of playing either as a No.8 or in a defensive-midfield role, Fred, a £47million summer signing from Shakhtar Donetsk, should have been a prime contender to replace Herrera. Instead, Andreas Pereira, a technically gifted 23-year-old whose progress has stalled, got the nod.

Moreover, with Nemanja Matić unavailable for this, the biggest domestic fixture of United's season, Fred should have been manager Ole Gunnar Solskjær's first choice to assume a starting berth.

Yet Scott McTominay, a disciplined homegrown product with obvious limitations, started at the base of midfield; Fred spent the full 90 minutes as a spectator.

While it is understandable that Fred, coming from a league and culture, first in Brazil and then Ukraine, vastly different to England's Premier League, should take some time to settle in his new surroundings, it is becoming increasingly bizarre just how little is seen of the 25-year-old.

The 11-cap Brazil international impressed with Shakhtar in last season's Champions League and was wanted by Manchester City. It was seen as somewhat of a coup that United managed to land the midfielder ahead of their cross-city rivals. 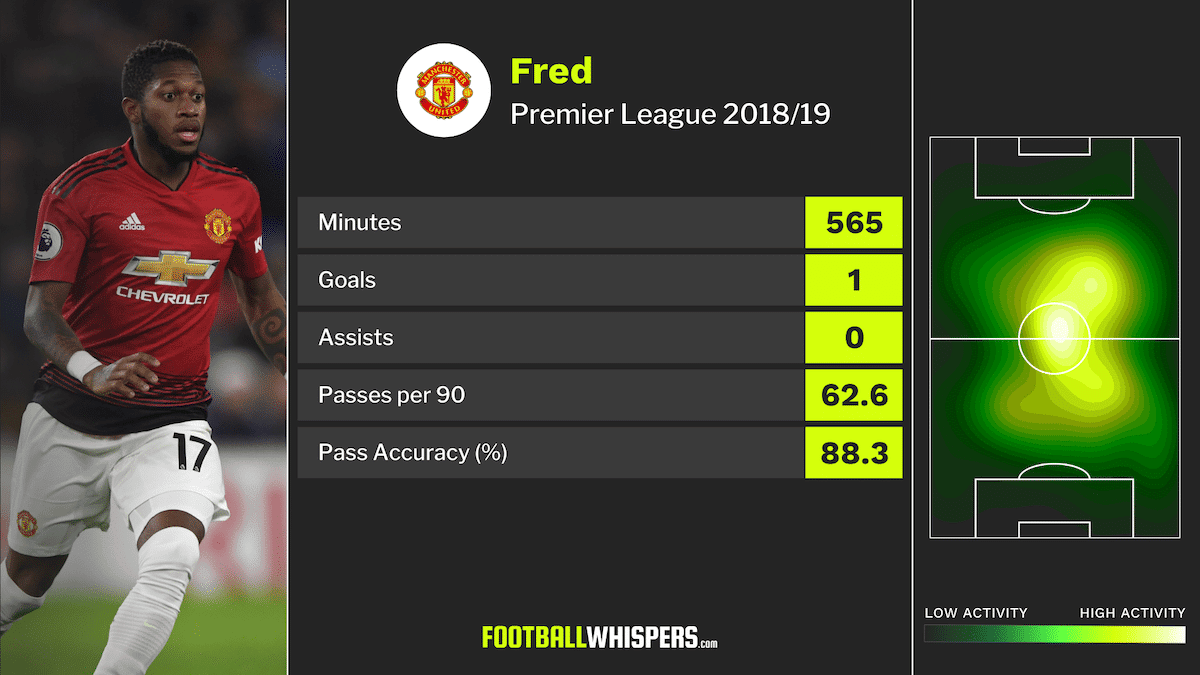 Fred would be the man, it was posited, to finally free Paul Pogba, the ideal complimentary piece to the World Cup-winning Frenchman.

Those who saw Fred in action for Shakhtar, whether domestically or in the Champions League, will have noted a player of technique and tenacity, a skilled dribbler with a burst of pace through the middle third, tactically disciplined yet creative when called upon.

The fee was inflated, a result of Premier League wealth, a distorted market and a selling club wisely playing prospective buyers off one another. But even so, United were getting an experienced international approaching his peak years, a member of a Brazilian World Cup squad which had no room for the likes of Fabinho, Alex Sandro and Malcom.

Two-thirds of the way into his first campaign with United, Fred can't even displace McTominay and Pereira, neither of whom have set the world alight at first-team level, in the midfield pecking order.

And the strange thing is, it's not as though Fred has been that bad when he has played. His meagre 566 minutes of Premier League game time this season consists of just seven starts, with three further appearances off the bench, meaning he has been involved in less than half of United's league game's this term.

He has just one goal – scored in September's 1-1 draw with Wolverhampton Wanderers at Old Trafford – and no assists to show for his efforts, but he wasn't brought in to be a scorer, nor especially a creator; he was, or so it seemed, signed to offer balance, dynamism and thrust if fielded as a No.8, or discipline and bite if starting as the deepest midfielder.

No trees have been pulled up, that is for sure, and he has at times been careless in possession, killing the odd promising attack through imprecision, or delaying half a beat when a quick release was required. But his 88.1 per cent pass accuracy suggests he has not been especially sloppy, and both Pogba and Alexis Sánchez are, on average, dispossessed more times per 90 minutes than the Brazilian.

Yet it's not only Solskjær who has been reluctant to rely on Fred; Mourinho, the man who signed him, also used the 25-year-old sparingly before his dismissal in December.

Fred has started just two games in Solskjær's two months in charge, an FA Cup third-round tie with Championship strugglers Reading and at home to relegation certainties Huddersfield Town in late December. His last Premier League start under Mourinho came way back on November 3, away to Bournemouth, and even then he lasted only 56 minutes before being substituted.

Fred has completed a full 90 minutes for United just three times, and only once since August. He started United's first three fixtures, which included defeats to Brighton & Hove Albion and Tottenham Hotspur. Fred certainly didn't look like a £47million player in those games, but few in United red escaped those losses with any credit.

Those early missteps could have been attributed to growing pains, an adjustment period many players experience when joining a new team in a new league. The fact that Fred's involvement since has grown more sparse, though, goes against the usual pattern of gradually integrating an adapting player.

So why can't Fred get a kick? Is it something Solskjær and Mourinho before him are seeing in training? Have United already given up on one of their costliest ever signings?

“McTominay was the obvious choice against Liverpool because he’s an academy kid,” Solskjær said when asked why Fred wasn't used against the Merseysiders. “We had five academy kids on the pitch at one point. He knows what it means.”

It was an explanation not without some logic – a player reared by the club might well understand the significance and history of such a heated fixture more than a recent import – but it's pretty loose reasoning for selecting a player who is, or at least should be, inferior.

Solskjær also insisted Fred might be called upon for the midweek fixture against Crystal Palace, a game for which United could be without as many as ten players due to injury. That such squad depletion is required before Fred is considered for selection inspires little hope for the Brazilian's Old Trafford future.

Eight months on from his signing, it feels as though less is known about Fred now than ever. The less he is seen, the more questions are raised; questions no one seems able to answer.