The tactical changes Ole Gunnar Solskjær has implemented at Old Trafford in his short time in charge thus far have been minor in terms of scope – more a case of a few choice tweaks, rather than wholesale revolution.

Indeed, Manchester United's post-José Mourinho resurgence appears as much down to the dark mood the former manager cast over the club being lifted as anything outlined on a tactics board. There is a sense of liberation within the squad, out from under a rule which had grown toxic and oppressive.

But still, some of the simple on-field adjustments Solskjær has made have had a profound effect, none more so than how the seconded Molde coach has dragged United's playing style into the present by instigating a sustained high press.

United would occasionally press high under Mourinho – most notably in home fixtures against Tottenham Hotspur and Arsenal this season. But rarely did they sustain out-of-possession pressure in the attacking third for periods longer than 15 minutes out of 90. More often than not, the former Chelsea and Real Madrid boss was content for his side to fall back into a deep defensive block when the ball was lost.

After all, exhaustively drilled shape and staunch defending of the penalty area are key tenets of Mourinho's successful tactical blueprint. A failure to fully embrace the high press, however, is one of the main reasons many now believe the Portuguese's methods have fallen behind the times. 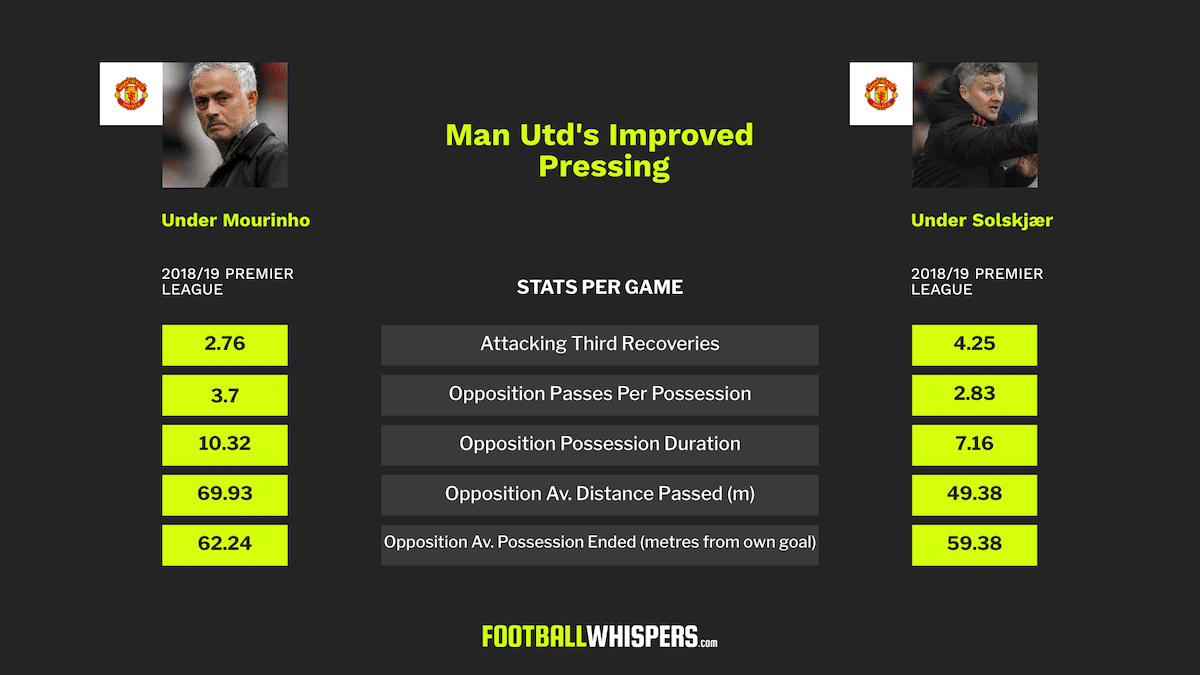 Not so with Solskjær. One of the most instantly identifiable on-field differences between United pre and post-Mourinho has been their energy and enthusiasm. It was pointed out that in the 5-1 defeat of Cardiff City in late December, Solskjær's first game in charge, United “outran” – that is to say they collectively covered more ground – an opponent for the first time this season.

This was used in some quarters as evidence of how the players had “downed tools” under Mourinho and were now simply trying harder under their new boss. Drawing such conclusions from distance-covered statistics is a gross oversimplification, though.

United's increased running is a result of the tweaks Solskjær has made. Firstly, the full-backs are encouraged to push higher than previously, thus giving them more ground to cover. And they now press the opposition high up the pitch in an effort to regain the ball in dangerous areas.

“We’ve had the right mentality, killing teams,” Jesse Lingard told The Guardian when asked about why United's results have improved so rapidly under the caretaker manager.

“That mentality is very important. Ole has told us to start quickly, press teams and make sure we're on the front foot and make sure that the first 15-20 minutes can decide the game.”

Paul Pogba echoed Lingard's sentiment in an interview with Sky Sports: “We are more offensive I would say, so we create more chances, and play a bit higher as well. So we try to play like that. That is how we want to play.”

With and without the ball, United are aiming to play their football higher up the pitch. The organised pressing Solskjær has implemented, and the alacrity with which his charges have taken to this task, means that opposition attacks are now often thwarted before they begin, and United are seeing more of the ball as a result.

Of course, with Solskjær only having overseen four Premier League games, the sample size is small, and the quality of opposition means it has been easier for United to assimilate these new instructions; a sterner test comes on Sunday, when the Red Devils face Tottenham, themselves press masters.

As such, the statistical differences before and after Mourinho are good only for a cursory guide to the work being done under Solskjær and its sustainability. The numbers are, nonetheless, striking.

On the whole, United recover the ball less frequently now – 53.25 times per game, opposed to 60.41 under Mourinho this season – but this is because their share and quality of possession has increased, with 660.5 passes per game compared to 496.17, and their number passes per possession up to 5.47 from 4.16.

What is most telling is where United are now recovering the ball, with 4.25 recoveries per game in the attacking third under Solskjær, compared to just 2.76 under Mourinho.

The pressure United are putting the opposition under is also contributing to opponents being less effective when they have the ball. United's opponents now retain the ball for just 7.16 seconds per possession, opposed to 10.32 seconds under Mourinho, and making just 2.83 passes per possession, down from 3.7.

Under the Portuguese this season, United allowed their opponents to pass for 63.93 metres per possession; Solskjær's side have cut that figure to jut 49.38 metres.

This new way of playing will be tested much more rigorously before the end of the season, and United's rapid rate of scoring under Solskjær will regress towards the mean as the general level of opposition rises.

Better teams will limit United's time on the ball and ability to create chances. But Solskjær can continue to control what his side do when out of possession.

In having them defend from the front, Solskjær has brought United's tactics into the present as they plan their post-Mourinho future.