José Mourinho believes he tried with Paul Pogba. Tried everything in his power get the best out of his most expensive ever signing. Tried him deep, tried him advanced; tried him on the left of a three, where everyone says he should play. Tried giving him responsibility, tried tough love.

But what Mourinho never came close to doing in his two and a half years alongside the enigmatic midfielder at Old Trafford was understanding him.

To that end, Ole Gunnar Solskjær, in temporary charge of Manchester United until the end of the season, has succeeded. And that's why, finally, in his third season back in England, we are now seeing the real Pogba, the £89million man with unique, mercurial gifts.

Solskjær appears to understand Pogba, that is, as both a personality and a player. He appreciates the former Juventus man's flamboyance and doesn't try to stifle it; he is cognisant of how the World Cup winner's creative best is only exposed when surrounded by a mood and environment that is conducive to it, that encourages it.

But most of all Solskjær seems to have nailed Pogba's ideal role, replicating the conditions which saw him become a key player in four Scudetti and a Champions League final with Juve.

While Mourinho made few concessions for Pogba the brand, he will feel – not without some justification – that he gave the midfielder what he needed on the pitch. After initial experiments with the playmaker as part of a double pivot in a 4-2-3-1 formation, the former Real Madrid and Chelsea boss repositioned his star man on the left of a midfield trio, where he had shone for Juventus.

This, though, goes only halfway towards a true effort to maximise the potential of the club's prized asset: that may well be Pogba's best position but Mourinho was not able to sculpt the optimum role for the Frenchman.

The midfield mix of that great Juventus side Pogba was a part of is, admittedly, one difficult to recreate, such was the talent at the disposal of Antonio Conte and then Massimiliano Allegri. But, in terms of duties, Andrea Pirlo sat deep and conducted, the combative Arturo Vidal provided thrust and energy and was technically reliable, and Pogba would flit in and out of games, sparkling magic dust in and around the final third, offering a degree of creativity his colleagues could not match; he was the Bianconeri‘s X-factor.

For most of his time back at United, Pogba has effectively tried to recreate the Juventus midfield recipe single-handedly, dropping deep to collect the ball, driving forward through the middle third and then aiming to unlock the opposition.

Not any more, though. As the above Football Whispers Player Persona illustrates, since Solskjær has taken charge, Pogba has involved himself less in United's build-up play, with Nemanja Matić and Ander Herrera instead sharing the duty of progressing the ball through midfield.

One of the most common criticisms levelled at Pogba since his world-record move is that he doesn't “control games”. But that was never his forte, never part of his remit at Juventus, the role in which, presumably, his performances convinced United to part with their biggest ever transfer fee. 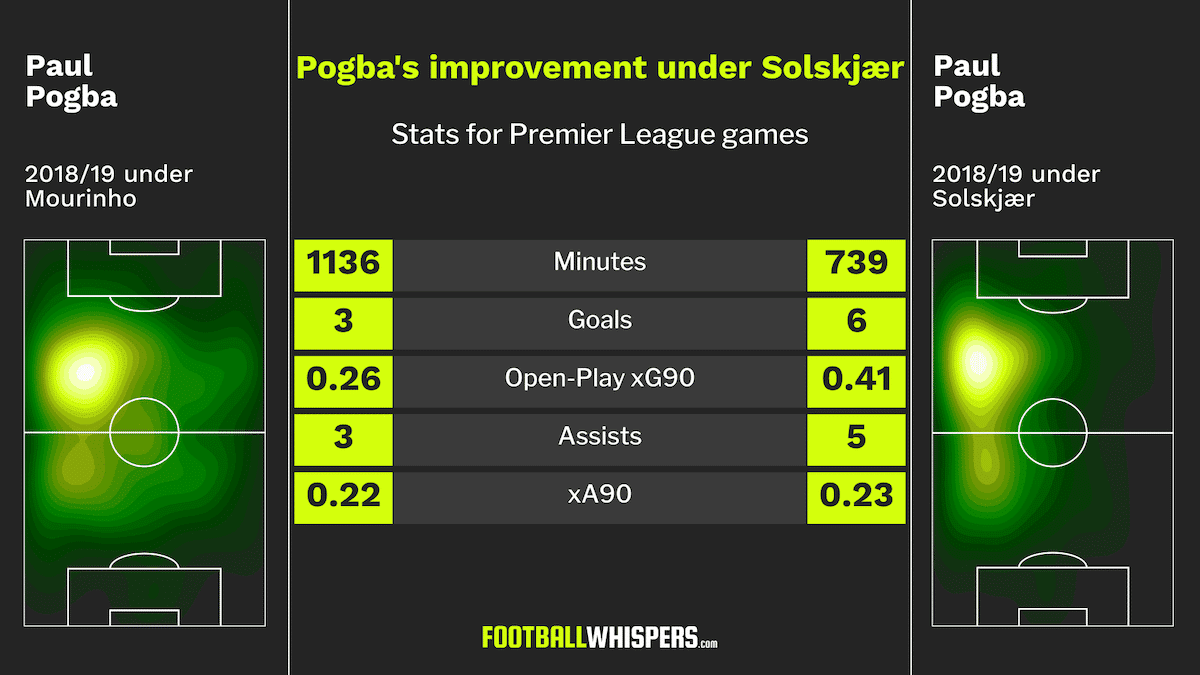 While under Solskjær Pogba is making more passes and chipping in with more defensive work than when Mourinho was in charge, this more reflects United's increase in average possession and implementation of a co-ordinated press since the Norwegian was installed.

Instead of being asked to be a midfield Jack of all trades, Pogba's primary tasks have been pared down, allowing him to focus his influence to where, though no longer ubiquitous, he is now regularly decisive.

The heat maps above show how Pogba is roaming from his station of the left of midfield less, trusting his colleagues to undertake their duties in delivering him and his attacking cohorts the ball high up the pitch.

As a result, he is becoming masterful at timing runs into the penalty area to threaten goal, with his increased scoring rate aided by an average of 4.25 touches in the opposition's box per 90 minutes, up from just 3.4 for this season before Solskjær arrived.

Pogba is also dribbling less frequently (2.62 attempted take-ons per 90, down from 3.48) as the over-elaboration in his game, for which he was regularly pilloried, is being stripped away. The Hollywood balls are diminishing, too, with 6.38 long balls per 90, down from 8.95, as he feels less of a need to carry the mantle of turning defence into attack at every opportunity.

It is a simpler game Pogba is playing now, but it is much, much more effective. And it all comes down to having a manager who “gets” him, on and off the pitch.