The noise around Old Trafford during Manchester United’s 4-1 defeat of Bournemouth was as good an indication as any of the feel-good factor sweeping over the club.

Cries of “attack, attack, attack” which were chanted in desperate hope under the tutelage of José Mourinho now come with an air of expectation with Ole Gunnar Solskjær at the helm.

Arriving at his former club with plenty of credit in the bank – Solskjær’s instinctive winner to seal the Champions League and last leg of United’s 1999 treble ensures immortality at Old Trafford regardless of this managerial stint – but the 45-year-old has certainly hit the ground running.

Three wins from three and 12 goals scored, albeit against Cardiff City, Huddersfield Town and Bournemouth, have United eying the top four once more.

It is, perhaps, of greater significance that United are playing in a manner which holds true to the philosophy of attacking football on which the club’s foundations are built – a luxury never truly enjoyed since Sir Alex Ferguson vacated the managerial role in 2013.

Whether or not Solskjær can maintain his flying start remains to be seen, but his approach is clearly having an impact on United’s squad after the toxicity which defined the latter stages of Mourinho’s tenure.

The Portuguese was never likely to bend to the will of supporters after a career in which restriction has reaped such a hefty reward. Freeing the shackles was, therefore, a must for whoever took over and has seen an instant upturn.

United are now averaging nine shots on target per 90 minutes in the Premier League, an improvement on the six managed under Mourinho, and the Red Devils’ four goals per 90 is a considerable jump from 1.7.

But what has changed to allow United to post such impressive numbers in the fledgling Solskjær reign?

The Norwegian’s statement that “Manchester United should never be outworked” by an opponent struck a chord after some players had been accused of downing tools. It is clear that the ‘Baby Faced Assassin’ will not abide slackers and he has his side working harder and higher up the pitch.

A high press, which is made possible by the pace of Marcus Rashford, Anthony Martial and Jesse Lingard, has been one of the key departures from Mourinho’s United model.

The club are now winning the ball in the attacking third 5.33 times per 90 minutes – the third most often in the Premier League – and are able to hurt teams closer to their own goal. Under Mourinho, the figure stood at 2.76 recoveries and United were struggling in 19th across the top flight.

With the high press now a staple of top teams across Europe, it is clear Solskjær is out to emulate the model which has proven so successful elsewhere. Winning the ball quicker is also helping United control games, and they average 67.96 per cent possession under Solskjær compared to 53.48 under Mourinho.

It should, then, come as little surprise that United are scoring more readily and their attacking players are enjoying themselves. Most notably of all, the re-emergence of Paul Pogba has been as startling as it's been welcome.

Playing on the left side of a midfield three and with the freedom to move between the lines and into advanced pockets of space, Pogba has been back to his imposing, exuberant best over a hugely productive Christmas period.

The World Cup winner has plundered four goals and laid on a further three in his last three outings. The three big chances he has created is the best among United’s ranks and he also passes more than any other player with Solskjær in charge.

The Frenchman has won possession (28 times) more than anyone else, which could come as a surprise to many given his aptitude for hard graft has been questioned on more than one occasion. The smile, and heavily choreographed celebrations are back, keeping them there will go a long way to United’s form staying the course this season.

Both were rarely seen before Mourinho’s departure and Pogba deserved criticism for some of his showings earlier in the campaign. However, the 25-year-old was hardly aided by the way in which he was deployed, with defensive discipline cherished ahead of attacking freedom. His numbers suffered as a result.

He managed just three goals and three assists in 14 league games under Mourinho this term and created only two big chances for his side. His passing accuracy was also down on a current completion rate of 86.4 per cent and all in all Pogba was a shadow of the man we have seen in recent weeks. 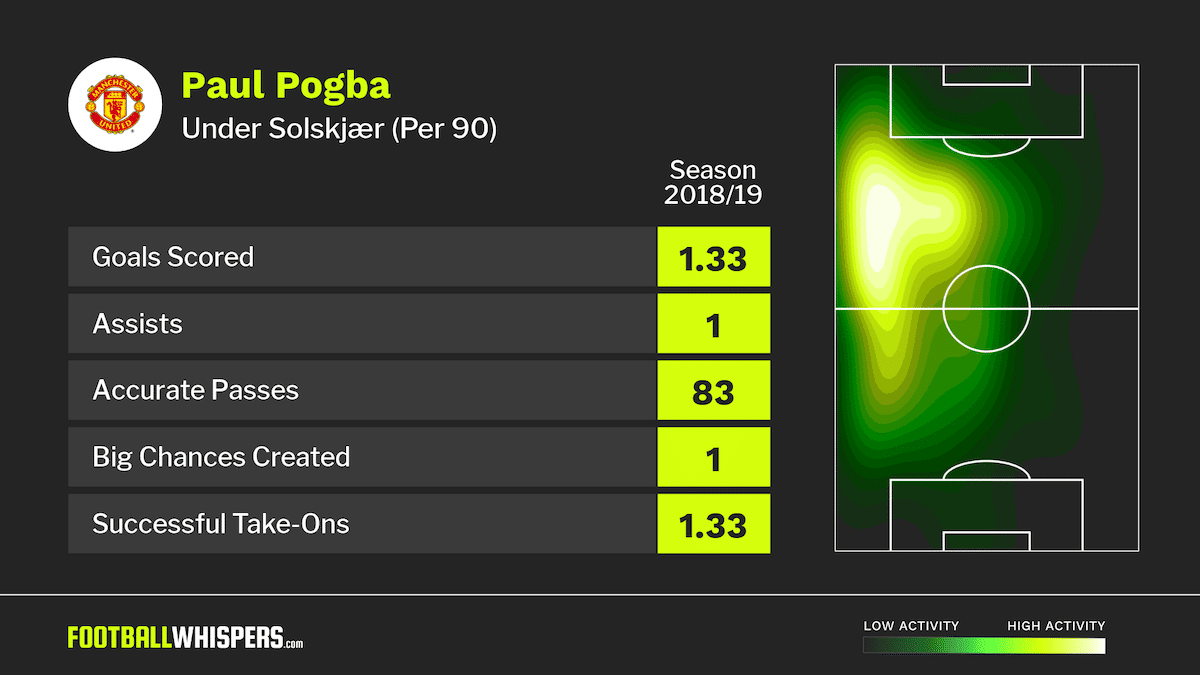 Of course, as previously stated, Pogba and United have had relatively obliging prey to feast on over Christmas and will expect to get the better of Newcastle United on Wednesday evening.

Beyond the game at St James’ Park lies an FA Cup game with Reading followed by a subplot-laden encounter with Tottenham Hotspur a week on Sunday. That match will see Solskjær come up against Mauricio Pochettino, the man touted as the frontrunner to be Mourinho’s long-term successor.

In many ways it will be the first true test of Solskjær’s credentials at this level and Spurs’ similar commitment to playing on the front foot should make for an entertaining game.

The question facing United's interim boss is whether to stick with attack, attack, attack or twist and adopt a more measured approach under the Wembley arch.

You sense a man steeped in the Manchester United way will retain at least some of his desire to entertain on the grander stage and let his attacking players do the talking. And why not? It’s worked so far.