Fortunately for Manchester United fans, Ole-Gunnar Solskjær’s recent reign at Molde was better organised than his announcement as interim boss at Old Trafford.

Subtle captions on the club website and the Norwegian Prime Minister broke the news before United themselves. The gods of farce are never satisfied.

The Old Trafford faithful will be hoping that the farce goes elsewhere from now on, though, and there are indications that Solskjær could be more than just a ‘fan favourite' appointment.

Solskjær’s time in his two stints at Molde have been quite successful. Managing between 2011 and his departure for Cardiff in 2014, the club won their first two Eliteserien titles, as well as a Norwegian Cup.

In his 2014 absence, they won a league and cup double, but the team struggled in the 2015 season (Norway runs on a calendar year season). Solskjær returned in October for the final month of the campaign, where they limped to sixth.

Fifth in 2016 was followed by consecutive campaigns as runners-up to Rosenborg. Molde were having a good run in the Europa League qualifying rounds until they met Zenit St. Petersburg in the play-offs, narrowly losing 4-3 across the two legs.

There is, though, the Cardiff question.

Solskjær’s time in Wales was undeniably not good, to a level where it’s now being called ‘disastrous’. He cost Cardiff around 0.24 points per game compared to his immediate predecessor and successor.

A troubled spell at Cardiff

Points per game before and after Solskjær's reign

Across a full Premier League season, this would be around nine points, or three wins. There’s no guarantee that this rate of -0.24 points per game difference will continue at United (it certainly didn’t at Molde), but it remains a blotch on his record.

The style of Solskjær

In terms of an interim manager, Solskjær’s lack of rigid philosophy is a good thing. At Molde, his formations have been flexible, moving between four and three-men midfields across the years.

Molde were not particularly heavily possession-based, either. In the 2018 season, they had the fourth-highest average share of possession, and in 2017 they were tenth (in an 16-team league). But what matters are points. And goals.

When he joined Cardiff, he said: “My brand of football will hopefully make [the fans] proud of the way we play football. My brand is forward minded. Forward passing, forward running. I want to attack. I want the players to express themselves.”

This is maybe why he struggled with the Bluebirds. However, it's certainly a statement that fits Manchester United – with their embarrassment of attacking riches – than a team fighting relegation.

In 2018, Molde had the most goals from open-play and the most shots on target out of any side in the Eliteserien. When they won the ball, they broke with pace using wingers. Whisper it quietly but this sounds like ‘The United Way’.

Take this example, from a match against Rosenborg in September.

Molde (blue) have just won possession in their own corner and have played the ball out to the striker, who has dropped deep with his back to goal.

The Norwegian side are limited a little by the ability of their players, but several players rush forwards in support. 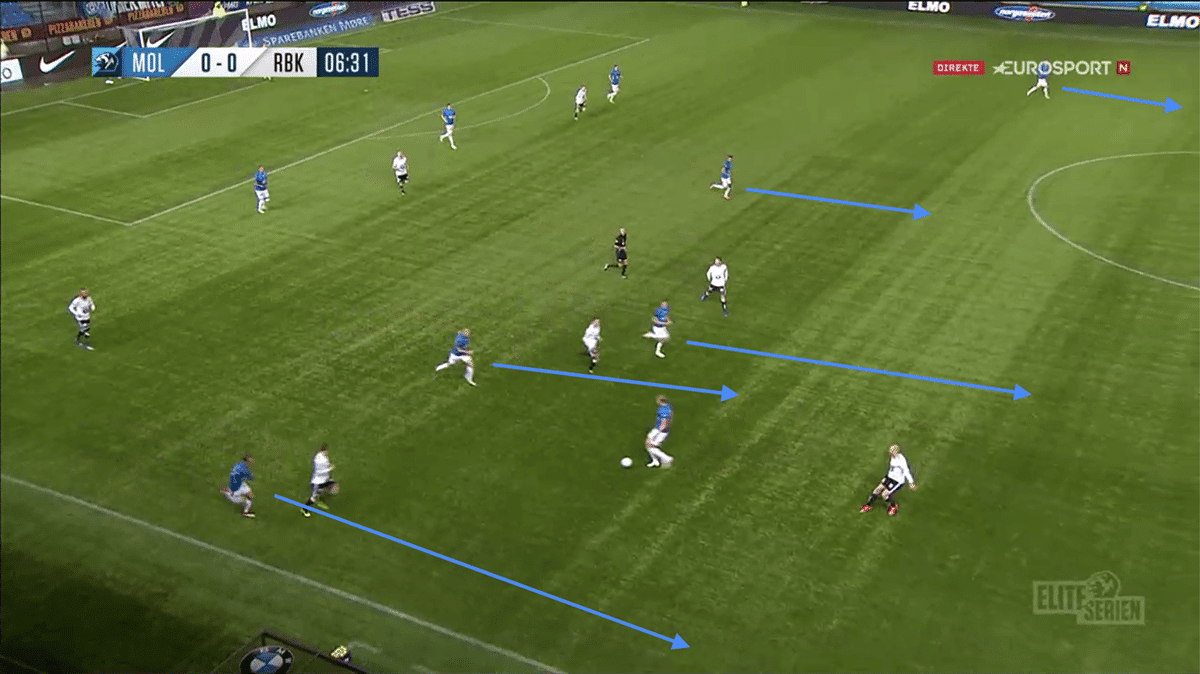 They’re not afraid to be direct either. Here, Molde have just regained the ball at the back against eventual third-place Haugesund, and are in the middle of a pressing trap. 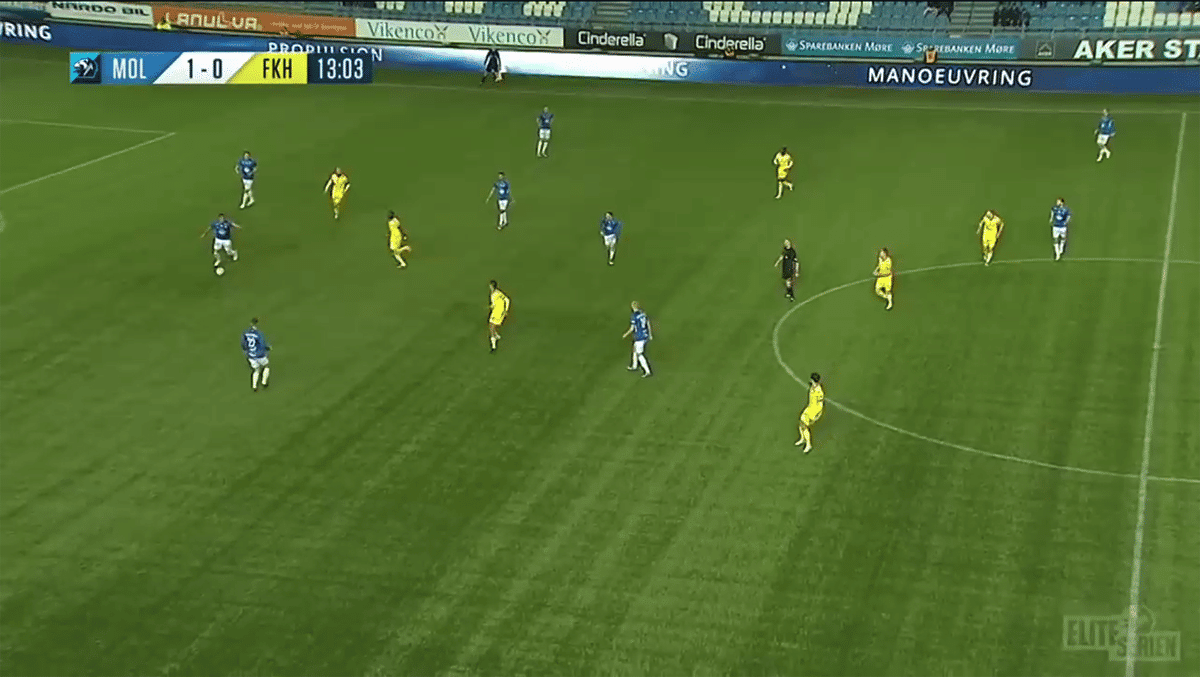 The central defender on the ball plays a pass to the full-back. But instead of playing it to feet, he intelligently puts a lot of pace onto the pass to play it into space on the wing.

With time to breath before being pressed, the full-back looks up towards where he knows his forwards will be. 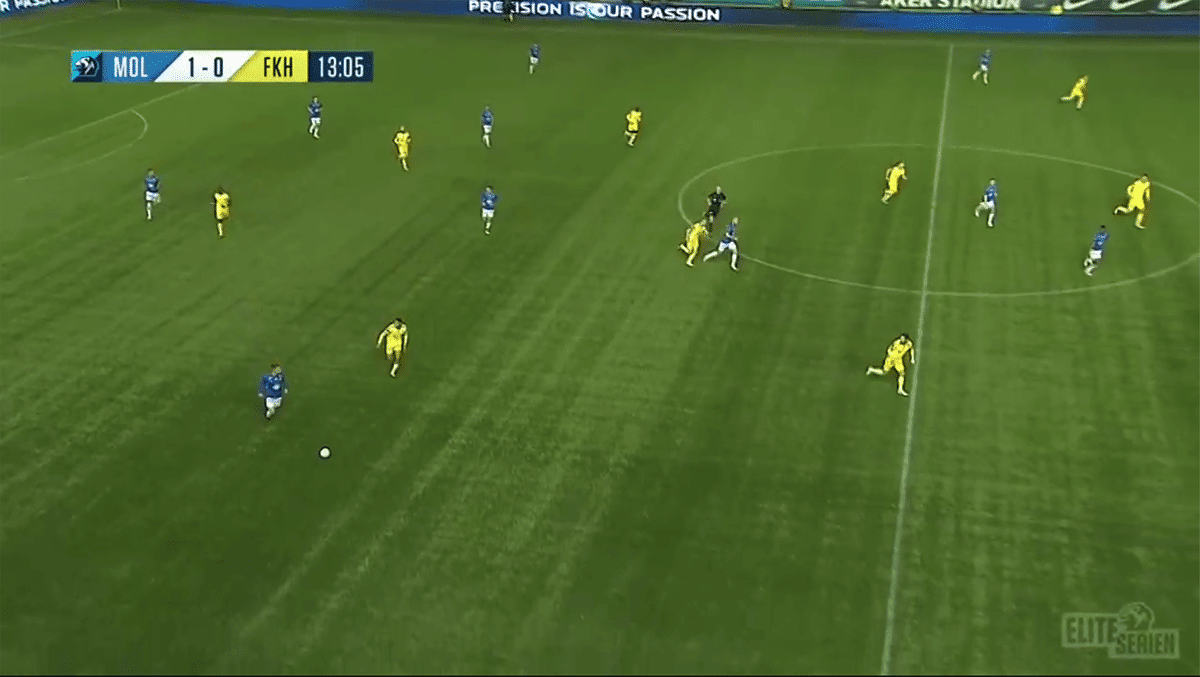 He plays the ball into the centre of the pitch and, because there are two attacking players in such close proximity, the pass is completed.

So Molde went from being pressed in the defensive third to getting the ball into the attacking third in seconds. 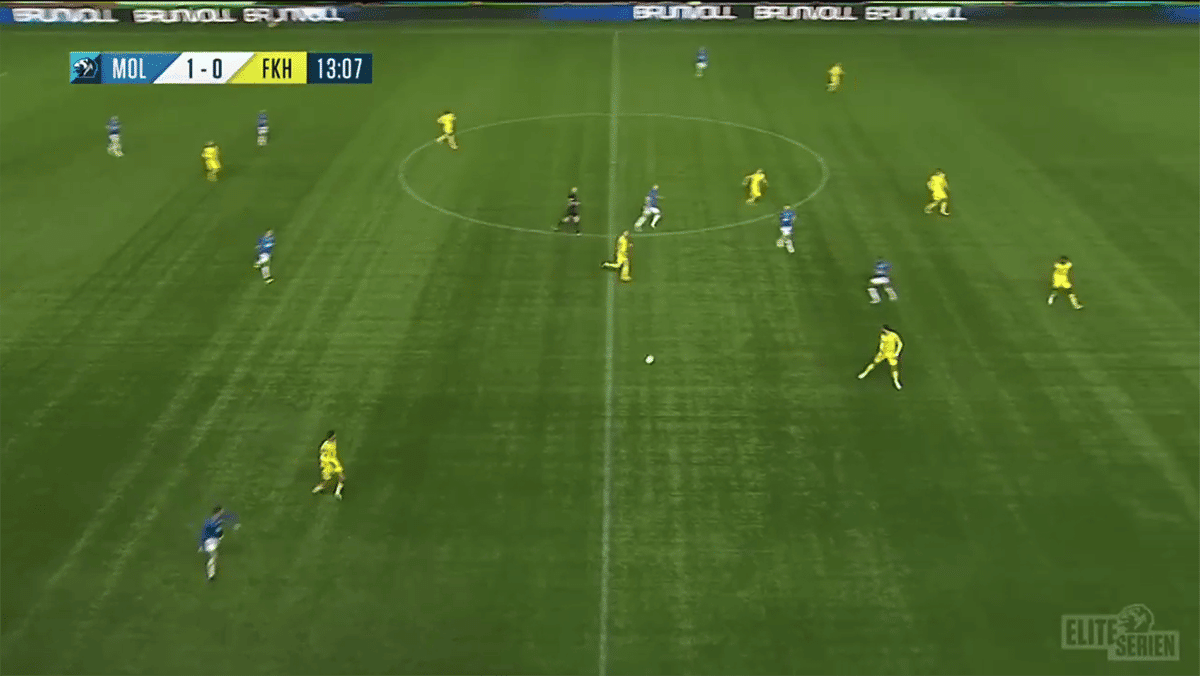 If all that wasn’t enough, Solskjær’s 2018 Molde pressed high up the pitch themselves.

They had 10.5 per cent of their possession regains coming in the final third this past season. Manchester City’s rate, since the start of their Centurion season in 2017/18, has been 10.1 per cent.

And, finally, the man himself. “He has a positive approach to man management and always looks to build his players' confidence,” Norwegian journalist Lars Sivertsen has written.

A positive motivator whose most-recent team has played pacy, attacking football — could there be more of an antidote to José Mourinho in football?