Anthony Martial and Manchester United have had a complicated relationship over the past three-and-a-half years.

There have been moments of pure happiness; think his debut goal against Liverpool. Moments of complete dissatisfaction; such as being criticised by José Mourinho for attending the birth of his child in the summer. And periods of indifference that suggested a future break-up was likely.

However, United and the French attacker have come through these difficult spells and, according to ESPN, the 23-year-old is close to signing a new five-year contract at Old Trafford.

It's an indication of the forward's belief that he and United are in fact right for each other. That at the club he can grow and develop. Yet there is one major issue that remains, and one that will need solving in the coming years: just where is Martial's best position?

“Foremost I am a striker,” he said in an interview with Sky Sports in 2016. Yet José Mourinho didn't agree and preferred to use the France international out wide.

That hasn't changed drastically under Ole Gunnar Solskjær; as the heat map below shows, Martial continues to operate off the left. However, he has been given greater freedom in attack and less defensive responsibility. 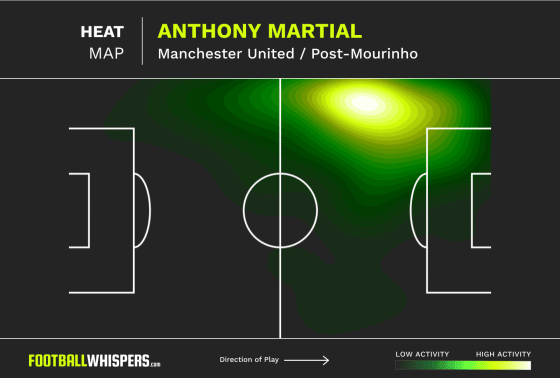 “It's been great for me to work with a manager who also was an attacker when he played,” Martial told TV2.

“He gives me good advice, especially when it comes to positioning in front of goal and finishing technique.

“It's helped me a lot. The best advice I've received from him is that I need to play to my strengths. He also told me not to put too much pressure on myself, and try to express myself on the pitch.”

Martial may be taking on advice from Solskjær about finishing, yet he's not needing to use it.

That's because the United star has gone from goalscorer to creator since Mourinho's departure from Old Trafford – although the small sample size of five Premier League matches, against mainly weaker opposition, should be taken into account.

His scoring attempts (1.62), touches in the opposition box (5.56) and expected goals (0.21) per 90 are all down on what he was registering under the Portuguese.

And his Football Whispers‘ persona radar highlights his increased chance creation over the past month.

“Anthony can play as a No.9 because he’s got strength and he’s good an holding the ball up,” Solskjær said at the end of December. “But he is fantastic at one-one-ones, so he can also play on the left or right wing.

“We need to get Anthony facing forwards. I realised when I was a striker that when I ended up wide on the left or right, it can be so much easier to get space and face defenders up. I think Anthony enjoys playing wide, taking men on.”

It appears the die has been cast, at least in Solskjær's mind. Martial the striker is no more; Martial the winger is his future. One which he can embrace fully now he is once again in a happy and healthy relationship with Manchester United.