Ahead of Monday’s FA Cup battle with Crystal Palace, Chris Hughton made ten changes to the Brighton side which drew 2-2 with Bournemouth at the weekend.

Solly March was one of the players who made their return and the midfielder was excellent as the Seagulls picked up a 2-1 win over their bitter rivals.

Setting up in a 4-4-2 formation, Hughton utilised the 23-year-old on the right of the four-man midfield and despite being very left-footed, he was key to Monday’s victory.

Only centre-back Connor Goldson touched the ball more than the 74 times March had possession. He finished the game with three shots, four key passes and completed 74 per cent of his 50 passes and attempted a team high 11 crosses.

Beram Kayal and Dale Stephens patrolled the middle of the pitch, but it was March’s movement and ability to come inside which proved crucial. Drifting into the half-space to create gaps for Ezequiel Schelotto to bomb forward from right-back, he helped the 4-4-2 gain width when they needed it most. 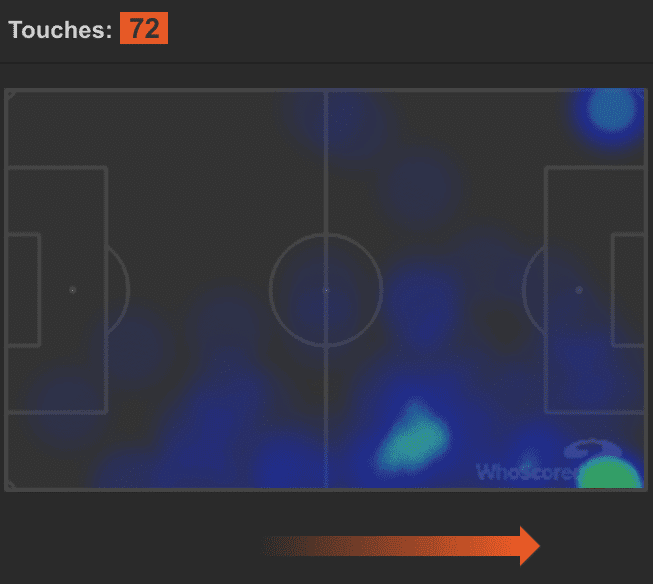 The heatmap above, via WhoScored.com, shows his movement in the final-third. Staying mostly wide, you can see in the blue areas when he drifted inside to the centre of the pitch and also pushing into the penalty area.

Cutting inside on to his stronger foot, he was able to deliver neat balls into the box and was a constant threat to the Palace defence.

He also added three tackles and one interception, with the tackles he won coming in the centre of the pitch.

Playing 4-4-2 can sometimes leave you a little short through the middle, but his tendency to play narrow helped the home side win the numbers battle.

At the start of the second half he showed exactly what he and his left-foot were capable of producing. His first cut-back picked out substitute Sam Baldock, but the striker’s shot smashed off the near post.

Alert to the situation, he chased the rebound out to the corner, drove back into the box and rather than just aimlessly fire the cross into the danger area, he kept his head up and picked out Kayal. The midfielder took a touch, but skied his shot high over the bar.

Going late into the game with the score even, it was March’s quality left peg which set up the winner. His perfect free-kick into the Palace box picked out the head of Uwe Hünemeier. The big German knocked the ball across the goal and Glenn Murray was there to turn the ball home with the faintest of touches.

March won’t get the credit he deserves for his place in the goal, or the victory, but he was a key part of Hughton’s men making the fourth round of the cup.

He doesn’t give the impression he was the speed in his legs to blast down the wing, but he has a quick first-step and the power in his upper-body to keep his man at bay.

If played on the left, there would an expectation to stay wide and get to the by-line. The 23-year-old looked much more dangerous on the right and that’s where the Brighton boss should look to use him going forward.

March has started 13 games in the Premier League this term, making eight appearances off the bench. Monday’s was one of his most impressive and should put him in contention for a more regular spot in the midfield.

This term he has averaged 0.9 shots, 0.8 key passes and 4.7 crosses per 90 minutes. His numbers on Monday far exceeded what he’s provided this season.

At 23 years old, he has time and the ability to improve and he definitely showed his potential against Palace.

He has gone mostly under the radar this season, perhaps this could be the turning point. March is definitely one Brighton player to keep an eye on for the rest of the season.