Solihull Moors are only playing for pride in the final game of the campaign, but visitors Eastleigh have a huge weight on their shoulders ahead of this game at the SportNation.bet Stadium.

Solihull Moors’ five-game winning sequence came to an end following the 1-1 draw with King’s Lynn, who are on the verge of relegation. Eastleigh suffered a major blow to their play-off hopes after conceding a late equaliser in the 1-1 draw with Altrincham. The best predictions for this match are:

Eastleigh need a number of results to go in their favour to finish in the play-off places. The club will be aware that getting a result against Solihull Moors will not be easy after being deflated by the draw in the recent match. Solihull Moors may not have a lot to play for, but the team is in need of a positive end after having missed out on the play-offs. Still, the need for three points will push Eastleigh to a narrow win.

The match witnesses two teams with enough attacking prowess going head on in the final game. A total of 21 goals have been scored in the last six meetings between these two clubs. Ben Strevens has seen his team average almost 2 goals per game in the last six matches, while Solihull Moors have come up with a remarkable 14 goals in the same period.

It is remarkable that all of the last six meetings between Eastleigh and Solihull Moors have been with goals at both ends of the pitch. The match on the 29th will not be any different, as nervousness and focus on results elsewhere might just see Eastleigh slipup at the back. After all, Ben Strevens’ men have kept just one clean sheet on the road.

Analysing the Stats for Betting on Solihull Moors vs Eastleigh

Preview of Solihull Moors vs Eastleigh

Eastleigh will have one eye on the results involving the likes of Chesterfield, Halifax Town, and Bromley. Eastleigh no longer have destiny in their own hands and they have to depend on results elsewhere to finish in the play-offs. Still, coach Ben Strevens should remain confident that his team would get a miracle on the final day.

Doubts about Solihull Moors vs Eastleigh 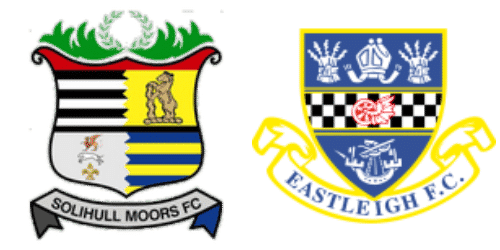 Where is the match scheduled? SportNation.bet Stadium

Which team is the favourite to win? Eastleigh