The Unai Emery era has well and truly begun. Less than a week after being appointed Arsène Wenger's successor, the Spaniard is close to completing his first piece of business as Arsenal head coach.

It's a hugely important piece of business, too, with the Gunners expected to wrap up a £16million deal for Borussia Dortmund defender Sokratis Papastathopoulos (much to the delight of sub-editors everywhere).

Arsenal head of recruitment Sven Mislintat knows Sokratis from their time together at Dortmund and it looks very much like the Greece international will be the first act in a significant overhaul of the squad this summer.

Mislintat was appointed in November and has evidently identified Arsenal's defensive issues as the most pressing. The retirement of Per Mertesacker, Laurent Koscielny's ruptured achilles tendon and Shkodran Mustafi's worrying loss of form have combined to intensify the need for recruitment at the back and signing Sokratis will certainly contribute to solving the problem.

Wenger's final season was not one defined by defensive stability. Arsenal conceded 51 goals in the Premier League, 13 more than anyone else in the top six, 12 more than Burnley, four more than Newcastle United and just five fewer than Swansea City and West Bromwich Albion, both of whom were relegated.

It paints a bleak picture of the problem area within the Arsenal squad. While the Gunners have quick, technically proficient attackers, they have not been able to rely on their goalkeeper – an upgrade on Petr Čech is expected to arrive this summer – and the men in front of him.

But, with Sokratis set to arrive and Stephan Lichsteiner and Çağlar Söyüncü also linked with moves, reinforcements are on their way.

At 34, there are question marks over how prominently Lichsteiner will feature in the first team next season, but Sokratis looks a particularly shrewd acquisition.

Of course, Arsenal fans should temper their expectations. Sokratis is costing £16million, not £75million, which, going off Virgil van Dijk's move to Liverpool, is what it takes to capture a truly world-class defender.

Sokratis may not be a marquee, game-changing arrival but there are a number of factors which have informed Arsenal's interest.

Firstly, he's experienced. With Mertesacker gone and Koscielny out until December, Emery has been left with a considerable amount of inexperience in defence. Calum Chambers is still only 23, Rob Holding's a year younger, while Konstantinos Mavropanos, although tipped to be a future star, is only 20 and has 195 minutes of Premier League experience to his name – 195 minutes and one red card.

The rationale behind signing Sokratis is clear: bolster the experience in the ranks with a player who will fit Emery's philosophy. The bonus will be Sokratis mentoring his young compatriot Mavropanos.

The frequency with which Arsenal conceded last season suggests a lack of organisation and communication at the back. Fortunately, Sokratis is a commanding presence in defence.

When Mats Hummels left Dortmund for Bayern Munich in 2016, the club lost a leader and, while Marcel Schmelzer was handed the captain's armband, Sokratis certainly stepped up. An early criticism of Sokratis at Dortmund was his positioning. The Greece vice-captain would often push up to break up the opposition's attacks early. When he failed to do so, Dortmund were left exposed.

However, Sokratis improved substantially under Thomas Tuchel and he became reliable in the biggest games, notably slotting Robert Lewandowski into his back pocket during a win over Bayern Munich after having starred in the Revierderby against Schalke.

At Dortmund, Sokratis has grown to become one of the most astute defenders with the ball at his feet. His 62.64 accurate passes per 90 minutes places him sixth in the Bundesliga, and he is also sixth in forward passes, with 26.26 per 90.

Crucially, Sokratis is also strong in the air, having won 3.14 aerial battles per 90 this season. That's almost identical to Koscielny's 3.23 average. In fact, the duo are very similar in a number of categories, as illustrated by our Player Persona comparison below. 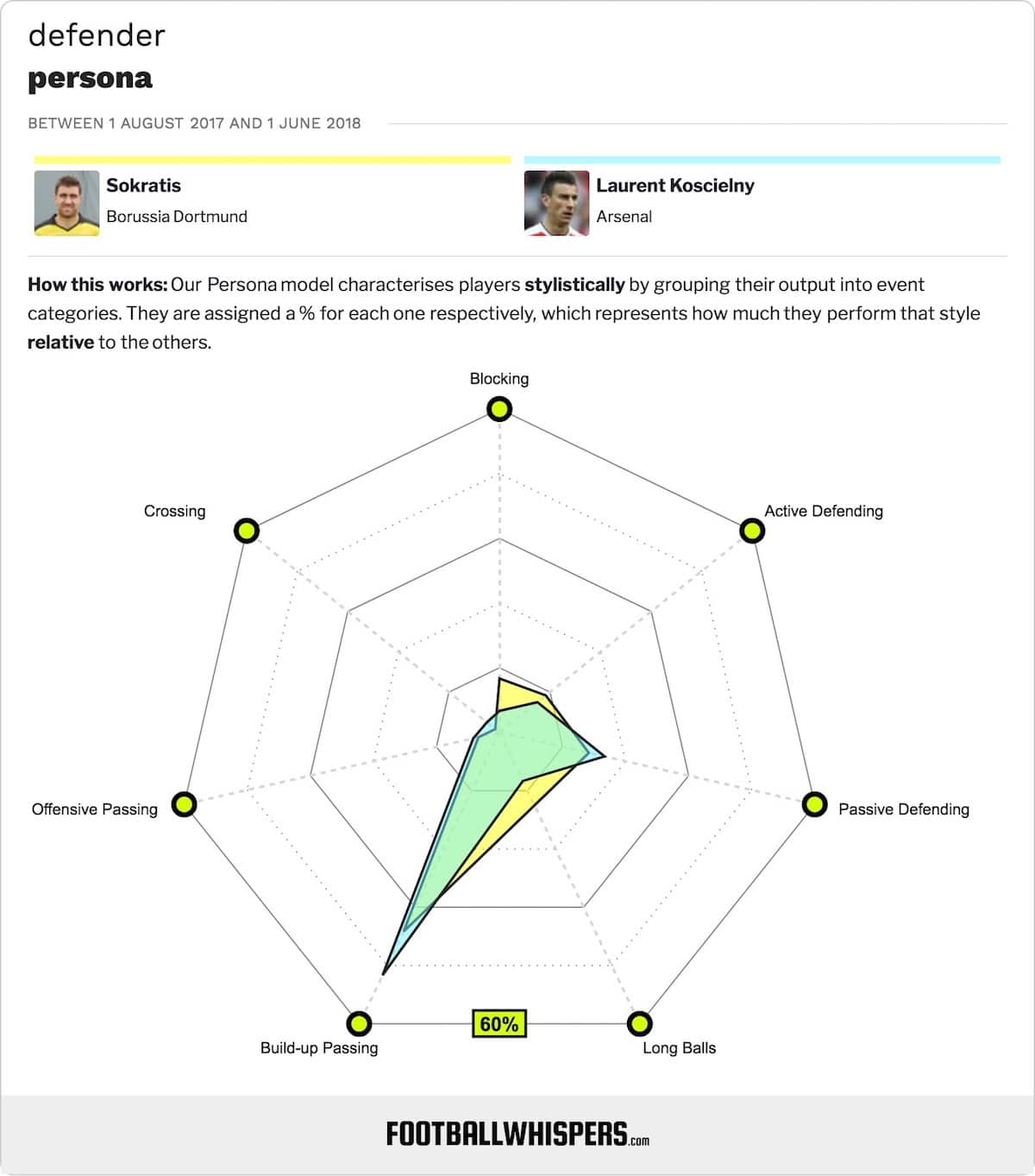 Both Sokratis and Koscielny rank highly in build-up passing, with the Dortmund man coming out on top in blocking, active defending and long balls.

It makes sense that Arsenal's recruitment team would target a player stylistically similar to Koscielny, who has been well and by far the club's most consistent performer at the back in recent seasons.

It would be wrong to paint Sokratis in a purely positive light though. He has, like many Dortmund players, just finished a difficult campaign at the Westfalenstadion.

Peter Bosz was sacked just four months into the season and, while Peter Stöger steadied the ship enough to just about claim a spot in next season's Champions League, it has been a tumultuous campaign in which most of the squad have struggled.

That includes Sokratis. The 29-year-old completed fewer blocks, interceptions and won fewer aerial duels per 90 this season than during the 2016/17 campaign. However, that is more an inevitable by-product of Dortmund's broader troubles than any dramatic individual decline on Sokratis' part. 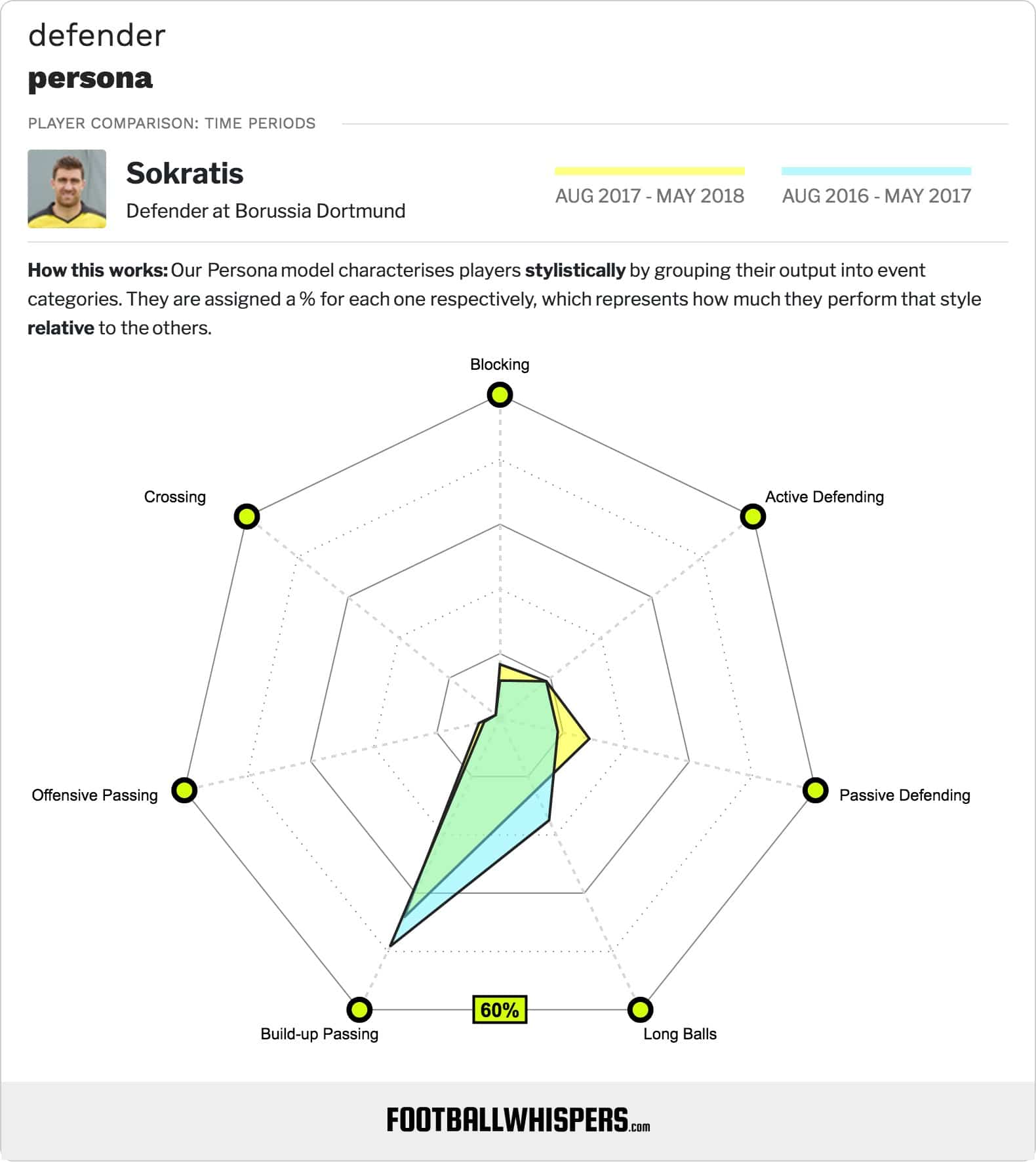 With plenty of experience for both club and country, Arsenal are hoping that Sokratis can be a slot-into-the-team-immediately kind of signing. Whereas Mavropanos needs time to develop, his more battle-scarred countryman can help abate Arsenal's defensive woes in their first season under Emery.

The coach has a proven track record of building solid defences, particularly at Valencia and Sevilla, and it looks as though he has the first piece in his Arsenal puzzle – and it's a piece that will bring experience, leadership and a much-needed authoritative voice to the backline.