Robert Snodgrass belongs in the ‘refreshingly honest' category of professional footballers. Whereas most are perfectly content to go through the motions via a series of pre-planned, monotonous responses in press conferences and interviews, there are those who are willing to go off-script.

The spotlight on a Premier League player is intense. They know every word is closely scrutinised and unpacked. With that, the endless stream of ‘one game at a time' soundbites on Match of the Day is entirely understandable.

But for every James Milner, there's a Charlie Austin or a Snodgrass.

The latter, in particular, has given some doozies over the last few years. Then again, Snodgrass has had much to vent after a challenging two years since he left Hull City for West Ham United in January 2017.

Signed for £10.2million just as Dimitri Payet was in the process of exiting the London Stadium, the Scotland international thought he'd hit the big-time.

His time at Hull had been, at first, haunting, then hugely rewarding. His debut season with the Tigers ended before it truly began, a dislocated kneecap in August ruling him out for the entirety of the 2014/15 campaign.

When he eventually returned, 16 months down the line, Hull were back down in the Championship. Keen to make up for lost time, though, Snodgrass quickly became a crucial cog in Steve Bruce's side, helping the coach clinch his record-breaking fourth promotion to the Premier League via a play-off win over Sheffield Wednesday.

Back in the top flight, Snodgrass managed to flourish despite Hull's struggles. His departure was a devastating blow to a side lying second from bottom but the winger had undeniably earned a shot to prove himself at a club with European ambitions.

With seven goals and three assists from 20 appearances, West Ham thought they were inheriting one of the division's most consistent wide men. But Slaven Bilić intervened.

The Croatian was guilty of misusing Snodgrass, deploying him on the left as a direct replacement for Payet as opposed to on the right or behind the striker, where he had played all season for Hull.

Snodgrass obviously struggled as a result and was sent on loan to Aston Villa.

Then came an enlightening interview in which the player revealed how he quickly came to the galling realisation that his time under Bilić would be testing.

“I realised from the off that it wasn’t going to happen,” Snodgrass told The Herald. “I was coming on against Manchester City and he [Bilic] said ‘where do you want to play, on the left or right?’ I thought ‘You’ve just signed me and I’ve played on the right or behind the striker at Hull City all season’.

“I found it very strange,” he added. “That was my debut. And every time I played I was on the left. Alarm bells were ringing right away. I don’t know why he did it.”

Bilić's belief, Snodgrass said, was that confidence allows a player to play anywhere, perhaps offering further alarming insight into why his tenure at the Irons ended with the club languishing in the relegation zone.

In August 2017, having been branded a bitter disappointment and staring down a place warming the bench following Marko Arnautović's arrival, Snodgrass joined Villa on a season-long loan, reuniting him with Bruce.

Playing in claret and blue for a different team was productive. Snodgrass rebuilt his confidence, scoring seven times and notching 14 assists to once again help a Bruce-led side to the play-off final. There was to be no repeat of his Hull heroics, however, as Fulham sealed their Premier League spot with a 1-0 win.

Back at the Hammers, Snodgrass was told he would not be returning to Villa Park. He was also told by new manager Manuel Pellegrini that he figured prominently in the Chilean's plans at West Ham, provided the winger shifted a bit of the weight he had gained during his year at Villa. 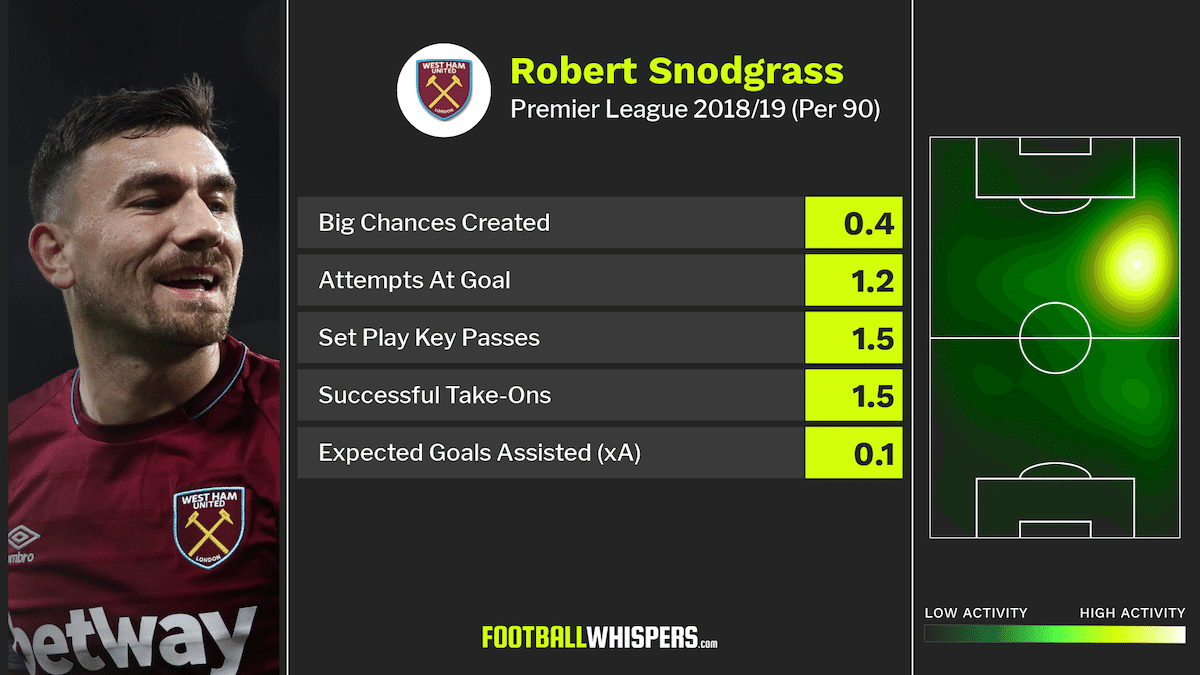 Following Pellegrini's demands, a combination of hard graft and good fortune restored Snodgrass to the Hammers line-up. Having featured sporadically over the first two months of the season, the 31-year-old benefitted from Andriy Yarmolenko's achilles injury.

Initially finding a place in midfield alongside Mark Noble, a recent switch out to his favoured right flank has paid dividends. Just 11 minutes into his first start in his preferred position, Snodgrass delivered a peach of a cross to Javier Hernández to for West Ham's opener in the 3-0 win at Newcastle United.

Another two assists followed in the 3-1 win over Cardiff City before capping a fine seven days in style with his first Premier League goal for the club, curling a brilliant strike into the corner for the equaliser in Saturday's defeat of Crystal Palace.

The stats reflect his reemergence, too. Snodgrass tops the set play key passes per 90 category for players in his position with 1.48 while his total haul of aerial duels won (13) and tackles (19) show an attack-minded player who does not neglect his defensive duties.

West Ham fans have reason to be cheerful. With three wins on the bounce, things are looking up. Hernández has recaptured his scoring touch, Issa Diop has a bright future in defence while, in Felipe Anderson, the club has found a playmaker with the ability to bring supporters to their feet.

And, while the Brazilian may grab the headlines on a regular basis, that Snodgrass has shed some unwanted timber and nailed down a place in Pellegrini's squad is a testament to his own resilience and determination.