Manchester United‘s imminent capture of Victor Lindelöf in a £30million deal from Benfica means that England international Chris Smalling could be surplus to requirements at Old Trafford.

There is a belief that Smalling could be acquired for around £15million which, in the current market, would represent somewhat of a bargain for a player of his vast experience at the highest level.

In his seven years at Old Trafford the general consensus among fans is that Smalling has never truly fulfilled his potential, and few would be too sad to see him depart this summer.

However, although he may no longer be the right man for the Red Devils, there are reasons to believe he could be a solid option for Arsenal.

Arsenal's Back Three Could Suit Smalling

In mid-April, Arsène Wenger's decision to join the back three craze that swept the nation last season paid dividends for the Gunners. With a 3-4-3 set-up they won nine of their final 10 fixtures, including an FA Cup final triumph over Premier League champions Chelsea.

It may not have been enough for the North London side to claw their way back into the top four, finishing outside the Champions League qualification places for the first time in a couple of decades, but the new system showed enough promise to be revisited next season.

Smalling has some experience playing in a three-man backline, sparingly under José Mourinho last season and more extensively during the early part of Louis van Gaal's Old Trafford reign.

Although he's much more accustomed to a back four, the 35-cap Three Lions star could find himself a lot more effective in a back three.

Traditionally, a back three would be comprised of a sweeper in the centre — the most technically able of the trio, dropping deep to act as a last line of defence and bringing the ball forward to instigate attacks when in possession — and two stoppers either side, whose role is to mark the opposition's forwards and engage oncoming attackers.

This formula worked to perfection for Chelsea last season, with David Luiz reborn as a skilled sweeper, or libero, utilising his wonderful range of passing and benefitting from the added assurance or having two defenders either side of him, giving him the freedom to move into the midfield zone as he enjoys.

With Gary Cahill and Cesar Azpilicueta acting as the stoppers, the Blues' backline had tremendous balance thanks to the knowhow and experience of the two natural defenders, perfectly complimenting their free-spirited Brazilian colleague.

Cahill bounced back from a torrid, error-strewn 2015/16 campaign to be one of Antonio Conte's more dependable performers last term. The former Aston Villa defender appeared to relish the simplified tasks he was required to undertake as a stopper in a back three, asked to take risks with his forward passing and instead allowed to focus purely on his basic defensive tasks.

Smalling, a technically flawed passer who himself is too prone to errors, could benefit similarly as part of Arsenal‘s back three. The United man would be wholly unsuited to playing as the central sweeper, lacking the ability to consistently identify and execute vertical passing opportunities. But as a stopper, a role in which he'd be able to train his focus on what he is good at, the 27-year-old could be highly effective.

With Per Mertesacker slow and lacking athleticism, Rob Holding still developing and Gabriel Paulista unreliable, a back three of Smalling and Shkodran Mustafi either side of Laurent Koscielny, on paper at least, looks formidable. 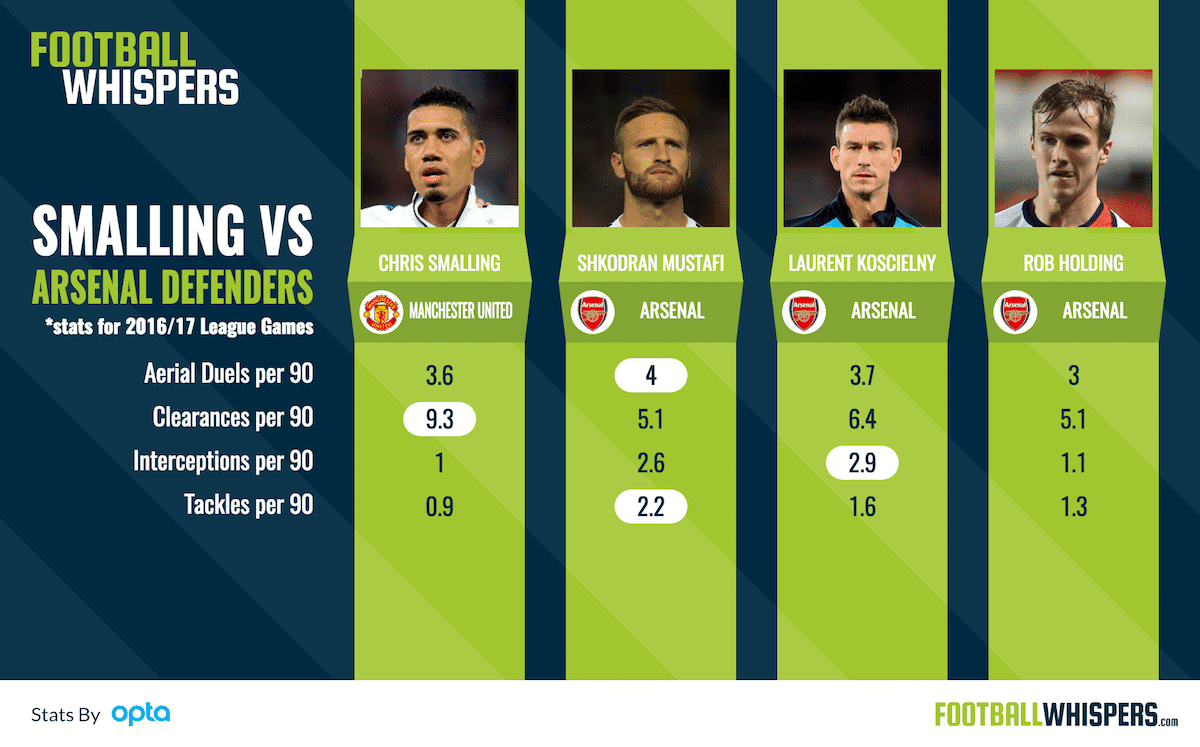 At 6ft 4ins, Smalling is a commanding physical presence in both penalty areas. His average of 3.6 successful aerial duels per 90 minutes last season could only be bettered by Mustafi (four) and marginally by Koscielny (3.7) of all the Arsenal defenders with more than one Premier League appearance to their name.

The former Fulham player has also developed his positional awareness in recent years, always stationing himself well when defending balls into the box. This allowed him to make a staggering 9.3 clearances per 90 last term, more than any Arsenal player.

When it comes to tackling, prevention is better than cure. AC Milan legend Paolo Maldini famously said that if he ever needed to make a tackle it was because he had already made a mistake.

Sound anticipation and astute positioning often negates the need for a challenge, and Smalling's 0.9 tackles per 90 in 2016/17, fewer than any Arsenal defender bar Barcelona transfer target Héctor Bellerín (also 0.9), demonstrates than the United centre-back is experienced enough to avoid having to tackle where possible.

It would be desirable for Smalling to be a little calmer under pressure than he tends to be, perhaps learning not to hurry so much and convert some of those clearances into interceptions, retaining possession for his side.

But it's a relatively minor gripe considering the centre-half, maligned inside Old Trafford, could have plenty of value for Arsenal.