This summer Serie A turned into Alexis Sánchez, Matteo Darmian and Chris Smalling were deposited in Italy's top flight.

At the time, the Red Devils would have chalked those deals up as a success. Just three months into the season they've been left with egg on their faces once more.

Lukaku has hit nine in 11 Serie A appearances for Internazionale while Darmian is reportedly wanted by the Nerazzurri after impressing at Parma. Most galling of all, though, Smalling is thriving on loan at Roma as United's remaining centre-backs struggle for form at Old Trafford.

The England defender was one of the lightning rods for supporter frustrations at Manchester United. It was felt a new environment and a clean slate would do the 29-year-old the power of good. So it has proven.

So much so, in fact, Roma have already seen a £13million bid knocked back while Milan and Inter are both keen.

There have been plenty of missteps in the transfer market from Manchester United since Sir Alex Ferguson and David Gill left the Theatre of Dreams in 2013. On this occasion, the much-maligned Ed Woodward might have pulled off a masterstroke by leaving out the option of a permanent switch for Smalling.

That would enable United to either bring the 31-cap England international back to the Premier League next summer or sell him at a higher price if there is still a market for his services.

Smalling's number of admirers is growing and with good reason. The widely held view in the Eternal City is the Englishman has been Roma's outstanding defender this season and he has gone a long way to filling the Kostas Manolas-shaped hold in the heart of the Giallorossi's defence with commanding displays, even earning the nickname ‘Smalldini' – so-called after Italian great Paolo Maldini.

His stock only rose on Saturday as he pulled off a remarkable goal-line clearance in Roma's win over Napoli.

What a world-class goal-line clearance from Chris Smalling!!! ??❤ pic.twitter.com/oxLsz7hK8Y

It's an incredible turnaround. A few months prior, Smalling wasn't even Roma's first-choice transfer target. After 23-year-old Gianluca Mancini signed from Atalanta, the Giallorossi wanted a more experienced partner for him.

Moves for Tottenham Hotspur‘s Toby Alderweireld, Juventus‘ Daniele Rugani and German Pezzella of Fiorentina all fell flat. So Roma turned to Smalling at a knockdown price of €3million for the season. 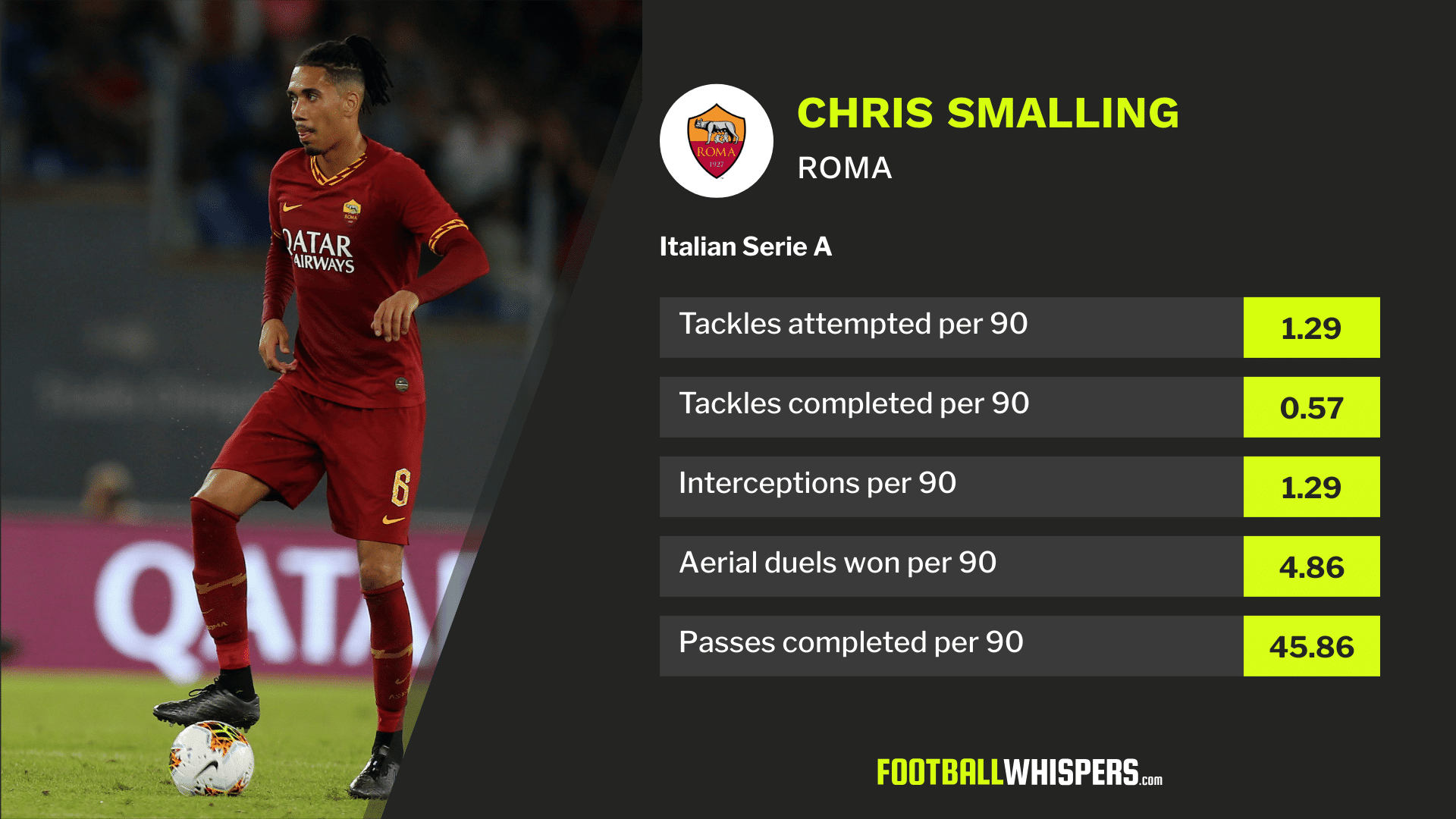 But Smalling was an ideal fit for new Roma coach Paulo Fonseca's vision. The Portuguese likes to play with a high line making pace an essential ingredient for any defender – something the 29-year-old boasts.

“I find it's been brilliant [with Fonseca],” Smalling told the club's website. “In terms of our first conversation, I spoke to him on the phone from Manchester and he was just explaining the type of defender he wants, how he saw my attributes and how he wanted me to play within his team.

“And that gave me a real sense of things, and as soon as I was off the phone it was a case of, ‘Let's make this happen'. And since then it has been great to work with him.”

It was a far cry from Old Trafford where United boss Ole Gunnar Solskjær was keen to trim the number of centre-backs on his books, making Smalling the odd man out. However, the Norwegian left the door open for former Fulham stopper to return to Old Trafford.

“Chris fancied the chance to go over there; it's a new experience, new adventure,” Solskjær told Manchester United's website.

“He'll come back better for it because it's a big club, it's a good league. There aren't too many English players who have been playing in Italy so I think he'll enjoy it.”

It's far from a foregone conclusion Smalling will return – and why would he? United invested a world-record fee to prise Harry Maguire out of Leicester City while Victor Lindelof is viewed as his preferred partner.

Rightly or wrongly, Smalling was often viewed as a symbol of Manchester United's decline. Signed as a raw but promising young defender from Fulham, he never quite grew into the player Ferguson hoped he would become and soon became synonymous with failure at Old Trafford in the fallow years since the Scot's retirement.

Written off, Smalling has risen again in the Roman ruins of the Eternal City.