It’s tough being a defender in modern day football, let alone at the very summit of the sport. Coaches now demand players at the back provide much more than just an ability to stop shots and goals while FIFA’s continual evolution of the laws always favours attacking players.

Influential managers such as Pep Guardiola and Maurizio Sarri demand you must be as much as a reader of the game with the ball at your feet as you are without it. Offensive moves start from the back and a defender’s passing proficiency and ball retention are now more important than tackling accuracy or aerial prowess.

So much so, as Guardiola famously said: “I’m not coaching tackles. I’m not training for tackles… what’s tackles?”

It’s a position and role that’s arguably changing and developing more rapidly in identity than any other on the field. What constitutes a good defender is no longer as definitive as it once was. No wonder few get recognised on Ballon d’Or or on player of the year shortlists.

Italy has always been a country that has embraced the noble art and is responsible for many of the greatest exponents of the discipline, in particular at centre-back: Gaetano Scirea, Claudio Gentile, Franco Baresi, Paolo Maldini, Alessandro Costacurta, Alessandro Nesta, Fabio Cannavaro and in the modern age, Giorgio Chiellini and Leonardo Bonucci.

That lineage has also been transferred to the volume of foreign defensive talent which has passed through Serie A down the years with the likes of Laurent Blanc, Paolo Montero, Jurgen Kohler, Lillian Thuram and Thiago Silva developing into some of the world’s best while playing in the country.

Inter’s Milan Skriniar appears to be the next name on the list but with a modern twist as the Slovakian can defend with the raw commitment and authority of an old-style centre-back while possessing a calmness and presence on the ball of the best midfielders.

According to reports in Italy, the 23-year-old has been subject of two unsuccessful €60 million bids from Manchester United and Manchester City as the Premier League giants seek to take advantage of the Nerazzurri’s financial predicament with UEFA.

But, despite Inter needing to raise around €40m in the next month to meet FFP criteria and avoid a penalty, the club hierarchy have declined the offers.

And given influence in guiding them into the Champions League and the increasing importance of the position and scarcity of quality in that area, it’s no real surprise. Because if he continues on this upward trajectory he could easily out-strip Kyle Walker’s record as the world’s most expensive defender.

Skriniar has come a long way in a very short space of time and although it may seem he’s headed for a career bump at some stage, every challenge he’s met and exceeded expectations and with Inter in the Champions League next season, gives him another stage on which to shine.

He, along with striker Mauro Icardi, has been the club’s only genuinely consistent performer in a campaign that threatened to turn into a football and financial catastrophe had they not beaten Lazio on the final day of the season.

Now he will form one of the top centre-back pairings in Europe next season with Dutch international Stefan De Vrij moving to the Giuseppe Meazza on a free transfer.

Just two years ago, Skriniar was a largely unknown prospect from Zilina who had been signed by Sampdoria for €1m and was preparing for Euro 2016 following an unexpected but welcome call-up to the Slovakian squad after just two caps.

His first appearance in the tournament would have barely been recognised in a wider sense as he came on for the last 12 minutes as England toiled to a 0-0 against the Slovaks. He then played the entire 90 minutes of their 3-0 defeat to Germany in the knockouts in central midfield.

There was uncertainty over where his best position lay and in the early stages of his career he tended to operate as a defensive midfielder. It wasn’t really under Marco Giampaolo got hold of him at Sampdoria and made him into a centre-back that he truly flourished.

His ball-playing skills and positional awareness as a midfield anchorman were combined with the tactical awareness that comes with Italian defensive tutelage and soon Skriniar began to emerge as a force in Serie A.

Samp boasted the best defence outside the top seven clubs in Serie A and at the heart of it was Skriniar who proved one of the best passing centre-backs in the league; his 49.95 passes per 90 at an accuracy of 91.5 per cent placed him 17th.

His arrival in Milan barely registered outside of Slovakia (as he became the country’s most expensive footballer) as, buoyed by Chinese investment, both of the city’s clubs went on a major summer investment in 2017, yet Skriniar’s €20m arrival has proved the best of the bunch.

The passing proficiency has increased as he’s averaged 57.13 accurate passes per 90 at an accuracy of 91.2 per cent (ninth among centre-backs in Serie A), 24.1 of which are forward (ranking eighth) and is 0.05 accurate through-balls places him third. 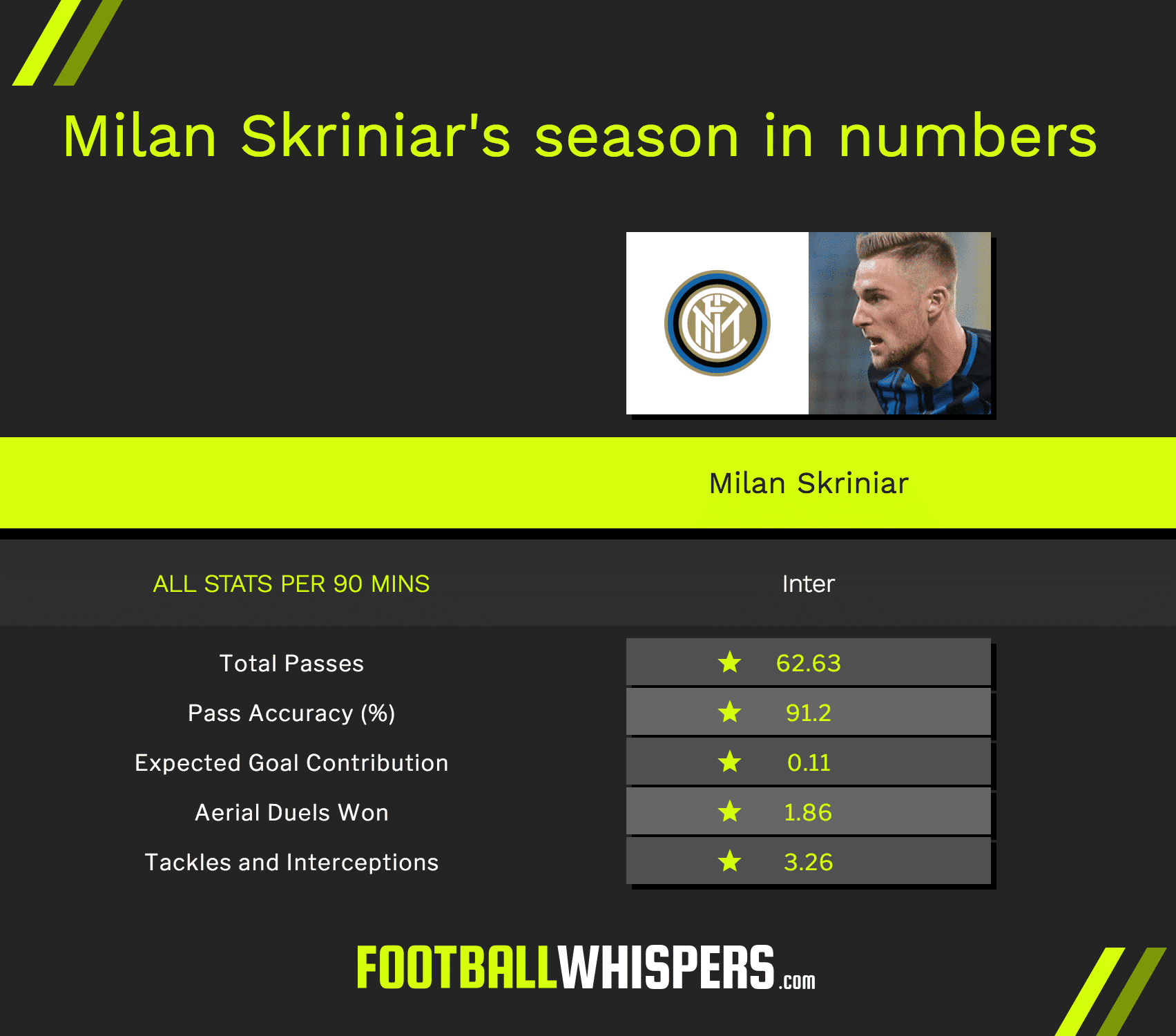 In terms of expected goals contribution (xG plus xA) no defender has a higher number than Skriniar’s 4.56 as he’s played every single minute of Inter’s campaign.

But what underlines where he is in his career, and where he’s headed is the incremental improvement as, with the exception of interceptions per 90 (which can probably be attributed to having to do more actual defending at Samp than Inter), Skriniar has produced better number across every individual metric.

From a visual point of view, at 6ft 2ins he’s tall and strong to be a physical presence but possesses that agility to either carry the ball comfortably or change direction quickly when being dribbled at.

Those scenarios have often produced the standout moments of any highlight reels as Skriniar has a real knack of reading situations, keeping his concentration and feet and making tackles at precisely the right time, never really appearing stretched, or over-committing himself with little sense of the last ditch.

There is a quiet assurance with everything he does on the field, never hurried or panicked. And amid the chaos that Inter’s season threatened so often, it was vital in bringing balance to the team on the field.

What does count against him, which makes him a throwback to some of the aforementioned legends, and is an attribute coaching cannot improve, is his pace. Skriniar is not particularly quick, especially over long distances and for managers who like to play high defensive lines that could leave him exposed.

He does compensate with his awareness and reading of the danger which often eradicates any threat of him being isolated 1v1 against a quicker attacker but, of course, Italian football can be played at a slighted more sedate pace than, say, the Premier League.

But assuming Inter do dig their heels in and hold onto him, the Champions League gives another opportunity to witness his progression and test this theory as the likes of Lionel Messi, Cristiano Ronaldo, Robert Lewandowski, Neymar, Antoine Griezmann and Sergio Aguero come into view.

But, based on what we’ve seen so far, the man known in Slovakia as ‘Skrinka’ – the locker – still has plenty more in his own.