Sam Allardyce has a 100% record as England manager! Just like the eight prior incumbents of the national manager’s hotseat – stretching back to Graham Taylor in 1990 – Big Sam made a winning start on his Three Lions’ bow with a 1-0 victory over Slovakia.

The frustrating match in a sweltering Trnava looked as if it would go the same way as the statemate these two nations played out in Saint-Etienne at Euro 2016 a little over two months ago, as England left it late against stubborn Slovakia’s 10 men.

Martin Skrtel’s 57th-minute dismissal for a second yellow card proved the main difference between that European Championships deadlock and this 2018 World Cup Qualifier – a first international goal from Adam Lallana in injury-time meaning Big Sam’s England era got off to a winning start.

But how did the new-look England fare under the ever-watchful eye of Football Whispers HQ? Here we give our marks out of 10 on the first step of the Road to Russia 2018…

The new Torino man’s head must have been spinning after his deadline day dash to Turin. But having been entrusted with the gloves by new gaffer Allardyce, you cannot argue with a clean sheet.

Given the boot at Manchester City by Pep Guardiola for his (lack of) kicking ability, Hart proceeded to shank his first kick of the match from a back pass. A passenger for most of this fixture as Slovak coach Jan Kovak once again ordered his men to build a white wall on the edge of their 18-yard box, Hart will be grateful for 90 relatively quiet minutes.

Got the nod from Allardyce over Liverpool’s Nathaniel Clyne and made a steady if unspectacular start to the brave new world. One of eight players retained from the starting XI in England’s Round of 16 2-1 embarrassment at the hands of Iceland, the Tottenham man made a solid enough contribution on the right-hand side.

As in that nightmare night in Nice on 27 June, Walker had few defensive duties to attend to but failed to adequately provide the width and accurate crossing required against a Slovakia side intent of defending the width of their 18-yard box.

Apart from an early loose touch that almost presented Dusan Svento with a goal, Rose was a class above his Spurs colleague in the opposite full-back berth. The diminutive defender is sure to add to this eighth senior cap on the Road to Russia. Up and down the left touchline with power and purpose, the 26-year-old is likely to become a staple of the Allardyce regime – with some healthy competition coming from the recuperating Luke Shaw.

The full-back’s tenacity and composure – plus a little luck at the crucial moment – in the dying moments carved out the chance for Lallana to net the winner. Expect Rose to be in the back four in the next qualifier at Wembley against Malta on 8 October.

Little to trouble the Chelsea man in truth from Slovakia’s one-man attack – Michal Duris. Knowing Allardyce from his days in the dug-outs of Sunderland, West Ham et al, nailing down a central defensive partnership that picks itself will be at the top of his ‘to do’ list.

A night of few heart-stopping moments for former Bolton Wanderers man, Cahill seemed to be the man to make the telling heading clearances whenever the hosts did sling a ball or set-piece into the England penalty area. At 30 years of age, and under the tuition of two scholars of the defending school of hard knocks – Allardyce and club boss Antonio Conte – the time has come for Cahill to become the rock of the back four.

After his £50 million Manchester City move, 2016 presents a fork in the road for the 22-year-old. As expected, the former Everton man was tasked with using his touch and technique to bring the ball out from the back and, in fairness to Stones, the lack of the spark from that point of the pitch onwards he could do little about.

Like Cahill, in the few instances that the likes of, the ineffectual, Marek Hamsik and Jan Gregus did make a charge into the Three Lions’ den, Stones looked steady enough… tougher assignments lay ahead for England’s big hope.

Not the Tottenham youngster’s fault as such, but the need for a defensive midfielder looked unnecessary even before kick-off. As at the Euros, Slovakia’s game plan was to nick a point – fortunately for England they did not succeed in their mission as they did in France – so perhaps Dier’s presence will be better served against the likes of Spain in November’s friendly at Wembley.

It was well publicised that Dier was off-colour and nursing an ankle injury as Roy Hodgson hauled him off at half-time during the Iceland Euros debacle, but at just 22 years of age expect Dier to play a pivotal part in Allardyce’s tougher tests.

Did little to warrant the hype or his 27th senior cap. Has started all three Premier League matches for Jurgen Klopp this season, as you would expect as Liverpool captain, but looks like he could be part of the dead wood from Euro 2016.

As in the last meeting between these nations, the midfielder looked busy in the middle third but offered minimal attacking threat. No blame can be imparted on Slovakia for trying to hold out for a point against the top seeds in their qualifying group – just as there was no blame to bear in the Euro group game.

Slovakia will not be England’s only World Cup qualifying opponents to stick 10 men behind the ball – Lithuania, Malta and, dare we say it, Scotland are likely to adopt similar tactics. The emphasis will be on Allardyce’s midfield and forward lines to produce a piece of magic or a slick move to pick open a tough lock – sadly, Henderson has shown few glimpses of such skills in an England shirt. Replaced by Allardyce for Dele Alli in the 64th minute. 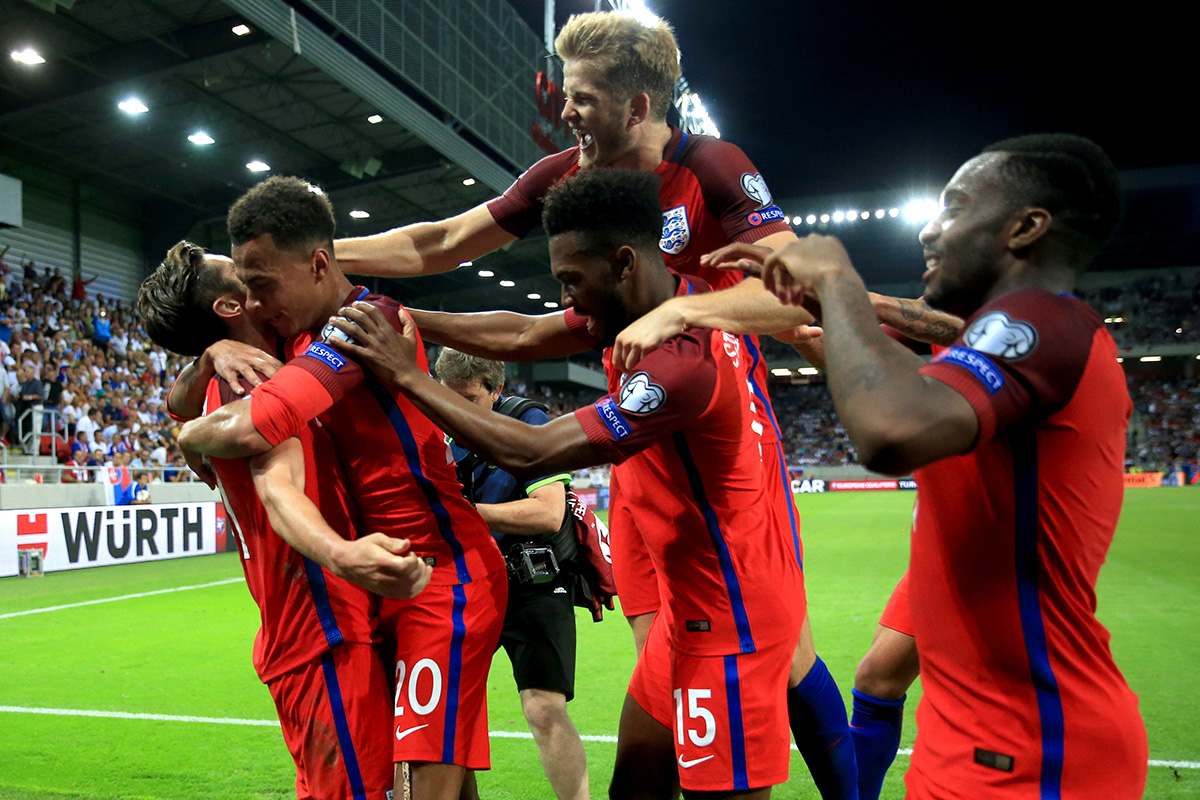 Finally a goal for the Liverpool playmaker in his 27th international. A lack of goals seems the only thing preventing the quick-footed schemer from nailing down a regular place in the Three Lions’ starting XI.

One of few players to come out of England’s French failure with a modicum of credit – former boss Hodgson inexplicably axing the Reds’ man in favour of Raheem Sterling against Iceland – Lallana would seem to have the tight control and quick feet to break down a packed penalty box.

Had already hit the post with a long-range drive before being Johnny-on-the-spot for his injury-time winner, showing a cool head and ambidexterity to shift the ball from right to left foot before rifling home through the legs of Slovakia stopper Matus Kovacik.

Some will see six out of 10, while others will see two threes… are you still following me? The point being – ask two people sitting next to each other at a football match what they saw and you will most likely get two different answers.

Many saw Rooney, kept on as captain under Allardyce, ‘boss’ the game in Trnava from the deeper-lying midfield position that became the norm under Louis van Gaal and Hodgson last season. Meanwhile, others will say the Manchester United No10 once again showed he no longer has the legs to make the difference at international level.

Any man making his 116th appearance – a new Three Lions record for an outfield player – is likely to be coming to the end of his international career. Indeed, Rooney has already admitted this will be his last England qualification campaign – but will Allardyce be brave enough to drop his captain if his England form continues waver?

Poor performance. Despite making a bright, scoring start to the Guardiola era at Manchester City, Sterling seemed off the pace on a steamy night by the Trnavka River.

Seemingly unwilling – or unable – to take on his full-back Tomas Hubocan for the most part, the winger fashioned few goalscoring chances for himself of his team-mates – he did drag one glaring chance wide of the mark from close range in the 39th minute. Allardyce will surely be keeping a close eye on 21-year-old ahead of his second squad announcement next month. Replaced for Theo Walcott in the 71st minute.

Perhaps Allardyce’s biggest tactical success of the night – Kane was not on corner duty! Yet to score for Spurs in their opening three Premier League games, like Sterling, England’s No9 looked off the pace – although, having his right ankle stamped on for Skrtel’s dismissal will not have helped his mobility.

Not usually shot shy, Kane mustered just a handful of England’s 20 shots on Kovacik’s goal and hit a fresh air shot in the first half from close range. Became swallowed up by the white wall of Jan Durica, Vikor Pecovsky and Skrtel. Replaced by Daniel Sturridge after 82 minutes.

A win’s a win – and England start their qualification campaign with maximum points. Like their new manager, who said he was ‘relieved’ to snatch a late victory against a resolute Slovakia side, Three Lions’ fans will of course be glad to have got the ball rolling to Russia.

However, a 4-3-3 formation and just three changes from the starting XI of that Euro exit to Iceland will not have gone down too well with large sections of the travelling support in Western Slovakia – many of whom will have paid through the nose in Nice to watch something very similar in their country’s biggest footballing upset back in June.

It would seem as if Allardyce is likely to make adjustments here and there to the side rather than sweeping squad changes to begin his reign with, at least. The recall of Theo Walcott and a first call up for Michail Antonio would seem to suggest that a switch to 4-4-2 could be the cards… but what would that mean for captain Rooney?

Like Walcott, Dele Alli came off the bench to inject some much-needed intent to the England attack – but will Allardyce utilise the Tottenham Alli-Kane link?

The next international break sees England host Malta on 8 October before a trip to Slovenia on 11 October.