Coventry City has been something of a club on the brink in recent seasons. They’ve slid to their lowest position in the Football League since the 1950s, been through a succession of managers, not to mention owners who, it would appear, couldn’t care less about their plight, and for long periods been without a permanent home; but it was a different story in 1987 when they lifted the FA Cup on a balmy day at the old Wembley stadium.

Unlike today, Coventry was a well run, top-flight outfit back then. Under the guidance of managerial partnership of John Sillet and George Curtis they had finished 10th in the old First Division in what can only be described as a pretty non-eventful league campaign, though their route to Wembley was anything but.

Having beaten Bolton Wanderers at Highfield Road in the Third Round City were drawn against Manchester United at Old Trafford in the next round, under the watch of their new manager, a certain Alex Ferguson, who was struggling to steady an increasingly unstable ship since his arrival just two months earlier.

Despite United’s precarious position they were still favourites to beat the Sky Blues, but on a bone-hard, frosty surface, a scrappy Keith Houchen goal late-on provided the shock of the round as Coventry ended United’s season and ensured it was their name in the hat for the Fifth Round draw and not that of their more famous opponents.

A routine 1-0 win against Stoke, again thanks to Houchen, set up a huge quarter-final tie at Hillsborough against Sheffield Wednesday, a team who were struggling badly at the time, even so, Wednesday had an impressive cup pedigree to say the least and were far from a pushover.

The blue touch paper was very much lit when Wednesday’s manager Howard Wilkinson claimed before the game: “This is our tenth quarter-final match in three and a half years and that's quite a record. Coventry have never been beyond the sixth round and that makes it a big psychological barrier for them to clear,” it was clear that he was prepared to resort to anything in able to gain an advantage over his opposition.

As it turned out Coventry weren't rattled by Wilkinson's pre-match remarks and and skipper Brian Kilcline even pointed out that his team had: “faced enough tension in the past with their various relegation scraps, so an FA Cup quarter final held no fears,” and cheered on by 15,000 away supporters, Coventry  were as good as their captain's words.

Coventry had the better of things in the early stages, and fully deserved their lead when Regis put them ahead on the quarter hour, but Wednesday rallied immediately and levelled through Gary Megson – it was the first goal Coventry had conceded in the cup that year.

But City took it in their stride and Keith Houchen – who had scored in every round so far – put them ahead in the tie once again in the 78th minute, followed by another just five minutes later to put Coventry in the FA Cup semi-finals for the first time in their history.

In that semi-final, Coventry would face Second Division opposition in everything but name, the mighty Leeds United, at Hillsborough in front of a full house. It was United’s first semi-final appearance in ten years but the two sides more than matched each other in one of the most exciting last four encounters for years.

David Rennie's early header had given Leeds a 1-0 lead for much of the game and it looked like they would hold on, until the introduction of Micky Gynn turned the match on its head.

Equalizing on 70 minutes his goal gave City hope before Keith Houchen – adided by Gynn – made it 2-1 ten minutes from time. But Leeds weren't done under the watchful eye of manager Billy Bremner and Keith Edwards equalisde late on to ensure the watching millions were treated to another 30 minutes.

But it was to be City's day as tricky winger Dave Bennett grabbed the winning goal to send the Sky Blues to Wembley for the first time in the club's history.

Their opponents would be FA Cup specialists Tottenham Hotspur and to say Spurs’ confidence was high going into the final would be an understatement. “Seven times we've won the Cup, and number eight is coming up,” was just one of the lines in Chas and Dave's now traditional cup final song: “Hot Shot Tottenham.”

But Coventry’s anthem, “Go for it,” summed up the strong team spirit that was running through the side at the time; if nothing else they would give everything in this, their first Wembley appearance in 104 years.

Just four City players had ever played at the national stadium, with David Phillips being the only current international player in their ranks. On the other hand the Spurs side was littered with international stars and well-known names, while Ray Clemence was playing his 42nd game at Wembley.

Those reading the Saturday papers would probably have believed Coventry had no chance with harsh comparisons in the press between the two sides, though if anything the words probably spurred on the City players to get one over on their more fancied rivals.

In all honesty, despite the harsh predictions, Coventry were flying going into the biggest game in their history. They were unbeaten in seven matches and were improving under the guidance of a managerial pair that the media simply couldn't get enough of.

But despite being a duo the FA, for reasons only known to them, refused permission for the two managers to  out their side on the day meaning that at 2.45pm it was David Pleat and John Sillett who led the way from the tunnel behind the goal and onto the pristine Wembley turf.

Within minutes of the game starting it appeared that Chas & Dave’s’ words had been Nostradamus- like as Chris Waddle beat left-back Greg Downs and send over a cross for Clive Allen to score his 49th goal of the season with a thundering header.

After the worst possible start, Coventry gradually edged their way back into the match, as their fans encouraged their heroes at every opportunity. Their club anthem, “While we Sing Together,” to the tune of the Eton Boating Song, ringing round the famous old stadium.

And just seven minutes after going behind a Keith Houchen flick saw Dave Bennett pounce, sneaking between two Spurs players the  winger rounded RayClemence in the Tottenham goal before calmly scoring the equaliser.

The Sky Blue fans who found themselves scattered all round the ground went mad as did Sillet and Curtis who embraced on the touchline. 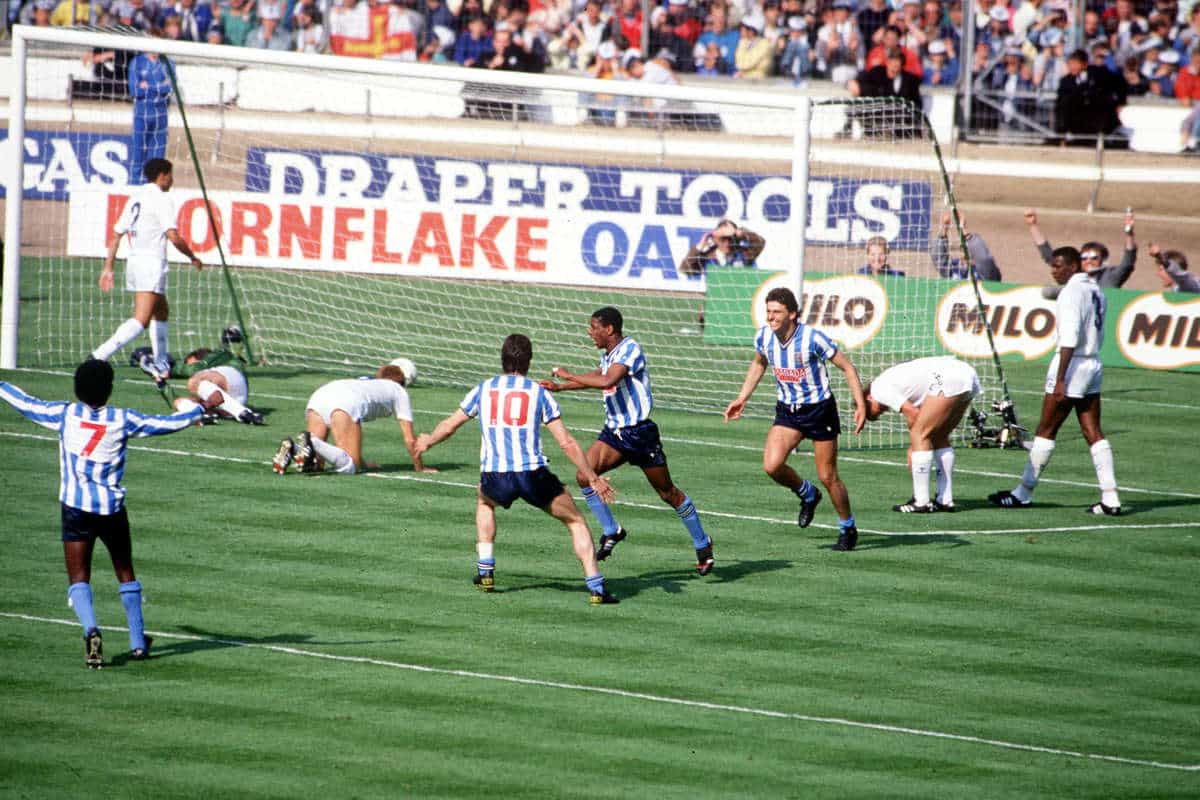 City went close again as Clemence did well to stop  Micky Gynn after good work by Regis while Chris Waddle looked to torment the Coventry defence; but just as it seemed that the game would be even as the massed band of the Royal Marines took to the filed at half time, a  foul on Paul Allen by Nick pickering led to Tottenham's second goal.

Hoddle's free-kick left Ogrizovic groping at thin air with the ball ending up in the net thanks to a combination of Mabbutt and Coventry skipper Kilcline. Officially the goal was given to Mabbutt but nobody in the Spurs side cared, they once again were in the lead and were now strong favourites to lift the cup.

The match carried on where it left off in the second half as Coventry refused to be beaten. Little-by-little they found more space and Bennett finally started to have the impact that had seen him become a true hero of this epic cup run.

Combined with the ever present threat of Gynn, who was constantly causing problems wherever and whenever he could, and the pace and power Regis; Tottenham's centre back partnership of Gough and Mabbutt had a job on their hands.

Coventry’s perseverance eventually paid off on 63 minutes thanks to one of the most iconic cup final goals in the history of the competition. Bennett’s trickery and inch-perfect cross was asking to be finished off and that man again, Keith Houchen obliged, propelling himself at full length to score one of the best diving headers ever seen, not just at Wembley, but anywhere.

The remainder of the game continued at break-neck speed; Houchen went close yet again, while Clive Allen almost bagged number 50 for season. Another 30 minutes would be required, but other than the two sides, there were few complaints.

The volume from the Coventry end grew and grew in extra time as they sensed that they might just have a shot at history by winning the greatest and most famous domestic cup competition in the world at their first attempt.

Deep in his own half Graham Rodger, who had come on as a second half substitute, dropped his shoulder brilliantly before setting Lloyd McGrath free down the right side. Finding a little extra energy from somewhere the midfielder sent in a cross that struck the luckless Mabbutt's knee and looped agonisingly over a rooted Ray Clemence.

Tottenham were devastated, they had given it everything in an effort to win the FA Cup for a record time, but hadcome up short against a side that few people had fancied.

In the dying stages Coventry almost sealed things when the brilliant Gynn missed when it was easier to score; but it mattered not, minutes later referee Neil Midgley put his whistle to his lips and put the thousands in sky blue, not to mention those on the pitch, out of their misery.

Coventry skipper Brian Kilcline had been taken off in the second half with cramp, yet still mustered the energy to hop up the famous old 39 steps to collect the trophy, turning and thrusting it jubilantly in the direction of the thousands of City fans at the far end.

“One of the most stirring performances in the history of the FA Cup,” is how James Lawton described the occasion in the Express the following day, a sentiment which nobody who witnessed it could disagree with.