Luciano Spalletti has overseen a remarkably quick transformation since his appointment as the Inter's head coach in the summer. After a shambolic few years that saw the likes of Roberto Mancini, Frank de Boer and Stefano Pioli come and go, he looks set to provide the stability that has been missing.

His side are a solid outfit, though their attacking productivity is based primarily on the clinical finishing of Mauro Icardi. The true foundations of their success this season lie in defence, where Milan Škriniar has emerged as one of the best young players in Europe in his position.

So good has the Slovakian centre-back been at the heart of Spalletti’s back four that La Liga leaders Barcelona were reported to have shown interest in him in later 2017.

However, he is concentrating only on the task at hand. “I am not interested in Barcelona,” he told Mediaset Premium. “I play for Inter and my objective is to play for Inter. I want to get them to win.”

We’ve taken a look at Škriniar’s background, strengths, weaknesses and statistics to assess why he is now among the most coveted young central defenders in the world.

Škriniar joined Zilina, one of Slovakia’s most successful clubs, in 2007. He was just 12 years old and had never before played outside of his hometown of Žiar nad Hronom, but he took quickly to his new environment.

Igor Chodelka and Tibor Goljan, his coaches at under-13 and under-17 level respectively, were complimentary about the player’s mental and technical attributes as a youngster in interviews with ESPN FC. “Milan was a particularly talented and smart kid for his age,” said Chodelka. “He worked patiently on his ball skills, heading and shooting.” Goljan added that: “He (Škriniar) has always been the leader on and off the pitch.”

Evidently, Škriniar matured at a fast rate, which explains why he made his debut for Zilina’s first-team at the age of just 17. And, after a loan spell and four more years of acclimation, he left Slovakia for Italian football, joining Sampdoria for £900,000 in January 2016.

After a quiet six months that saw him make his senior international debut while he spent his time at club level on the fringes of the first-team, he excelled in 2016/17 under the auspices of Marco Giampolo.

Sampdoria have, during Giampaolo’s reign, developed some outstanding young talent. Some, such as defensive midfielder Lucas Torreira, who we profiled in this recent post, Karol Linetty and Dennis Praet remain today. Others, such as Bruno Fernandes (Sporting Lisbon) and Patrik Schick (Roma) have moved on to bigger things.

Škriniar joined the latter two when swapping Genoa for Milan in the summer, signing for Inter for a fee of around £20million. It was a substantial amount to pay for a relatively inexperienced young defender, but the Nerazzurri have been immediately repaid in good performances.

WHAT ARE ŠKRINIAR’S STRENGTHS AND WEAKNESSES?

One of Škriniar’s most obvious strengths is, well, his strength. Physically, he appears to be your conventional centre-back, standing tall at 6ft 2ins, while he is also a forceful tackler, strong in the air and combative on the ground.

However, one underrated aspect of his game that has come to the fore in recent months – and has no doubt led to the Barcelona rumours – is his ability on the ball.

Central defenders playing for Giampaolo must be astute in possession; there is no other way. The Sampdoria boss wants his teams to build from the back and the centre-backs are integral to this process. Thus, for Škriniar to achieve anything during his time with the Blucerchiati, he had to demonstrate quality with the ball at feet.

He essentially got his chance when Leandro Castan’s loan move was terminated before last season had even begun – the Brazilian ended up at Torino, and Škriniar partnered Matias Silvestre at the heart of the back four. He proved he was comfortable on the ball, as well as playing within a high defensive line, to earn the move to Inter.

Under Spalletti, Škriniar has continued to exude calm in possession. A prime example of this is seen in the below graphic. Receiving from his goalkeeper, he comes under pressure from three opposition players. However, rather than panicking, kicking the ball out of play or hoofing long at the first attempt, he controls the ball well, works some space for himself and picks out a team-mate out of shot. 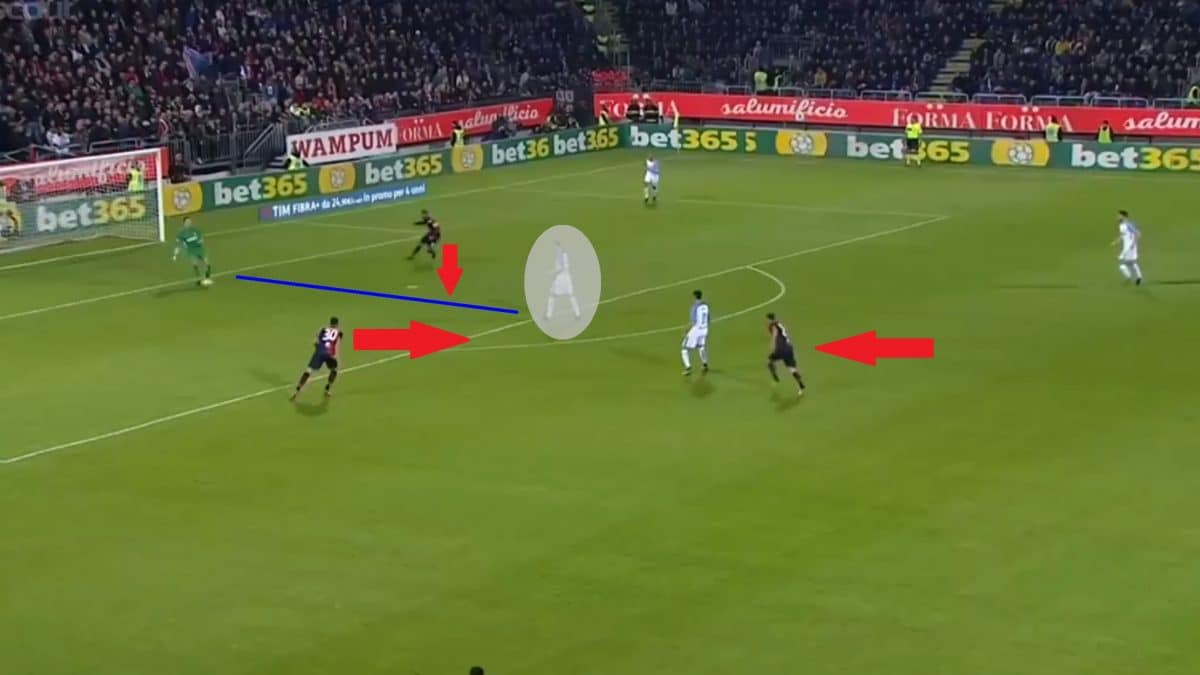 Resistant to pressure and intelligent in his decision-making, the Slovakian is also an accurate ball-player. Only two defenders in the entirety of Serie A have higher pass success percentages than his 91.5 per cent – Juventus' Andrea Barzagli and Lazio’s Stefan de Vrij. Furthermore, only eight play more passes per 90 minutes than his 50.79.

There are no obvious signs of weakness in Škriniar. He reads the game extremely well and knows when it is appropriate to cover his defensive team-mates, is an aggressive defender capable of playing at various depths, is surprisingly quick considering his build, and is a composed and efficient passer.

In the summer of 2017 Škriniar was linked with a move to West Bromwich Albion, who were at the time flying high in the Premier League under Tony Pulis. However, since his successful move to Inter, any chance of him joining a mid-table is completely out of the question.

Financially and in terms of prestige, the only club outside of England’s established top six who could even contend to sign the player is Everton. However, given their recent troubles, even they would find it difficult to convince the 22-year-old to leave Milan.

Their neighbours Liverpool have needed an assured centre-back for quite some time, and Škriniar would fit the bill. Likewise, Manchester United could do with a ball-playing defender to aid their possession game, while Arsenal must now be on the hunt for a long-term Laurent Koscielny replacement.

Pep Guardiola’s Manchester City would be wise to look into the player’s availability too, given the way they play. Considering the youngster has been able to adapt so quickly to life at Sampdoria and Inter, operating effectively within two systems that involve playing out from the back, he would be well prepared for a move to the Etihad.

Škriniar has gone from unheralded reserve to Serie A star in under 18 months. His stock has risen greatly in a short space of time, and it shows no sign of tailing off now. At a point in football history when the role of the centre-back increasingly means doing more than defending, he is perfectly placed to become a superstar.