Harry Kane isn't the only record breaker at Tottenham Hotspur this season. With his goal against Everton, Heung-Min Son became only the second player in the club's history to score in five consecutive home Premier League matches. It's something only Jermain Defoe has managed before him.

It's an impressive achievement when you consider Teddy Sheringham, Dimitar Berbatov, Robbie Keane and Gareth Bale have all been prolific scorers for the club but never managed it. Even Kane, the club's all-time leading goalscorer in the Premier League, hasn't done it – yet.

Son, at times, gets lost in the hype surrounding Kane, Dele Alli and Christian Eriksen. All three have been linked with big money moves with Manchester United, Real Madrid and Barcelona reportedly interested.

Son is the perfect support act for the trio. He's the most unique player Mauricio Pochettino has at his disposal and arguably one of the most underrated players in the Premier League.

There aren't many players in the world who can deputise for Kane, Alli and Eriksen, but Son manages to do it effectively whenever he's called upon. He's like a skeleton key for the Spurs boss, able to unlock any door; leading the line, supporting the striker or playing in wide areas.

Injuries have given the South Korean attacker what feels like more of a sustained run in the starting XI this season. We're still in January yet he's just five starts short of his total for 2016/17.

The extended run in the first-team has seen him add consistency to his game, not that he ever lacked it to begin with. He's just been able to find his rhythm a lot quicker this time around. 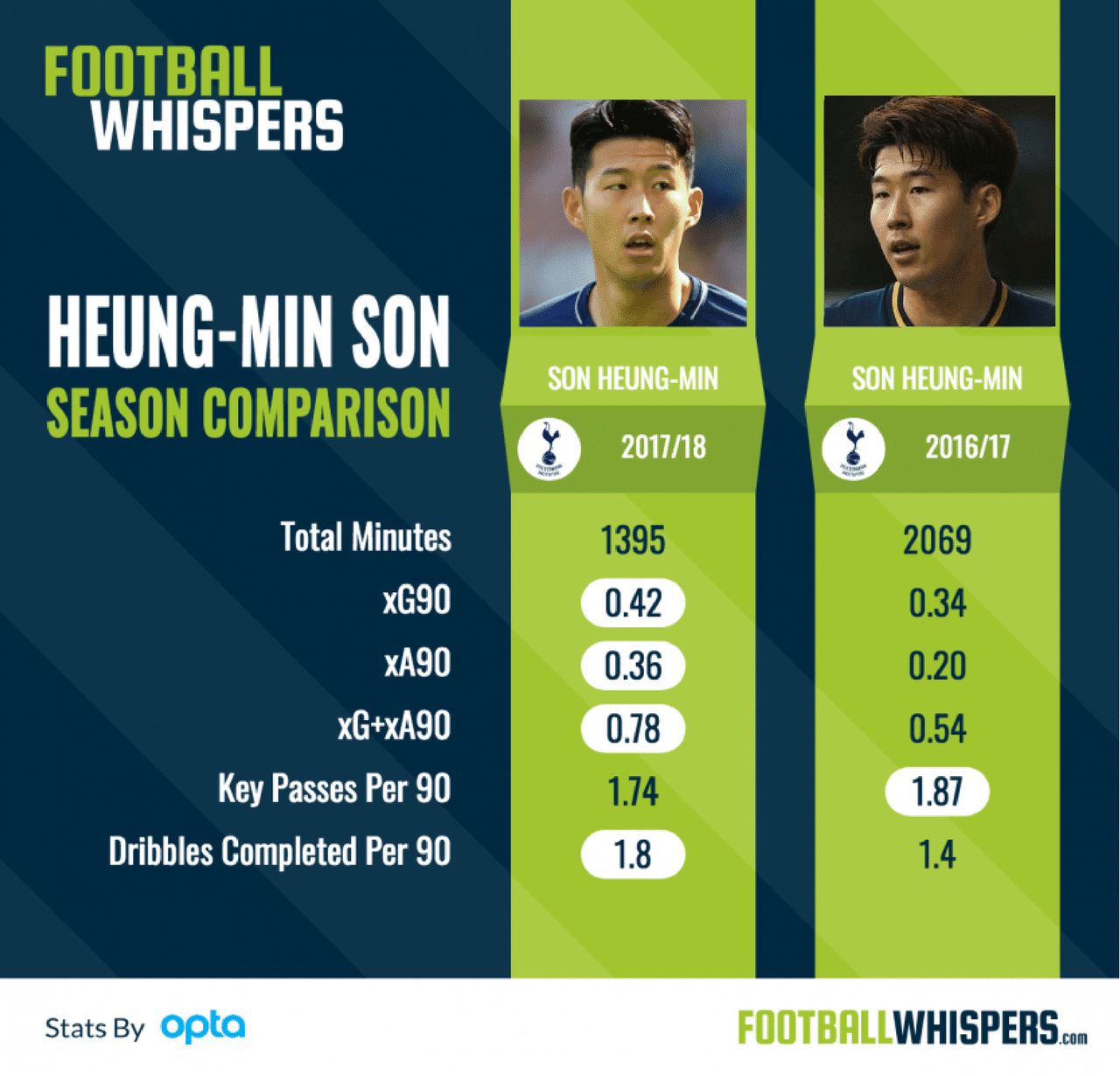 This is evident in the graphic above comparing Son's stats for the last two seasons. This term, in which Alli has taken on a more creative role, Son's expected goals per 90 (xG90) has increased by 0.08. His expected assists per 90 (xA90) is up by 0.16 meaning his xG+xA90 is up by 0.24. It's a substantial increase.

Son is getting into higher scoring areas on a regular basis and he's creating better chances for his team-mates.

What's interesting, however, is that Son regularly outperforms his xG. In other words, he scores low quality chances. Last season his xG for the entire season was 7.77 yet he finished the campaign with 14 strikes in the league. This season his xG currently stands at 6.52 yet he's scored eight.

While in isolation it doesn't mean much, Spurs know they have a player who regularly gets into good positions but can score low value chances, too. It's no small sample size: in more than 3,300 minutes of Premier League action he's ‘outperformed' his xG by over eight goals.

There was a lot of talk during the summer months that Spurs needed to bring in a player to help ease their over-reliance on Kane. Son isn't identical to the Spurs No.10 in terms of style but he's a goal threat all the same.

Alli might not be reaching the goalscoring heights of the last two seasons but Pochettino's men are the third-highest scorers in the league. Kane is, rightly, getting a lot of the attention for his exploits but as a second supply of goals Son is holding up his end of the bargain and that shouldn't go unnoticed.

Only three teams in the league have two or more players with eight or more goals; Manchester City, Liverpool and Spurs.

How Son compares to others

Alexis Sánchez is at the centre of a tug-of-war between José Mourinho and Pep Guardiola while Eden Hazard is reportedly a Real Madrid transfer target to replace Cristiano Ronaldo. Yet Son's xG90 for the season is higher than the latter's and not far off the Chilean's this season. 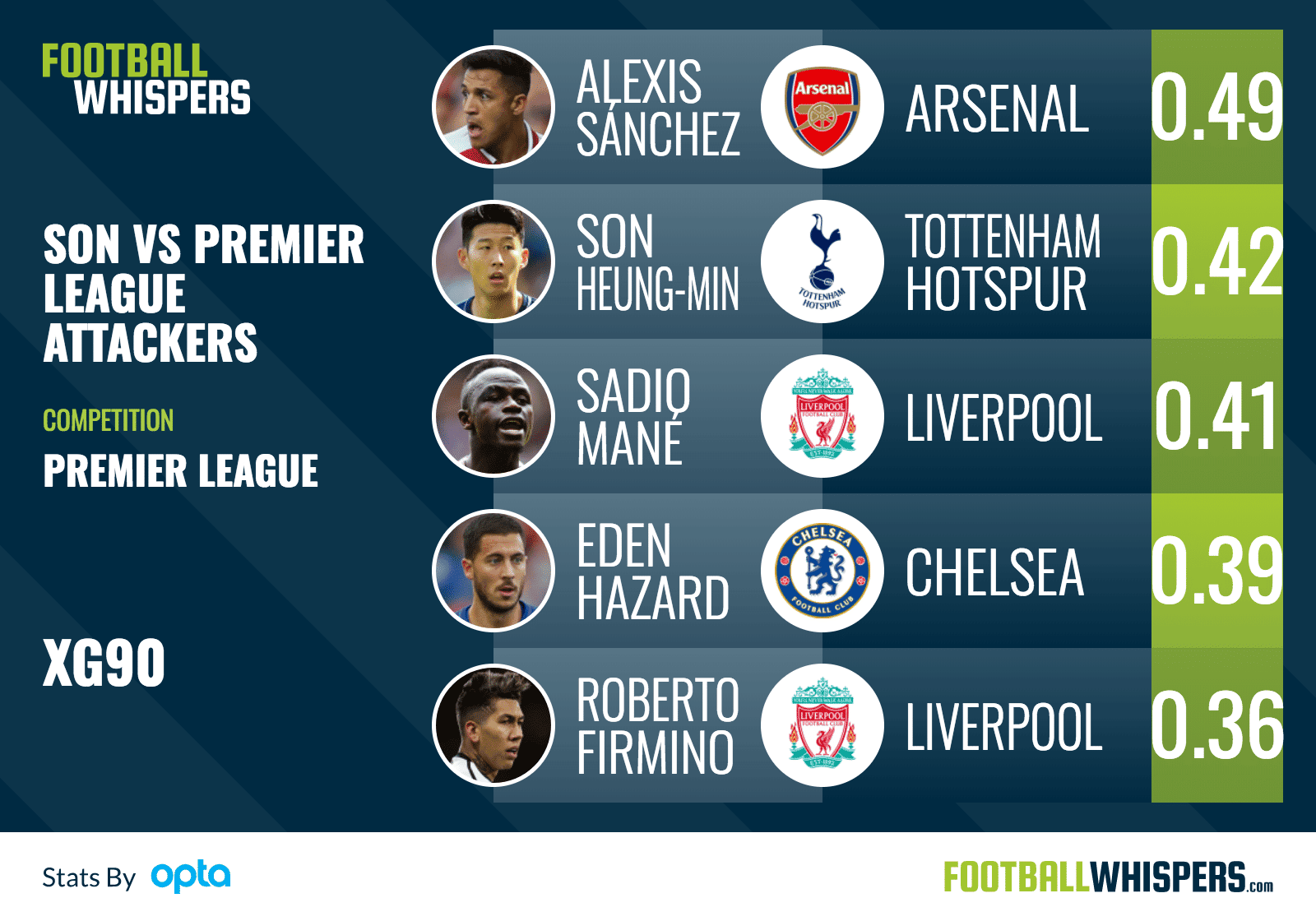 Furthermore, Son has scored more goals than both players this season and has more assists. Sánchez has played over 100 more minutes than Son while Hazard has featured in 1,257 minutes of Premier League football.

The former Bayer Leverkusen attacker is averaging a goal every 116 minutes this term and at his current rate is on course to finish the season with more than 20 goal involvements.

Son might not get the same amount of attention as his team-mate but he's vital to the way Pochettino sets his side up. He's the reason Alli has been allowed to turn into more of a creator and why the lack of a back-up striker isn't an issue like it would be for others. He's worth his weight in gold. Spurs should really think about extending his deal which currently expires in 2020. His form won't go unnoticed for long.