The month of March heralds two key events in the British calendar; the start of spring and the quarter finals of the FA Cup as the competition, which starts in the bleak mid-winter is, by now, played-out under watery sunshine by players, the majority of which are glove-free.

The famous old tournament often throws up some of the most competitive and memorable encounters at this stage of proceedings too, as the eight remaining participants can rightfully claim that they have made it this far based on merit alone.

But that doesn’t mean things are any more predictable and any top flight teams who find themselves facing sides from the lower leagues underestimate their opponents at their peril, as some of these classic encounters prove.

So without any further ado, here are some of the most memorable FA Cup quarter final clashes from years gone by. 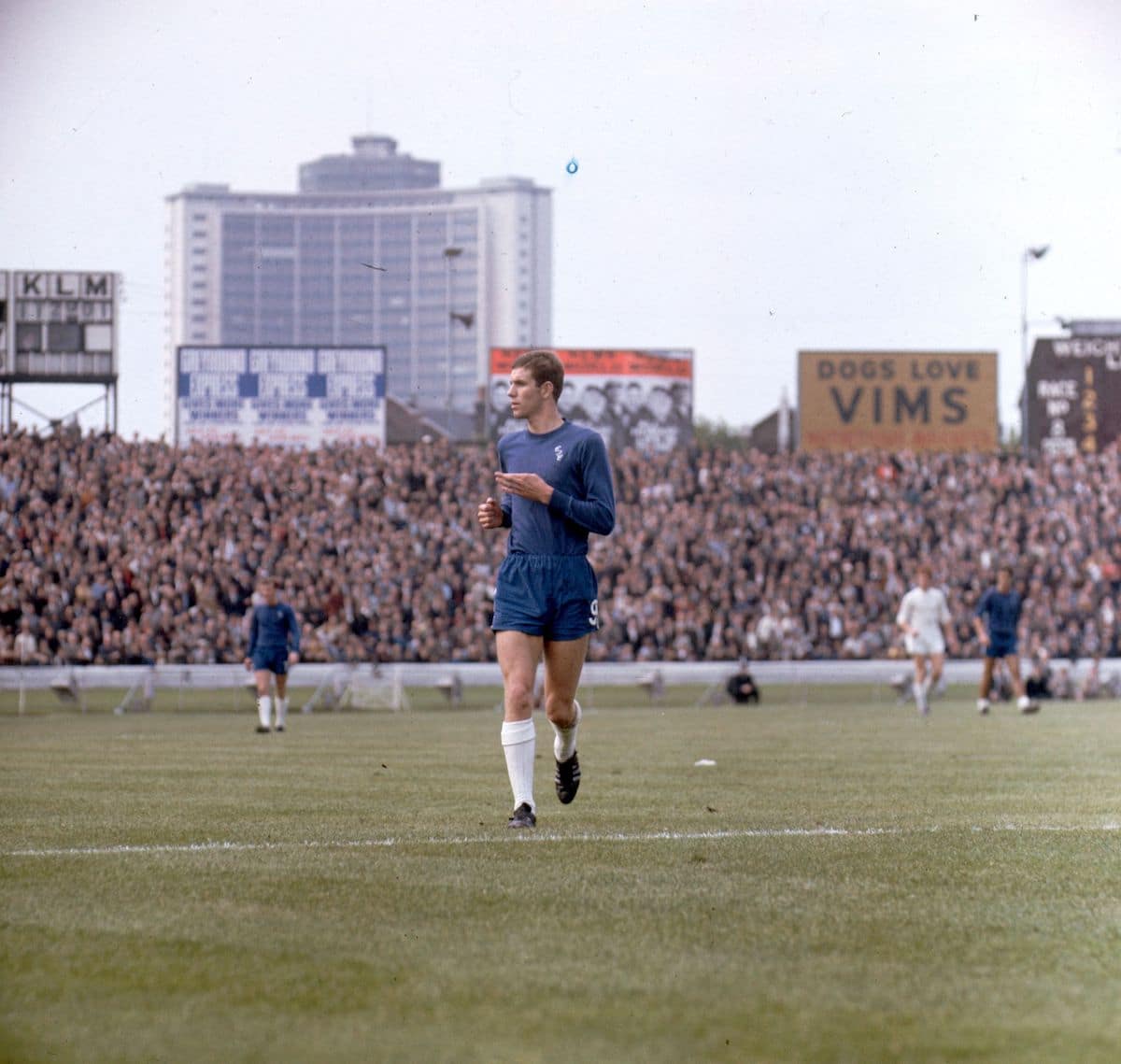 On the way to Wembley in 1970 Chelsea were involved in a real thriller against Queens Park Rangers on a pudding of a pitch at Loftus Road in February of that year.

During that cup run they scored goals for fun, 25 in fact, with Peter Osgood finding the net in every round – with that in mind it's no surprise that this turned out to be something of a goal fest.

David Webb, the man who would ultimately score the winner in the final against Leeds United, got the first for the Blues that day, volleying home from close range after some nice work on the right from John Hollins.

Peter Osgood made it 2-0 soon after as Chelsea looked to be running away with the tie only for Terry Venables to pull one back for Rangers from the penalty spot.

It was 3-1 before half-time, though, when Osgood got his second of the game. But that wasn’t the end of the scoring in this epic encounter.

“Ossie” made it four when he completed his hat-trick before Barry Bridges pulled another back for Rangers, but it turned out to be nothing but a consolation strike as Chelsea marched on towards cup glory. 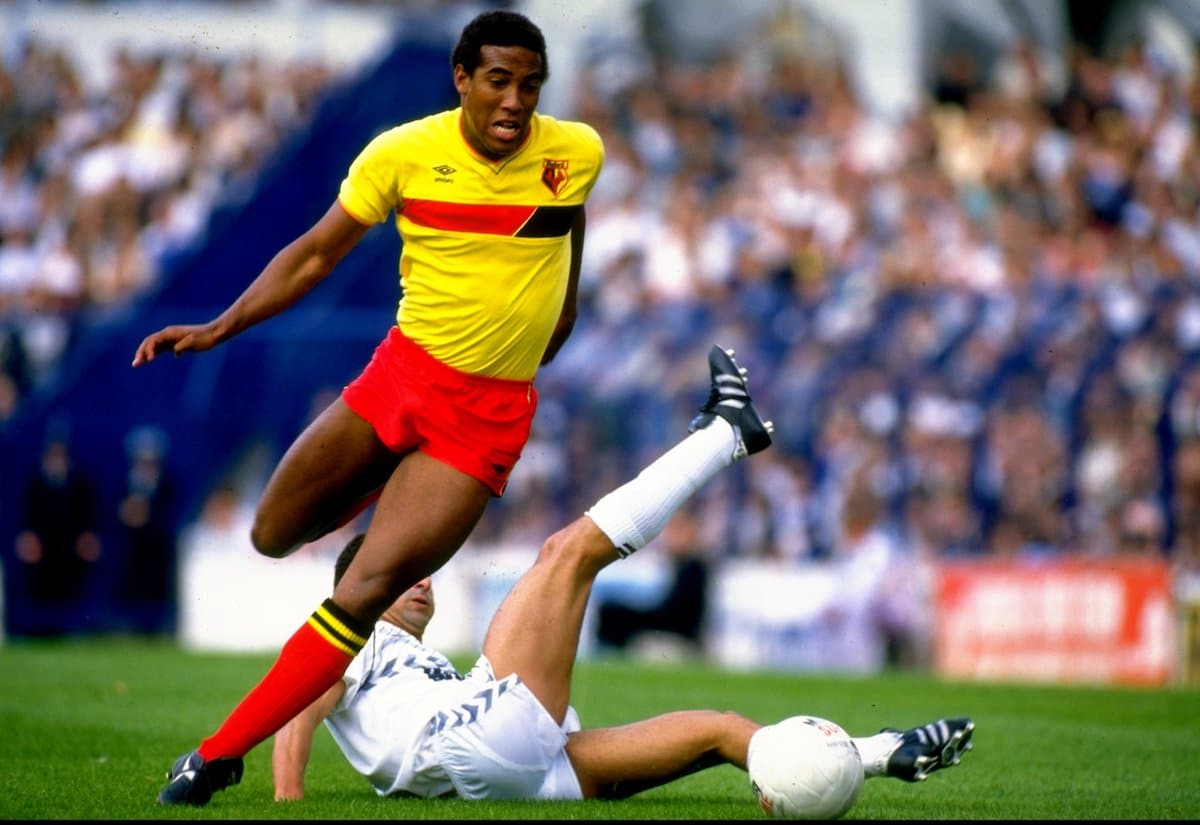 READ MORE: WHICH ARSENAL PLAYER COULD MOVE TO REAL MADRID?

Graham Taylor had taken Watford from the Fourth Division to the First in four years in the early 1980s and in 1984 they had reached their first FA Cup final when they lost to Everton.

But just three years later they looked to repeat that feat when shocked Arsenal with a 3-1 quarter final win at Highbury.

The Hornets should have taken an early lead when Luther Blissett squandered a great chance, a miss that  looked like it could be costly when Ian Allinson gave the Gunners the lead after confusion in the Watford defence.

But atoning for his earlier error Blissett then volleyed home from close range to equalise after some good work down the right from David Bardsley and it was that man Bardsley again with some nice trickery that led to Watford's and Blissett’s second thanks to a towering header in the second half.

Arsenal laid siege to the Hornets' goal as they went in search of an equaliser and it was while being camped in the Watford box that the Hornets were presented with the chance to seal an unlikely victory.

Niall Quinn appeared to be impeded when he jumped for a high ball in the box and even the linesman clearly flagged for a foul and what would have been a penalty. But the referee ignored his assistant, and the protests of the Arsenal players and played on, only for Blissett to sprint the length of the field to score Watford’s third.

Arsenal surrounded referee Brian Stephens but the decision stood and it was the men from Vicarage Road who went through to the semi-final at Villa Park to play Tottenham Hotspur – losing heavily – and not Arsenal. 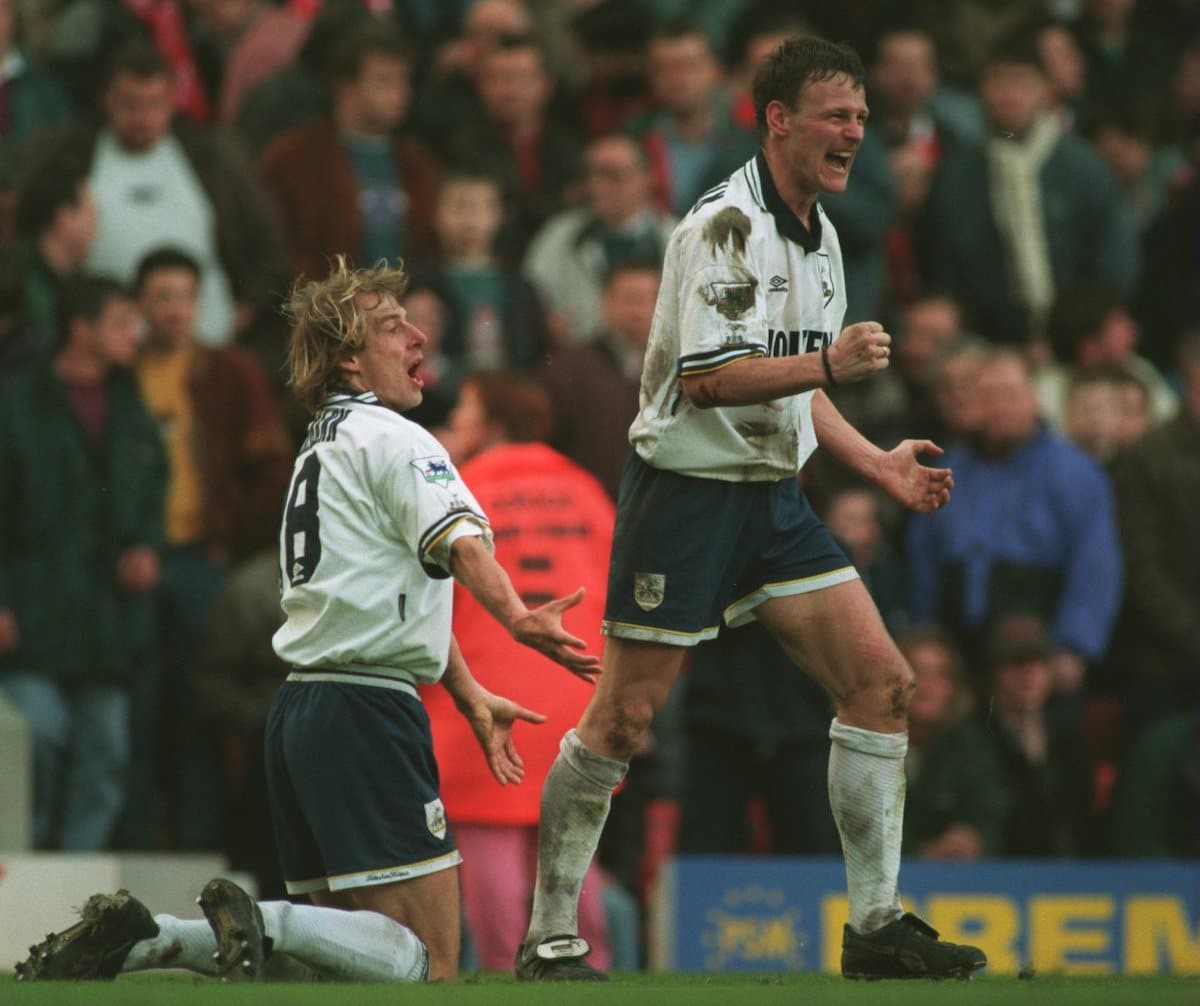 The 1994/95 season had promised much for both clubs. Liverpool looked to be getting back on track under Roy Evans while Tottenham – thanks to Teddy Sheringham, Jurgen Klinsmann, Nick Barmby and Darren Anderton  – were looking to offer more of a threat under new manager Gerry Francis after the departure of Ossie Ardiles.

Ten days earlier Spurs had won a thrilling Fifth Round replay 6-2 at Southampton after a stunning comeback, but it looked like their run was coming to an end when Robbie Fowler gave Liverpool the lead as half time approached.

But just before the interval Teddy Sheringham equalised with a magnificent curling effort from 20 yards to the delight of the 5,000 or so travelling fans.

Spurs dominated in the second half and, with 90 seconds to go, Sheringham’s clever flick found Klinsmann who surged into the box and guidedthe ball past David James for the winner and set-up a semi-final which they would eventually lose to that year's cup winners Everton. 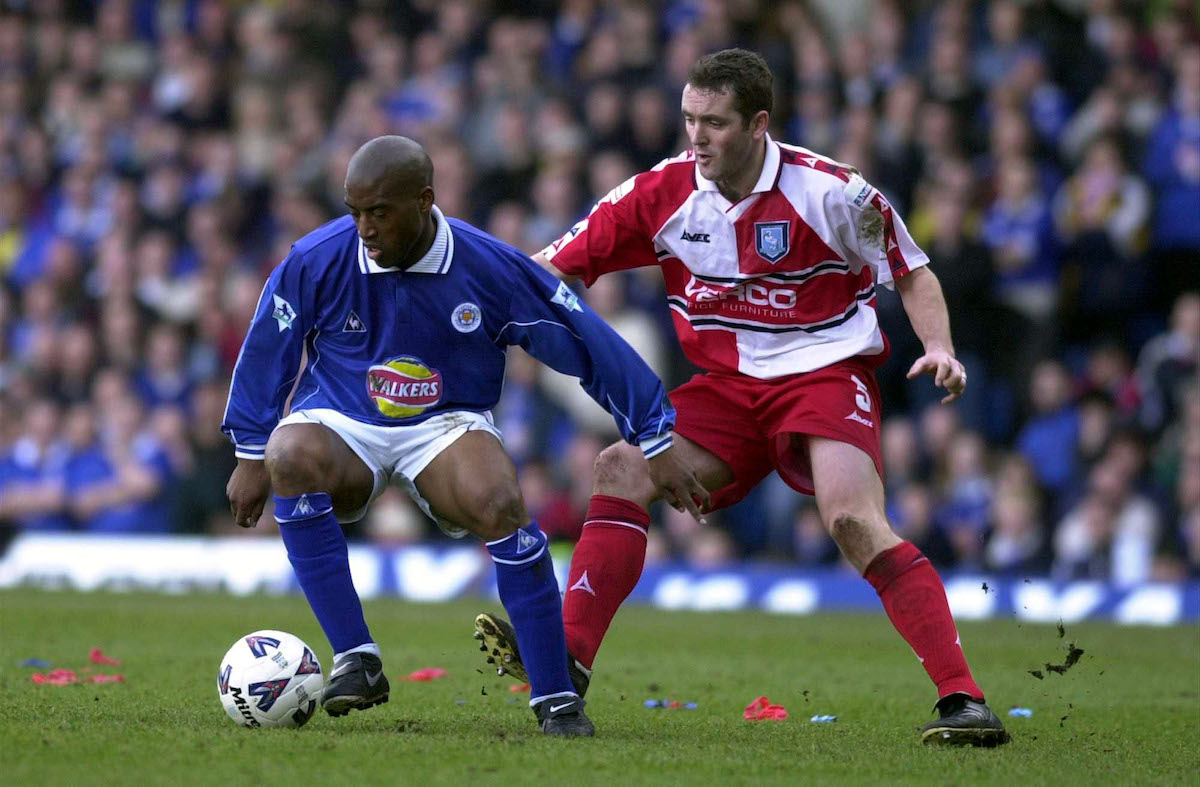 Ten days before Wycombe’s historic FA Cup Sixth Round tie with Leicester City several of their first team were out injured forcing manager Lawrie Sanchez to advertise in the press for strikers who might be interested in having a trial.

A certain Roy Essandoh replied and a week and a half later he was leading the line for Wycombe away to a Premier League club in an FA Cup quarter-final in the most incredible of cup stories.

With just four minutes on the clock it was unfancied Wycombe who took the lead when Steve Brown curled over a free kick and Paul McCarthy headed the ball past the Leicester ‘keeper Simon Royce.

The lead lasted until just after the hour, though, only for Darren Eadie's cross from the left to be touched in by Muzzy Izzet.

With only 10 minutes to play Wanderers boss Lawrie Sanchez was from the bench for running the length of the pitch to argue with the referee after Steve Brown’s cross appeared to strike the arm of the Leicester defender Stefan Oakes and no penalty was given.

But there was to be a final twist. Deep into injury time Jamie Bates headed across the six yard box for the newly recruited Essandoh to head home. Astonishingly Wycombe Wanderers, and their part-time striker, were in the semi-finals of the FA Cup where they would face the mighty Liverpool. 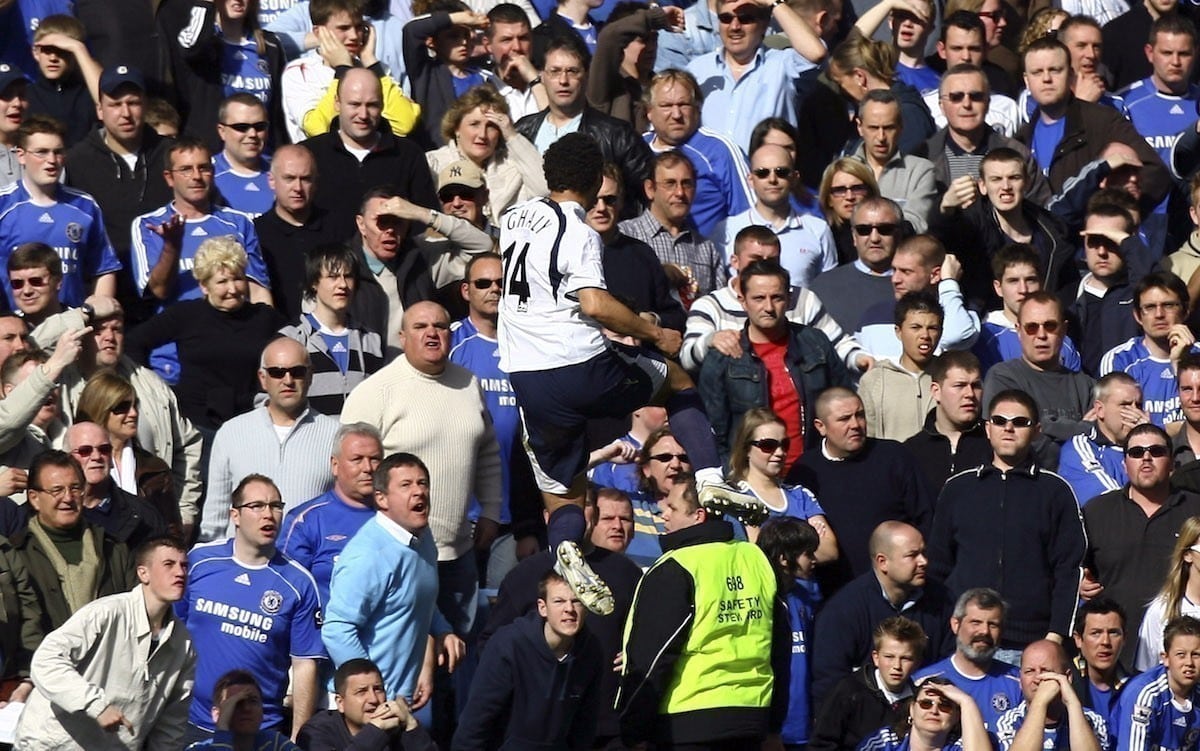 This London derby had pretty much everything as two of the bitterest rivals in the capital faced each other in a gripping quarter final encounter.

In true Jose Mourinho style the Chelsea manager spent most of the build-up saying how he didn’t want a replay. But a draw turned out to be a great result after the Blues found themselves staring defeat in the face  at half time.

Goals from Dimitar Berbatov and Hossam Ghaly either side of a Michael Essien own goal saw Mourinho's team 3-1 down at the break and the likelihood of a replay being nothing more than a feint hope.

But with Ricardo Carvalho and Khalid Boulahrouz the only recognised Blues defenders on the field, Frank Lampard added to his first-half strike in the 71st minute before Salomon Kalou, who had come on for Ashley Cole, completed the most unlikely of comebacks.

The momentum was still with the Blues going into the replay – which, of course, their manager had gratefully accepted – running-out 2-1 winners at White Hart Lane before going on to beat Manchester United in the final. 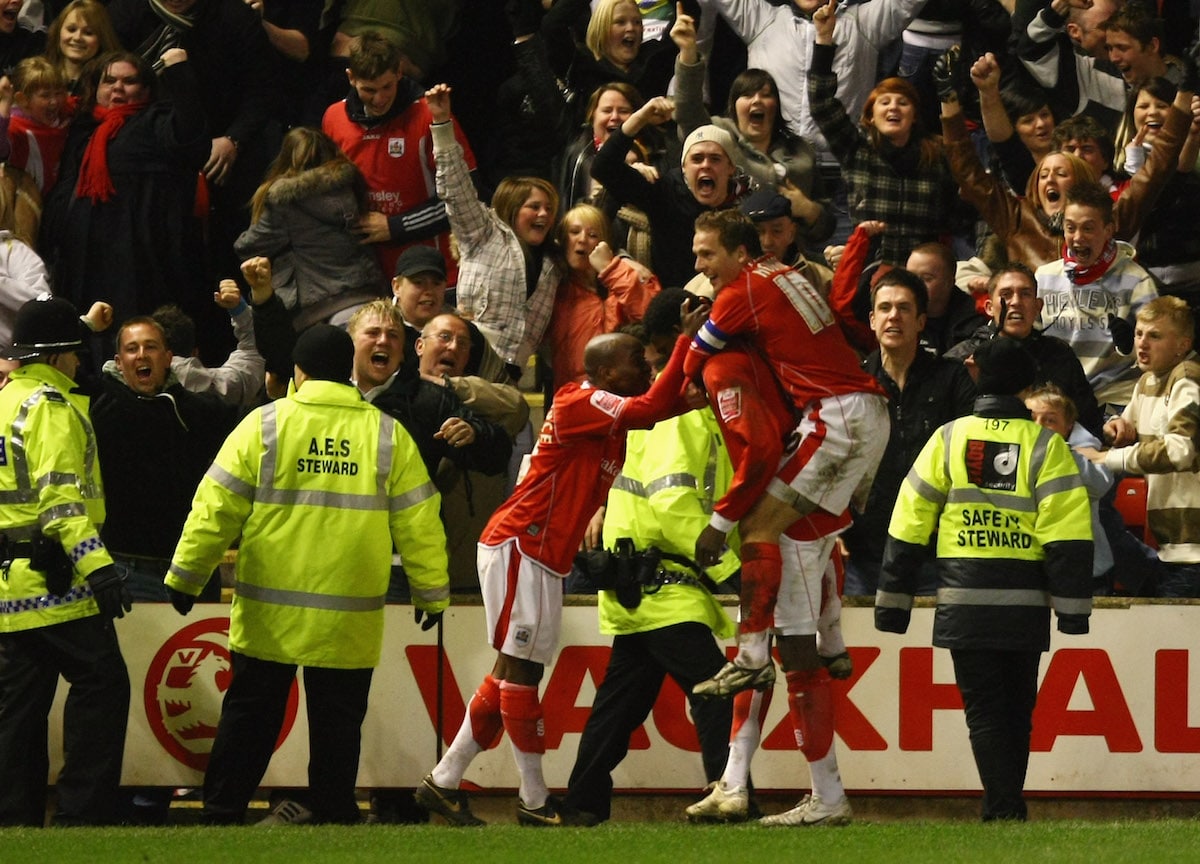 FA Cup holders Chelsea appeared to have been handed an easy path to the semi-finals of the cup when they faced Barnsley, from the Championship, who were still on cloud nine after defeating Liverpool at Anfield.

But the giant-killers weren't done yet as they looked to take a second Premier League scalp in the space of a month in front of a full house in South Yorkshire.

In fact, the Tykes could have been a couple of goals up by half-time and many thought their chance might have passed them by. But on 66 minutes Kayode Odejayi, who had arrived from Cheltenham Town, jumped with Chelsea goalkeeper Carlo Cudicini and headed Martin Devaney’s right-wing centre into the net.

Chelsea treid just about everything in their efforts to find what most people thought would be the inevitable equaliser, but the goal never came and Barnsley held on for a memorable victory which would see them travel to Wembley where they would eventually fall to Stoke City in the semi-final.