Both Sirius and Goteborg sit in the bottom half of the Allsvenskan table as things stand but a win this weekend could thrust either side into or around the top six and really give their season the kick-start it clearly needs.

With ten games played both Sirius and Goteborg have 14pts on the board this season and we're backing the two sides to cancel one another on Monday night. Four of the pair's last five competitive encounters have ended in draws, while two of Sirius' last three games have also ended in stalemates. With both teams so evenly matched in all departments, the most likely result between the pair is surely a draw.

We're hoping to be treated to goals from both sides this Monday as that has been the way four of their last five competitive head-to-heads have finished, and each of those have ended in draws. Both teams have also scored in each of Sirius' last three matches in all competitions while three of Goteborg's last five games have produced goals at both ends of the pitch, adding further weight to our second prediction for Monday's match-up.

The latest stats for Sirius vs Goteborg

A close and competitive 90-minutes expected at the Studenternas IP

Sirius will still be in shock after they came out on the wrong end of a 4-3 scoreline against table-topping Hacken before the international break. The hosts took a 2-0 lead in the opening 18-minutes but Bjarnason pulled a goal back for Sirius before the break. Hacken had their goalkeeper sent-off 10-minutes into the second half and an own goal from Tebo Uchenna in the 77th-minute got Sirius back onto level terms. Despite having a one-man advantage, Sirius fell behind again 4-minutes from time but deep into stoppage-time Kouakou looked to have rescued a point for the visitors when he made it 3-3. However, in the 96th-minute, Hacken created one final goalscoring opportunity and the 10 men took it to win the game 4-3.

Goteborg left it late against Sundsvall last time out but did enough in the end to secure all 3pts. The first half ended goalless and the game continued that way until the 87th-minute when Goteborg's veteran forward, Berg, fired home to make it 1-0. The very same player was on hand in the final minute of the game to make sure of the points with a second goal, making the final scoreline 2-0 to Goteborg.

Sirius: August Ahlin and Patrick Nwadike look set to miss out this weekend due to injury.

Goteborg: Sebastian Eriksson is the main injury concern for the visitors. 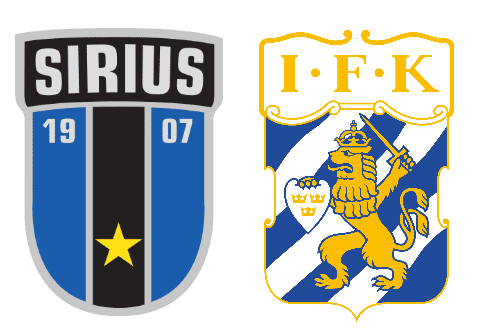