Sirius will be hoping to secure the result that takes them into the top half of the table this weekend when they play host to struggling Degerfors. The visitors are yet to hit the double figures mark this season, securing just 8pts from their opening 13 matches, so an away win on Sunday looks unlikely.

We're backing Sirius to win on Sunday just as they have done in four of their last five competitive games against Degerfors. Sirius haven't been in the best of form of late but did recently win 1-0 away at Norrkoping and have only lost two of their last six fixtures. Degerfors are without a win in their last five matches, losing three times and drawing twice, so you can see why we're backing Sirius to do just enough to win on Sunday.

Both teams scored when these two sides last locked horns and on that occasion, Sirius claimed a 2-1 away win. Five of Sirius' and four of Degerfors' last six competitive and non-competitive fixtures have ended with both teams getting on the scoreboard, so you can see why we're not backing either side to keep their clean sheet intact this weekend.

Top Betting Odds and Stats for Sirius vs Degerfors

Degerfors hoping to move out of the relegation zone

Sirius were away last weekend at the Guldfageln Arena facing Kalmar and took the lead against their hosts in the 12th-minute through Larson. The visitors couldn't maintain their lead into the halftime break as Olafsson equalised for Kalmar in the 34th-minute. The second half proved even tighter than the first and with neither side able to carve out another goal, the game ended in a 1-1 draw.

Degerfors were looking to secure a much-needed home win when they took on Norrkoping last weekend. Norrkoping took an early lead through Agardius and lead 1-0 at the interval. as time ticked away, it looked like Norrkoping were going to secure all 3pts. However, deep into stoppage-time, Salmon rose to force the ball home and rescue a point for the home side.

Sirius: Moustafa Zeidan, August Ahlin and Patrick Nwadike could all miss out for the hosts this weekend.

Degerfors: Elliot Kack looks set to miss out once again this weekend due to a knee injury.

Questions about Sirius vs Degerfors 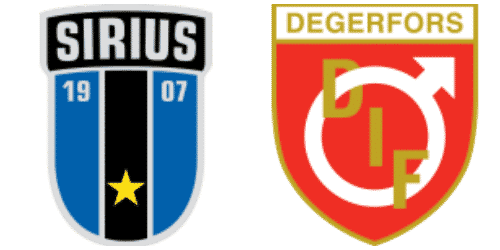