Sint-Truiden take on Union Saint-Gilloise in the First Division A opener on Saturday, July 23rd. Last season’s surprise package Union start the new campaign at Sint-Truiden. Read our free predictions and find the latest odds for the fixture below in our detailed match preview.

Can Sint-Truiden upset the odds when they face Union Saint-Gilloise on the opening weekend of the new Belgian season? Read our top predictions for this weekend’s fixture below.

Union Saint-Gilloise finished top of the pile in the regular part of the First Division A campaign last term, though somewhat unsurprisingly, their team has been cherry-picked by more predatory clubs over the summer. Sint-Truiden actually beat Union 1-0 when the teams last met and the Saint-Gilloise player that put them to the sword in the meeting before that, Deniz Undav, has moved on to Brighton, while successful boss Felice Mazzù has joined Anderlecht. This could be a chance for the hosts to catch last year’s highfliers cold at the start of their new ear and we think Sint-Truiden are under-priced in the double chance market.

Sint-Truiden are consistent goal-getters on home soil and they have failed to score only once in 14 First Division A assignments at the Stadion Stayen. The hosts look ready to prolong that record on Saturday, though they are likely to trade blows with a Union Saint-Gilloise side that plundered more goals than any other team in the league last season. The factors here suggest that backing both teams to score on Saturday would be a smart manoeuvre.

View our list of the best stats for Saturday’s game below alongside a tool to help you choose the best odds.

Read all of the injury updates and team news for Saturday’s First Division A meeting between Sint-Truiden and Union Saint-Gilloise below.

Sint-Truiden lost promising defender Liberato Cacace to Italian club Empoli over the summer, while their incoming business has been limited to free transfers thus far. Fabinho looks like an interesting capture from Benfica as does Eric Junior Bocat from Mouscron.

Union Saint-Gilloise sold Casper Nielsen to Club Brugge during the summer window, while Damien Marq and Jonas Bager moved to Charleroi. Deniz Undav and Kacper Kozlowski have jumped ship to Brighton in the Premier League. Karel Geraerts is the new Head Coach in the hotseat. 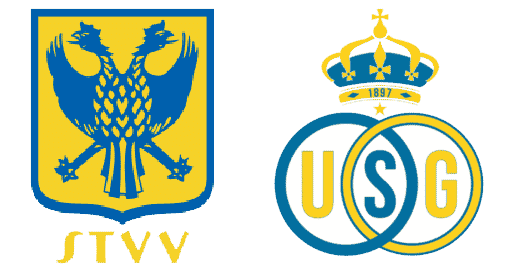 The bookies have priced Union Saint-Gilloise as their favourites to prevail.

Karel Geraerts is in charge at Union Saint-Gilloise having joined the club over the summer.