It's been a thrilling spectacle of a season for Manchester City so far. Pep Guardiola‘s side are 12 points clear of rivals Manchester United with the title looking all but sewn up already.

They have hammered Liverpool, beaten much-lauded Serie A leaders Napoli home and away and edged Chelsea at Stamford Bridge and broken the Premier League record for consecutive wins.

Although they would have been disappointed to lose their unbeaten record to Liverpool at Anfield, it has been a season full of positives.

While they have the best squad in the league, they arguably wouldn't be where they are now without David Silva.

The Spaniard, 32 today, is now in his eighth season at the Etihad.

Like a fine wine, he seems to get better with age and has been producing some of his finest form under Guardiola of late, acting as the cultured puppet-master in a team packed with speed and attacking intuition.

To celebrate the midfielder's rich vein of form, we've delved into the stats to see how he compares to the Premier League's other distinguished craftsmen.

Silva has 112 assists since joining City from Valencia in 2010. His biggest haul in a single season was the 17 he managed when City won the league in the 2011/12 campaign. Since then, he has been consistently productive, averaging about ten a term.

Recently, he has been as effective as ever, creating 11 goals for his teammates already this season, eight in the Premier League and two in the Champions League and one in the FA Cup.

With eight league assists, he has already bettered his total for the whole of last season and, at the current rate, he is on course for reaching close to 20.

He is currently averaging 88.7 per cent passing accuracy, which is higher than his 86.2 per cent career average, illustrating that his use of the ball remains as sharp and astute as ever. He may be the wrong side of 30 now, but Silva is maturing like a fine wine. He is as rounded and intelligent as a midfielder gets and, despite flying under the radar somewhat thanks to the outstanding form of De Bruyne, he remains an essential cog in the Guardiola City machine.

This was evident during the win over Arsenal at the start of November. Although De Bruyne enjoyed another fine afternoon, scoring an excellent opener, Silva was named as Sky Sports‘ man of the match. The reason? He was everywhere.

Silva had 98 touches against the Gunners – the joint-most with Fabian Delph, interestingly – as he dictated the tempo of the game in a three-man midfield alongside De Bruyne and Fernandinho.

With Sterling, Leroy Sané and Agüero in attack, the Spain international was never short of options when he had the ball at his feet, as the City attack made intelligently angled runs behind the Arsenal back-line. 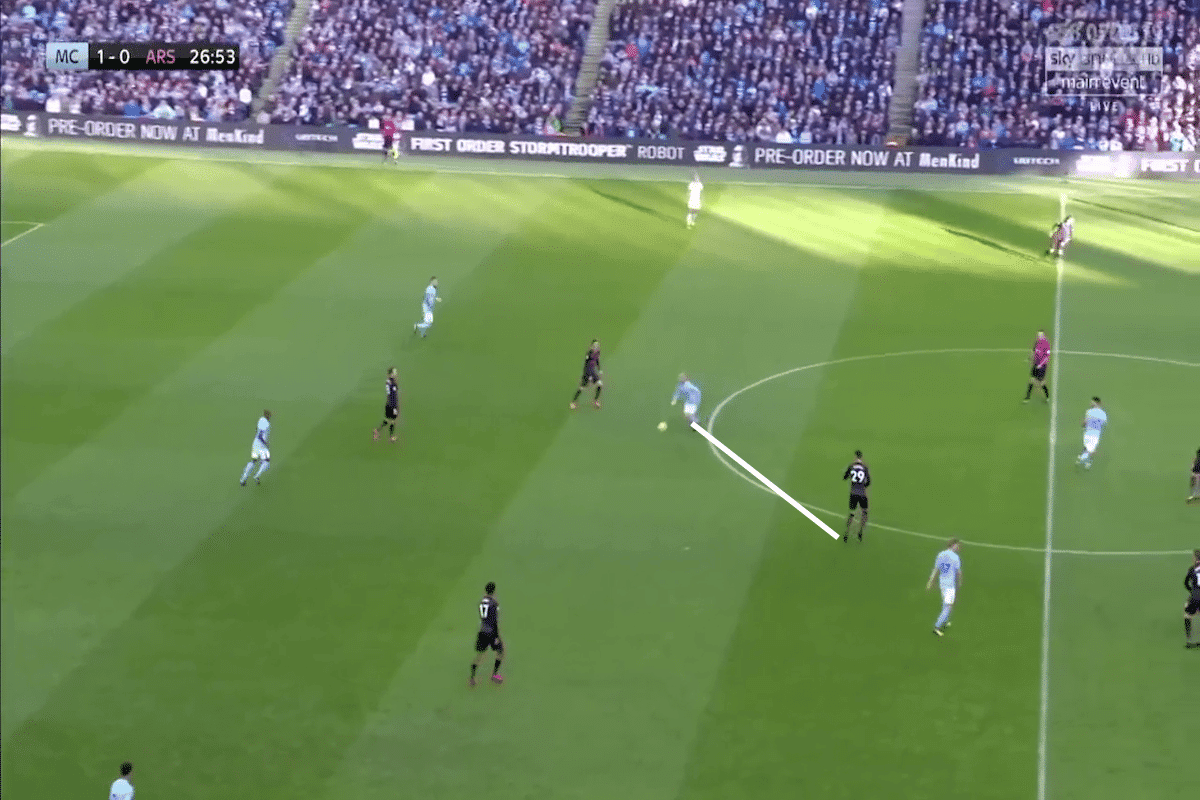 As you can see above, Silva receives a pass on the edge of the centre circle. At first glance, it may not look as though there is an immediate danger for Arsenal. However, the Gunners were playing a high-line and, if you're going to do that against a side like City, you must cut off the supply to their attackers. 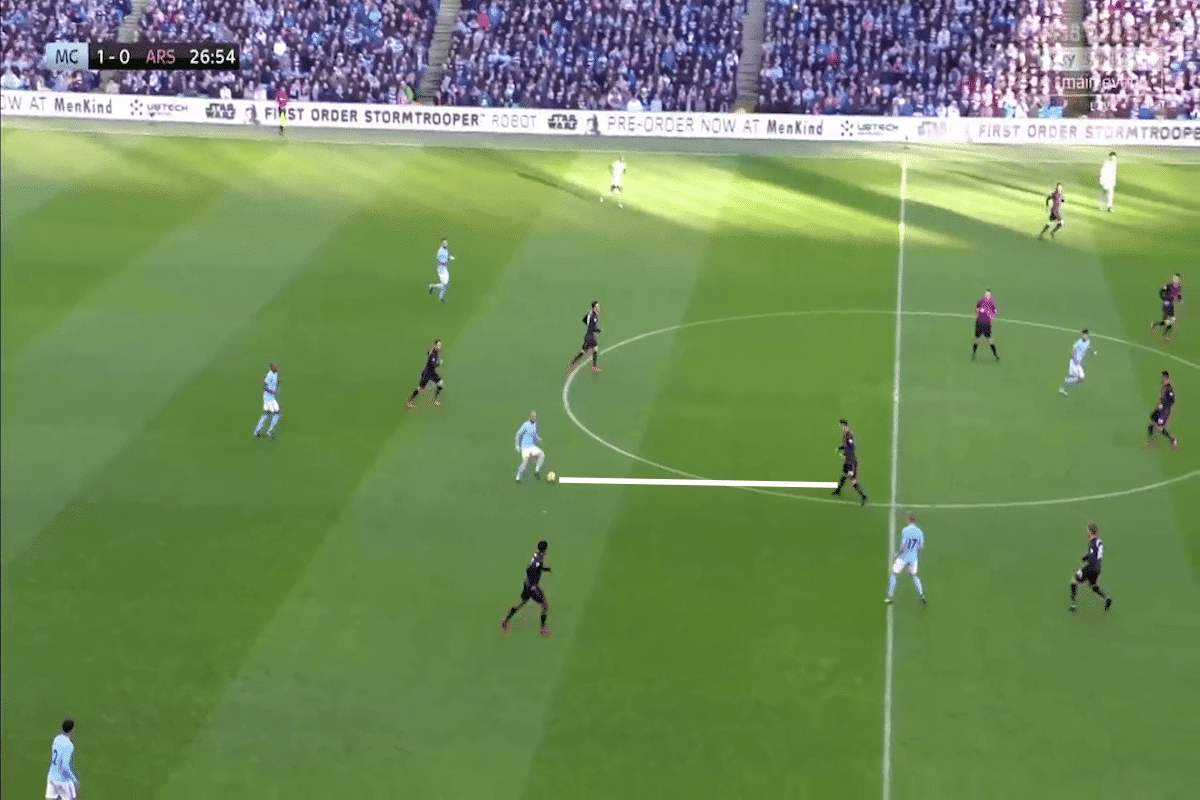 That means closing down Silva when he's on the ball. Like Chelsea's Eden Hazard, Silva is a master at shielding the ball when he's in possession. However, pressing him will perhaps force him into a safer pass as he does not want to lose the ball. Granit Xhaka, unfortunately, does not realise this. 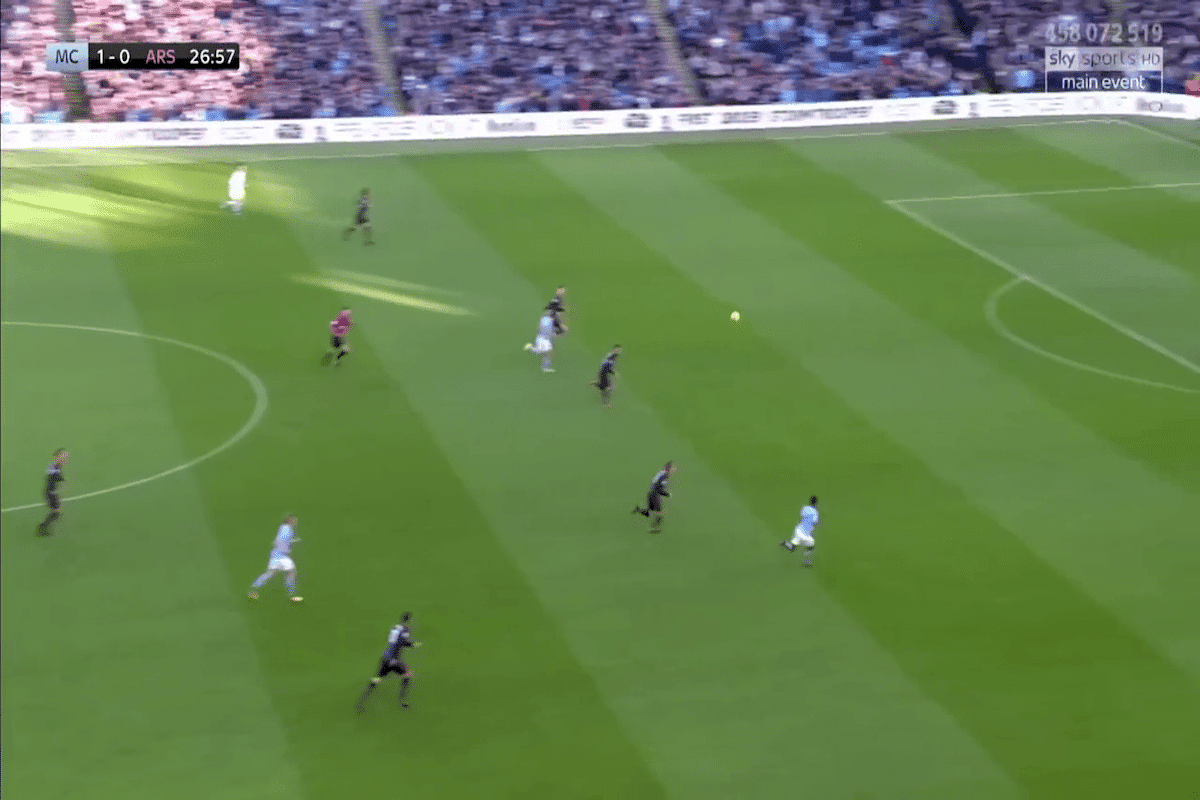 Allowing Silva far too much time and space to spot a run, Sterling is freed down the right flank. That particular attack did not come to anything, but it was an example of how dangerous Silva can be, even from deeper positions.

How Does He Compare To Other Playmakers?

Silva has eight assists in the league this season – only two below team-mates Sané and De Bruyne who lead the way.

De Bruyne and Silva are, statistically speaking, the two most effective creators in the division.

Last season, De Bruyne and Silva had the two highest expected assists (xA) rating, managing 13.09 and 10.1 respectively. The Belgian ended up with a staggering 18 assists, while Silva notched seven. This season Silva is on 6.55 edged his in the xA column while his team-mate is on 8.38. With the Spaniard missing a few games due to personal reasons, he's not too far off the Belgian at all.

Silva continues to be one of European football's shrewdest users of the ball in the opposition's half, completing more passes in the final third this season than any other player. It's an indicator of how sharp and instinctive Silva's passing is in tight areas, surrounded by defenders.

His link-up play with strikers is second-to-none and knows precisely when to play that killer pass, waiting for the slightest crack to appear in a defence before exploiting it. Timing, awareness and rhythm: they are three attributes that Silva combines to be one of the deadliest architects operating in Europe's top five leagues.

City's title-winning spine from years gone by has disappeared. Joe Hart was moved on to West Ham United in the summer after spending a year at Torino, the defence has moved on without the perennially-injured Vincent Kompany, while there is seemingly no way back into the starting line-up for Yaya Touré. Even Agüero has been forced to work for his starting berth under Guardiola thanks to the emergence of Gabriel Jesus, yet Silva has remained.

Silva has a readymade successor at City in his namesake Bernardo, but the fleet-footed Portugal international is being made to wait for a proper run in the team thanks to Silva's continued excellence.

City are currently producing some of the most exhilarating, relentless attacking football the Premier League has ever seen and it's no coincidence that Silva has been the creative hub throughout, stringing passes and unlocking defences as masterfully as ever.