You have to go back to Walter Smith in 1998 to find a new Everton manager who claimed fewer points in their first 23 Premier League matches than Marco Silva’s 30.

That comparison is all the more poignant in the context of England’s introduction to Marco Silva, via the rant of Paul Merson upon the Portuguese’s appointment as Hull City manager in 2017.

Two years later and it’s hard to know whether Merson, as difficult as it is to admit, had something of a point that an English manager could have been given the job instead.

Silva’s half-season at Hull was good, results enough for 14th during his spell but ultimately in vain thanks to their poor start.

He then moved on to Watford, and things started well. But the Hornets' 2017/18 campaigned tailed off dramatically after Silva decided he wanted to go to Everton after just 13 games in charge at Vicarage Road. He was eventually sacked in January.

Silva got his wish in the summer, though. He arrived at Goodison Park and plenty was expected. Yet things at Everton seem distinctly mediocre despite having spent around £270m in the last 18 months.

However, Silva’s slow start needs to be seen in the context of a pattern.

Since David Moyes left the Toffees, each new Everton manager has gained fewer and fewer points in their first 23 league matches. The current man in charge is just the latest dot on a trend line. 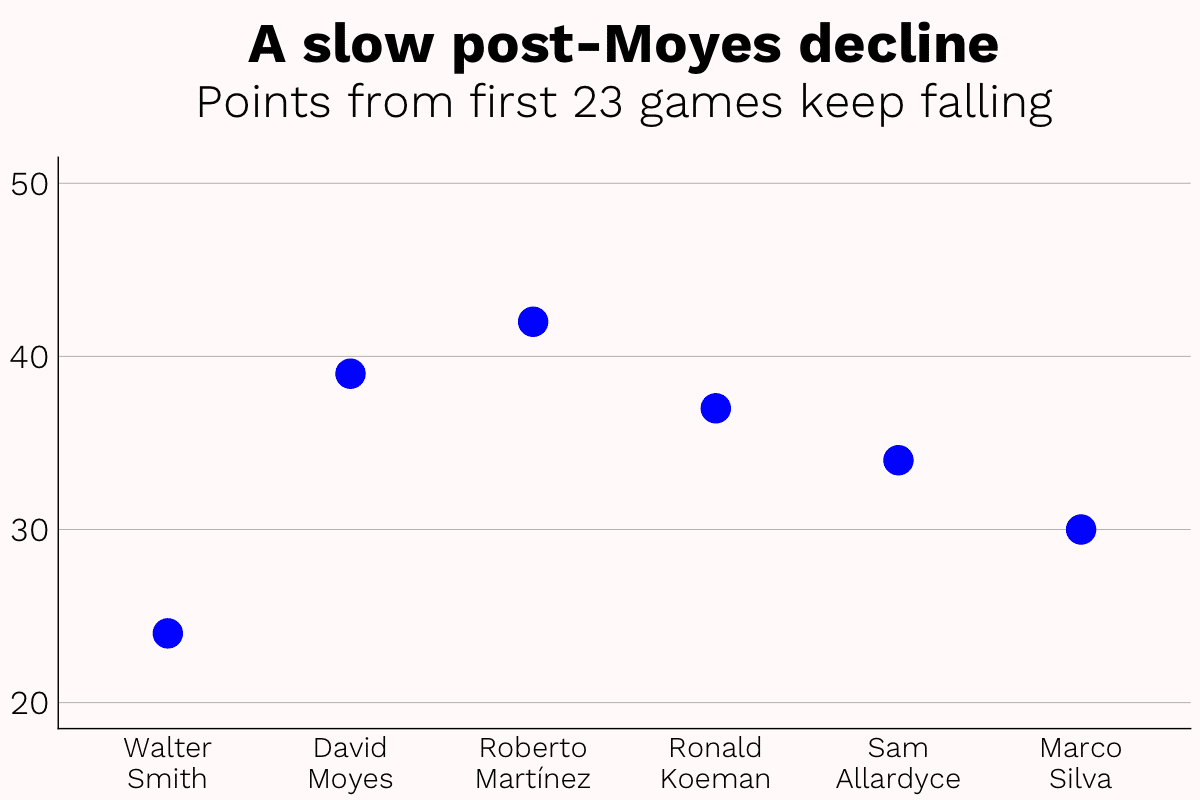 And when one looks at the £270m spent, it’s remarkable how many were in positions that desperately needed filling.

Jordan Pickford was an objectively good signing. As was Michael Keane, a worthwhile (young) addition to a centre-back corps that was Phil Jagielka, Ashley Williams and unreliable Ramiro Funes Mori.

The sales of Romelu Lukaku and Ross Barkley brought in nearly £90m to spend on attacking and midfield players, although the way Everton used it was unwise, and that’s putting it nicely. Gylfi Sigurðsson, Cenk Tosun, Davy Klaassen, and Theo Walcott amount to maybe one-and-a-half successes out of four.

It’s only really been in the summer of 2018 that Everton’s recruitment hit its stride.

Richarlison and Lucas Digne have become instant starters, with Kurt Zouma and André Gomes proving to be immensely useful loans. Yerry Mina, at 23, brings the average age of Everton’s contracted centre-backs below pensionable age even if he isn’t yet playing, and Bernard on a free is superb business.

Although one could say that this should halt the decline, it’s been Silva who’s had to bed all of these players in. There’s one other thing to consider as well…

The current Premier League has a strength at the top end that is unheard of. When Smith reached 23 games in 1998, top of the league Manchester United has collected 44 points. The Red Devils have that total this season but are in sixth. There’s simply not as many points to go around anymore.

Silva has managed to improve the Everton team compared to Allardyce’s reign, although only marginally. The team’s expected goals figures are slightly better on both the attacking and defensive end, but are still mid-table on both counts.

Recent defeats against Brighton, Leicester, and Southampton are concerning, but the three games were on a statistical knife-edge. That’s some comfort — they could have easily earned six points rather than none — but that they were that close in terms of chances created is perhaps a worry.

Or perhaps it’s just confirmation of how Everton have slipped down the Premier League pecking order. Southampton under Ralph Hasenhüttl are trying to reclaim their place in the midtable and Leicester have been there since winning the title.

Everton are also below Watford and West Ham, and level on points with Bournemouth. Each, in their own ways, deserves to be there.

Silva might not be radically improving the Toffees, but he’s come into Goodison Park as the club are only just beginning to right a ship that’s been going awry for several years. They’d be able to get away with that if the league wasn’t the most top-heavy it’s ever been.

Olympiacos might have won the Greek league 107 times in 106 years, but in 2018/19’s Premier League there are six teams worthy of the top four and another sixth worthy of seventh-spot. It's little wonder then Silva doesn’t quite look so shiny.