Given their success in the Champions League over the last three years, it is no surprise to see Juventus’ fringe players linked with moves away. And Kwadwo Asamoah looks set to become the latest.

A number have already left the team who currently sit top of Serie A; Mario Lemina, Kingsley Coman and Roberto Pereyra are among those to leave. Now, despite enjoying a superb 2017/18 thus far, utility man Asamoah is seemingly set to be the next man to quit the Italian giants in search of a more prominent role.

A Manchester United transfer target before joining Juventus from Udinese in 2012, Asamoah was brought to Turin as a powerful, energetic midfielder. But Antonio Conte had other plans for the Ghanaian and converted him into a left wing-back with great success.

When Max Allegri replaced Conte however, he largely dispensed with his predecessor's favoured 3-5-2 formation and instead used a more orthodox four-man defence. Patrice Evra and Alex Sandro arrived to relegate him to a bit-part role but, despite suffering with major injuries, Asamoah slowly won back the confidence of the new coach as the backup left-back.

Indeed, he has – as he did on Tuesday against Real Madrid – started some hugely important games there, allowing Sandro to move into a more advanced role. This season in particular he has been in excellent form, delivering a string of high-quality performances which culminated in his match-winning role in the second leg of Juve’s Champions League last-16 clash with Tottenham.

Without the impact made by Asamoah and fellow substitute Stephan Lichtsteiner at Wembley, the Bianconeri would almost certainly have been eliminated, something Allegri was only too happy to admit in his post-match press conference.

“I made changes because we needed players with different characteristics,” the Juve boss told reporters. “Asamoah is extraordinary in his passing, and has been really underestimated throughout his career.”

That is unquestionably true, and having made 16 appearances in Serie A this term his average of 62 passes per 90 minutes reflect Allegri’s opinion. Connecting with 89 per cent of those attempts while completing 2.1 take-ons and creating 0.8 scoring chances per outing, Asamoah has proven he can make vital contributions when his side have possession.

He has continued to be a reliable defender, too, averaging two tackles and 1.1 interceptions per game while boasting intelligent positioning, excellent timing and diligent tracking of any opponent he is tasked with marking. 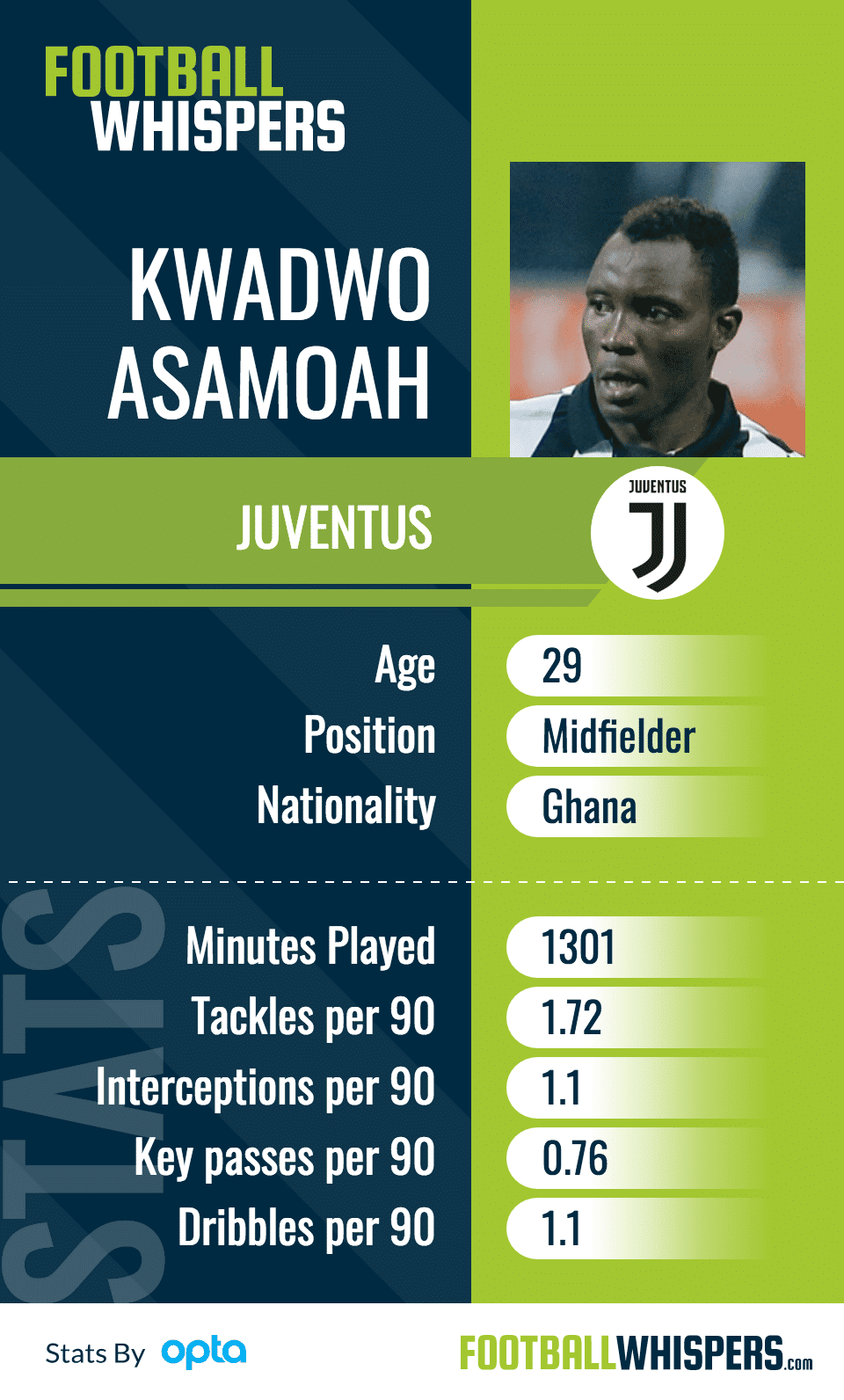 Yet it seems he will still be allowed to leave the club at the end of the season. His contract expires in June and his agent has denied he has already agreed terms with Inter Milan over a summer move to San Siro.

While looking to downplay the chances of him joining the Nerazzurri, Juventus director general Beppe Marotta admitted in a recent interview that the 29-year-old was likely walk away at the end of the season.

“If a player wants to leave, whether they are under contract or not, we try to make them happy,” he told Mediaset Premium. “If Asamoah has already agreed a transfer elsewhere, and that doesn’t seem to be the case, it’d only be logical. We don’t try to convince players who no longer feel happy to continue here, we just let them go.”

Currently earning €2.7 million (net) per year, it is expected he would be looking for more than that from a new club, with various in Italy and England claiming he is a Spurs and Everton transfer target.

Galatasaray were strongly linked in January, but with Sandro the only alternative, Juve were too short at left-back to contemplate selling Asamoah any sooner.

One reason for their apparent indifference to offering him a new deal is the imminent return of Leonardo Spinazzola from Atalanta. The 25-year-old is a graduate of the Bianconeri academy but has blossomed into a genuine talent during his two seasons in Bergamo, gaining invaluable experience in the club’s march to the knockout stages of the Europa League this term.

Juve pushed hard to bring him back last summer and, while his current club resisted, there is hope in Turin that he can continue to improve over the coming years.

Already a full Italy international, his presence in the squad will make Asamoah redundant, and it makes little sense to hand a new contract to a player they no longer need. That should not diminish his contributions to Juve’s recent success, nor negate the fact he is having an excellent 2017/18 thus far.

Many teams could use a player of his standard, and very few boast a reserve of such high quality. Yet, as the Bianconeri push to become a member of Europe’s true elite, such men are likely to be pushed aside.

Wherever he lands this summer, Asamoah is likely to thrive once again, meaning Everton or Tottenham would be wise to snap him up before somebody else does.