Pierre-Emerick Aubameyang is open to a move to Liverpool. No, this isn't Football Manager or FIFA. This is real life, and the Reds could be on their way to making the statement of the summer.

Ridiculous links to players are part and parcel of the summer transfer window. There are always a few outrageous links which even the supporters with the most quixotic of dreams have trouble believing. In the past, the Borussia Dortmund hitman being linked to a move to Anfield would fall into that category.

He's one of the elite forwards in the world football. For his services the Bundesliga side would command a fee between £60-70million – close to doubling the club's record ever transfer. He's also not your stereotypical Liverpool signing; he's 28 years old and there's very little room for him to improve.

The player himself promised his father he would play for Real Madrid and with the future of Cristiano Ronaldo up in the air there's a possibility they're in the market for a striker this summer.

All of that, in theory, works against Jürgen Klopp reuniting with the the Gabon international on Merseyside.

However, this is a new Liverpool. The club are a different beast completely with the owners, Fenway Sports Group, backing the German manager in the market.

If reports are to be believed, they were prepared to part with between £50-60million to land Southampton's Virgil van Dijk and offered €75million to Monaco for their teenage sensation Kylian Mbappé.

Dortmund are said to want £61million for the striker who netted 31 times in the league last season in more of a poacher role. According to Le Parisien, the Anfield hierarchy are prepared to meet Dortmund’s valuation and the striker is open to the move.

Aubameyang is back on the market after Ligue 1 giants Paris Saint-Germain backed out of a deal to bring the former Saint-Etienne wide forward to the capital.

followed this report up by claiming PSG's new sporting director Antero Henrique wants to focus on other striking options.

In football it's not often an opportunity like this presents itself. Liverpool have the chance to go after a world class striker with very little competition. If they're serious about turning the Reds into title contenders then this would be quite the statement.

The sort to make clubs around Europe sit up and take notice.

Aubameyang is a difference maker and a match winner. More importantly though, he's both of those things now. It's what separates him from those normally linked with a move to Liverpool.

Many players arriving on Merseyside do so with the potential to make a difference. Of course, there are no guarantees in football but the ex-AC Milan man would arrived having done the business both domestically and in Europe.

He could well be the difference between a top four challenge and an assault on the title for Klopp and his side next season. For all of Liverpool's devastating attacking play last season they lacked a potency of others above them.

While three players did get into double figures – Roberto Firmino, Sadio Mané and Barcelona transfer target Philippe Coutinho – the team lacked what you would consider to be a regular, reliable goalscorer. Firmino is a lot of things but question marks remain over just how clinical he is.

In those games, the ones which hinge on one or two big moments, can the versatile Brazilian be relied upon to put the ball in the back of the net? If the Reds are able to upgrade their team this summer then there's no reason Klopp couldn't name Firmino as a supporting striker with an attacker ahead of him.

The former Hoffenheim man's movement coupled with a prolific striker could mean the team are in business. On paper, a partnership between Firmino and Aubameyang hits all the right notes.

The former Lille loanee matured under former manager Thomas Tuchel. The one-time all-round forward is now much more of a poacher. He's relying less on individual brilliance and simply ensuring he gets himself into dangerous areas to finish off the chances Dortmund carve out.

Many times last season the Reds would play the prettiest of football but failed to show the ruthlessness required in the penalty area to put teams to bed. Throw Aubameyang into the equation and it's safe to assume Liverpool don't finish the season with ten draws. 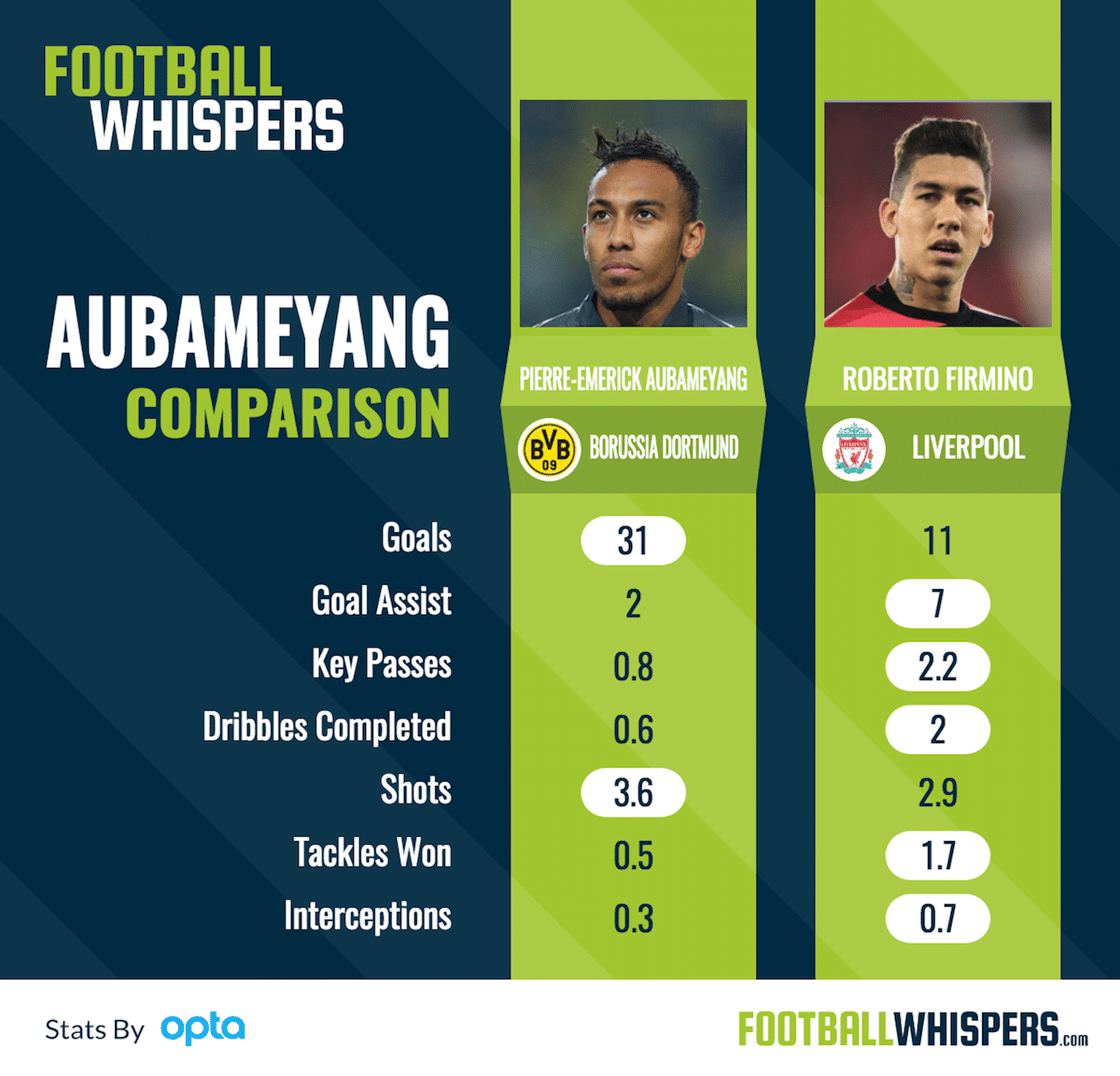 As you can see in the graphic above, Aubameyang is the finisher and Firmino is the creator. Pairing the two and supporting them with the likes of Coutinho, Mané and long-term transfer target Mohamed Salah could result in Liverpool have one of the most destructive attacks in world football today.

A nice blend of pace, power and creativity with a natural striker to benefit from it all.

The Merseyside club found it difficult to break teams down who sat deep and it's what saw them fall out of the title race in January. It's the first real chance for Klopp, the recruitment team and FSG to show they're prepared to right those wrongs.

The claim in January was the right players weren't available, but now they seemingly are. It's also the first opportunity for the three aforementioned parties to test the German's appeal alongside Champions League football.

The club need to land Aubameyang to show they mean business. They're in an ideal place to lure the 28-year-old to Anfield and fans should be getting excited about the prospect.