With the added demands of Champions League football coming their way in 2017/18, it was imperative that Chelsea strengthened their squad this summer. That they have done, with several major signings bolstering them in defence, midfield and attack.

However, there remain a number of positions yet to be reinforced. Central midfield, following the sale of Nemanja Matić to Manchester United, is one of them; others include right and left wing-back, where Victor Moses and Marcos Alonso could do with some quality support.

One of the latest players to be linked with the Premier League champions is Alex Oxlade-Chamberlain. As a natural winger who has been converted into more of an attacking midfield all-rounder in recent years, the Arsenal man may not immediately stand out as what Antonio Conte needs right now, but he could be ideal.

Chelsea aren’t afraid to spend on players, as they have shown quite clearly this summer. However, their spending tends to be targeted. They aren’t as extravagant as some of their rivals, namely Manchester City and Manchester United, and instead look to bolster pinpointed areas of weakness.

Oxlade-Chamberlain would fit this policy well, given he could fill multiple different roles. His signing – which, according to the Evening Standard is becoming an increasing probability – could improve Conte’s side in three key positions for the price of one player, making him a potential bargain.

Versatility isn’t always a good thing in football – it can make utility men out of quality players. Oxlade-Chamberlain seemed certain to suffer this fate, effectively becoming the 12th man, called upon to fill in when others were injured or suspended.

He was already seen as tactically flexible going into last season, having played in a variety of midfield roles. He had been brought up as a flying winger at Southampton, but Arsenal had utilised him in most attacking roles bar striker. In 2016/17, however, he moved deeper.

While he still struggled to assert himself upon the starting line-up –13 of his 29 Premier League appearances came from the bench – he showed himself to be an able performer in central midfield and at right wing-back. Then, in the FA Cup final win over Chelsea, he played well at left wing-back.

Rather than sulk about being used in a more defensive position, he studied the role intently, trying to learn from the greats.

“When I’ve watched teams that play with five at the back and wing-backs, I’ve looked at their starting positions and positions out of possession because that comes a little bit more unnaturally to me,” he said.

“When I’ve watched Dani Alves recently, he might not play the five at the back, but the way he plays, he marches on and he adds a lot in an attacking sense as well as defensively. Players like that, you watch and you learn from them.” 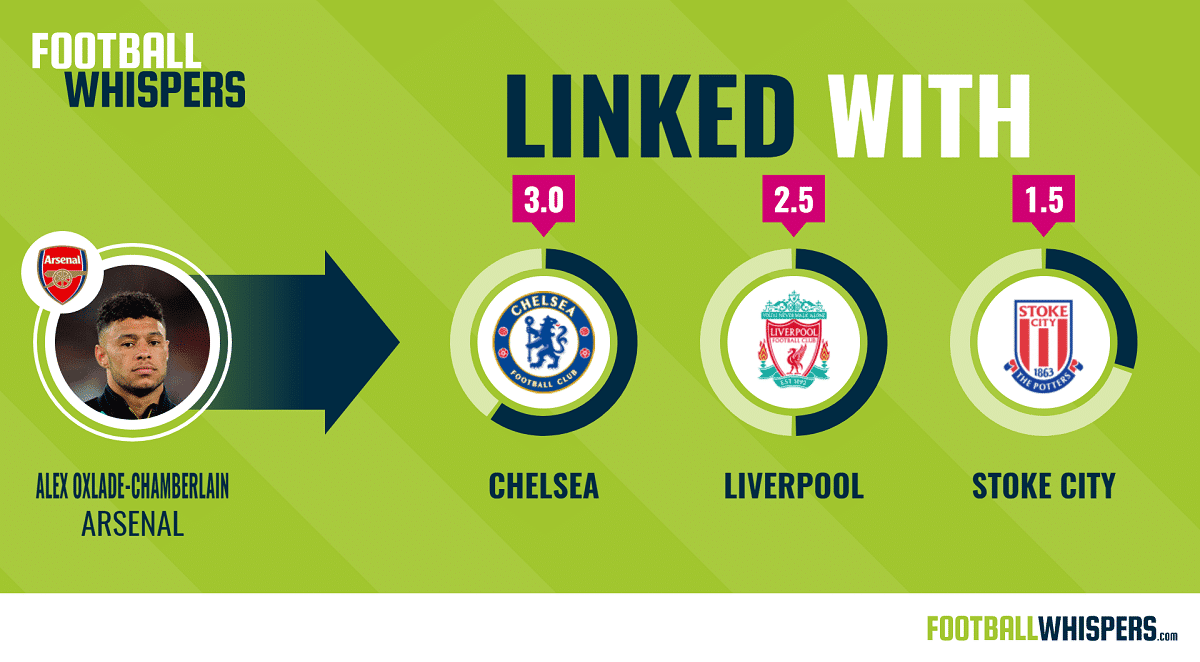 Considering his abilities, it’s a surprise that it is only now, at the age of 24, that Oxlade-Chamberlain is perceived as a serious wing-back option. He is highly mobile with real acceleration, as the dribbling ability to prevail in one-on-two situations, never mind one-on-ones, and has the technical quality to pick out players in the final third with through balls and crosses.

His energy and athleticism enable him to patrol a flank individually, while his ball skills mean he can both beat his man and act as an effective supplier to the attack. And, with the back three on the rise in English football, he may have switched roles at the perfect time.

Having adapted well to life as a right wing-back, Oxlade-Chamberlain also showed the offensive potential of being used at left wing-back in last season’s FA Cup final. Cutting in from the left onto his favoured right foot, he can open up the whole pitch and combine well with team-mates. He has continued on the left so far this term.

And, as he appears comfortable on both wings, he could save Conte the hassle of looking for two separate players to cover both positions.

Oxlade-Chamberlain compares well statistically to Chelsea’s current wing-back pairing of Moses and Alonso. While he averaged far fewer passes than them per game last term, he also contributed more key passes. In addition his pass success percentage was higher at 82.2 per cent, and his 2.1 completed dribbles per game was almost as many as Moses and Alonso’s output put together.

Attacking the space in front of him at right wing-back or cutting infield at left wing-back could maximise the Englishman’s dribbling, pace, vision and vigour. However, all of those traits would also be welcome in the centre of Conte’s midfield.

N’Golo Kante and Tiémoué Bakayoko look set to be the Italian’s first-choice partnership in this area going forward, but Oxlade-Chamberlain’s ball control, low centre of gravity, strength and passing would make him a valuable back-up option to have.

THE CASE FOR SIGNING OXLADE-CHAMBERLAIN

Instead of moving to sign three different players to offer competition at right wing-back, left wing-back and central midfield, Chelsea could sign Oxlade-Chamberlain and get cover for all three. This would save them from pursuing several expensive additions.

Juventus left wing-back Alex Sandro has been heavily linked to the Premier League titleholders in recent weeks. The Brazilian is one of the finest in the world in his position and would be an upgrade on Alonso within Conte’s setup, but he would also require a huge transfer fee.

The Italian champions, having already let Leonardo Bonucci leave for AC Milan, are not in the mood for more major sales this summer. Sandro is fundamental to their system, which explains why they reportedly knocked back a £53.7million bid for him from Chelsea.

On the other flank, there has been speculation that Antonio Candreva could be set to reunite with Conte, his old national team boss. The Italian winger has been used at right wing-back for both club and country, though Inter Milan are said to want just over £38million for the player.

Another Chelsea target to have emerged is Danny Drinkwater. The Leicester City ball-winner would bring dogged tackling and ceaseless running to the midfield, but he would do so for a transfer fee of around £30million.

All in all, the three players mentioned above could cost a combined £120million in transfer fees alone, whereas Oxlade-Chamberlain – considering he has just one year left on his contract – would come for a lot less.

Indeed, reports suggest that a £35million bid would be enough to secure a deal for the player, meaning a saving of around £90million could be made by the English champions.

With a sound tactical, statistical and financial case for the move, Chelsea signing Oxlade-Chamberlain could not make more sense.