Shrewsbury should be safe from relegation with a 10 point buffer but we don't see that gap widening on Easter Monday. The Shrews have lost their last two games and have won just one of their last five at home. By contrast, Plymouth are unbeaten in their last three fixtures and have collected two wins in that time. Both of those victories have come against sides hoping to hunt the likes of Shrewsbury down. It's true that the Pilgrims' away form is poor but they have a reasonable record at the Montgomery Waters Meadow having lost just once in the prior four visits.

It's hard to see this match not featuring goals at either end. After all, only one side have failed to score across Shrewsbury's last five home matches. It's just three in 10 when looking across all venues. Then you have Plymouth; they've scored in seven of their past 10 away games. Finally, you have their head-to-head record, which has seen both teams score in four of their past five meetings too, which aids our prediction further.

Goals to be scored in both halves

The last of our three tips sees us make the prediction that there will be at least one goal in each half of football. Why? Well, Shrewsbury's home form lends itself to this bet reasonably well; of their previous six matches there have been goals either side of the interval in five of them. Then you have the away side to consider. Plymouth's away form isn't dissimilar to the Shrews home form in respect of this bet; four of their past five games have seen goals in each half.

All the stats and odds for Shrewsbury vs Plymouth

A battle between two that should be safe from the drop

These two sides aren't in ludicrously different positions in respect of the league table. Both should enter the final weeks of the season with breathing space above the drop zone; they will both require a bit more time – and a few more points – before they can fully relax though with neither mathematically safe just yet. Given that fact, Shrewsbury nor Plymouth would be overly happy with a draw and therefore we should see an encounter where two sides go at one another.

FAQ about Shrewsbury vs Plymouth 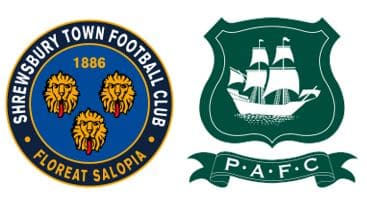