Shrewsbury look like they've done enough to avoid the drop this season. With the way things are going, that might be the best Doncaster can hope for next season. Will they get back to winning ways on Saturday? Find out with our Shrewsbury vs Doncaster match preview with free tips, predictions and odds mentioned along the way.

If you're looking to the form book for a helping hand on how to make your betting predictions on this game then you might have to rethink; certainly from a match result perspective. Why? Well because neither team have any real form. Doncaster are define having the worst of it though; they've not won in nine, have lost their last five and have been absolutely breezed past in their last two outings. Shrewsbury are just inconsistent hence they sit mid-table in the table when looking across the last 10 fixtures. They also won their last home game 3-0 and have beaten Donny in the last two meetings between the sides.

Shrewsbury to record a clean sheet

Our tips have already shone a light on Doncaster's woeful results of late and it's not just avoiding defeats that has caused them issues. They are also struggling to score; they've netted just six goals in their last 10 matches and have failed to score in six of them. Shrewsbury, despite their league position just ahead of the battle for survival, actually have a reasonably mean defence with 46 goals against all season. They've also recorded shutouts in two of their last three games.

A double chance and limited goals with a #GetAPrice

Our final prediction is almost a combination of the first two tips we've made. We've already justified why we think Doncaster will struggle to carry too much of an attacking threat, which addresses the under 0.5 prior to the interval. We've also backed Shrewsbury to win although you'll get the added security of a draw with this wager. Then it's all about the match containing fewer than four goals. In the last 10 games Shrewsbury's results have exceeded the 3.5 mark once with Doncaster's eclipsing it twice. It's a rarity.

Shrewsbury vs Doncaster: Find out all the stats you need

A nothing game but Donny's form is desperate

Doncaster might be safe for this season but there is no doubt their fan base is fearing the worst ahead of next year. They'll be desperately awaiting the summer so they can be out of their misery given such a poor run. Shrewsbury will be looking forward to the end of the season too but they've earned their rest a bit more having done enough to keep themselves in the division – unless their is an absolutely insane change of multiple fortunes at the bottom. There will be more exciting games to watch in the league this weekend but it could still be a decent match.

Shrewsbury vs Doncaster: A brief FAQ 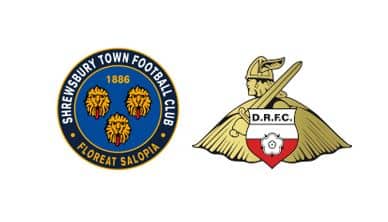