The upcoming round of EFL Cup brings us a few interesting matchups, like the Shrewsbury vs Burnley duel scheduled for Tuesday, August 23rd. Here's our preview of this game and some free betting predictions to check.

Our top Shrewsbury vs Burnley betting tips and picks

If you need a bit of help to find the best bet for the Shrewsbury vs Burnley duel, check our top betting tips for this duel:

While the guests are far from being in great form since they have six points from five matches in Championship, the home team is not doing much better with five points from five rounds in League One.

And given the simple fact that Burnley is playing in a league above Shrewsbury, we can see why they are the favourites in this match and we expect them to win the game.

These two teams did not meet recently, so we can't use h2h data to help us decide on the next bet. Despite this, we feel that this game can go under 2.5 total goals.

If you want to know more about this game and the teams, check our preview of the match right here:

The new season in League One for Shrewsbury started pretty much in the same way in which the last one ended – widely inconsistent. The team started this season with one win, two draws, and two losses, which puts Shrewsbury in the eighteenth place in the standings, exactly where they finished last season.

The team is currently dealing with injuries to Aiden O'Brien and Elliott Bennett, who are out of the next game.

Although they lost just one game so far in Championship in their first season back in the competition after they got relegated from Premier League last season, Burnley also have just one win too, along with three draws. So, they are currently sixteenth in the standings with six points from five matches.

Meanwhile, Ashley Westwood is injured right now and out of the next game, while Scott Twine, Kevin Long, and Johann Berg Gudmundsson are questionable. Also, Ian Maatsen is suspended.

The best odds and key figures for Shrewsbury vs Burnley

If you want to check the top odds and stats for Shrewsbury vs Burnley, you've come to the right place:

The most common questions for Shrewsbury vs Burnley 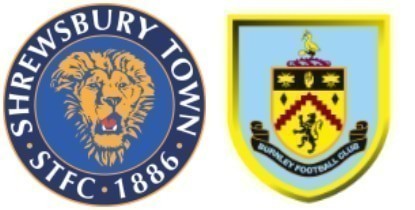