Any manager who finds his team battling relegation often dips into the same lexicon of militaristic terms as they look to assure fans that the required effort is being committed, and the correct words spoken.

No longer about expression or aesthetics, football becomes a “battle”, in which the team must “fight” for survival, with the players “digging in” and “showing what they're made of”.

Managers in such situations always preach a back-to-basics approach, too. This, more than any vague, fan-appeasing euphemisms, makes sense for a team in a dire predicament. By simplifying individuals' tasks, fewer errors should be made, with each player benefiting from a well-defined role and personally accountable for their remit.

But what about beyond a relegation battle? When the scrap for survival is won, can a simplified, pared-down approach yield longer-term progression and reach loftier goals?

Shrewsbury Town, thanks to the intelligent work of manager Paul Hurst, are proving it can.

When Hurst took charge at Montgomery Waters Meadow in October 2016, Shrewsbury were rock bottom of League One. His job, of course, was to steer them to safety.

He has since overseen the Shropshire club's transformation into genuine promotion contenders – they currently sit second in League One – and all thanks to the work ethic he has instilled in his players and a digestible, consistent on-field system.

Winless in the four games prior to his appointment, the Shrews picked up a point in his first match in charge, away to Southend United, and then recorded a resounding 3-0 victory over Barnet in the FA Cup a week later. The former Grimsby manager's impact was instant.

When January rolled around, Hurst was active, signing eight players and letting another eight go. Combining the signings of players familiar to him from previous clubs, like Toto Nsiala and Alex Rodman, with astute loan arrivals from clubs higher up the pyramid, such as Stefan Payne from Barnsley, who joined permanently in the summer and is the club's top scorer this term.

“The squad I inherited was on the experienced side, shall we say, and there were a few of them who had played higher up for so-called bigger clubs,” Hurst told Sky Sports earlier this season.

“Something certainly was not right. But thankfully we managed to get things going. Now, I think there is a lot more appreciation of what it means to be playing for Shrewsbury Town.”

Town climbed out of the relegation places for the first time since Hurst's appointment in early January and finished the season in 18th, three places and two points clear of the drop zone. Job done. But more of the same was expected in 2017/18.

Shrewsbury have been somewhat of a yoyo club at this level in recent years, bouncing between the third and four tier, and were installed as the bookmakers' favourites for relegation ahead of the current campaign – Hurst printed out their relegation odds and pinned them to the wall of the club canteen in an effort to motivate his men.

But the same methods that elevated them beyond the relegation battle last season have been maintained. And the Shrews have risen to unexpected heights.

Their status and budget meant Shrewsbury were never likely to have the most talent-rich squad in League One, that much was beyond Hurst's control. But the manager could make his side the fittest, and that is what he has sought to do, initiating two double training sessions a week. Town may not always be the division's prettiest side, but their stamina has reaped dividends and allowed them to maintain their intensity for 90 minutes.

Tactically, Shrewsbury's approach is conservative. Hurst has remarked that the team lacked an identity when he arrived, with previous boss Micky Mellon a reactionary coach who set up his team in accordance with the demands of their opponents from week to week.

That is no more. The Shrews now benefit from tactical continuity, with Hurst regularly deploying three in midfield, with one holding player protecting the backline, and attacks funnelled down the flanks – with the ball, it's 4-1-4-1; without it, it's more akin to 4-3-3. 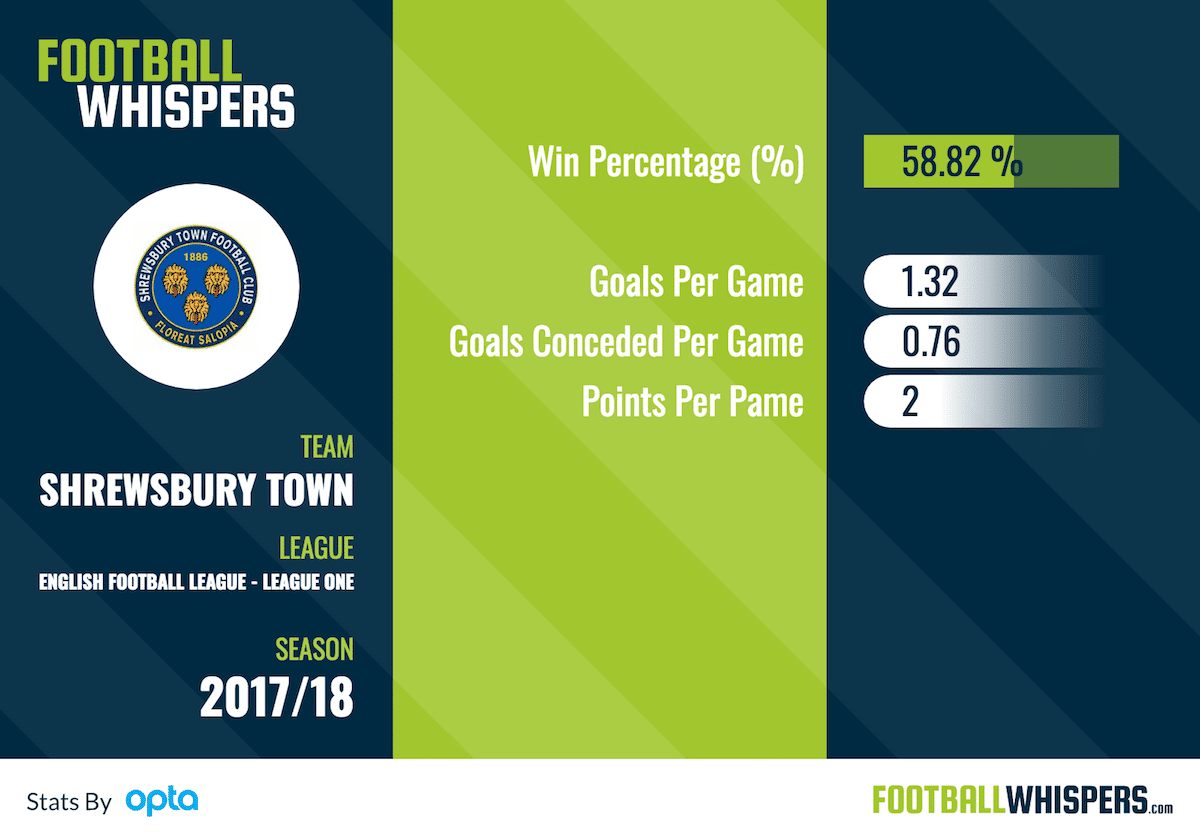 Organisation and hard work are the orders of the day, and these are the principles Shrewsbury's unlikely promotion push is built upon. Difficult to break down and efficient, rather than flashy in attack, Town's League One fixtures this season average the lowest total goals per game in the division (2.09), while they have scored fewer goals (45) than the rest of the top five – top-scorer Payne is yet to crack double figures.

Only 62 per cent of Shrewsbury's fixtures this season have produced two or more goals, while only 35 per cent have yielded three or more – both averages the lowest in League One. Theirs is a no-frills approach, but it's highly effective. Indeed, they were the Football League's last remaining unbeaten side prior to suffering their first league defeat of the season in late October.

Whether they can hold on to an automatic promotion place remains to be seen – they are two points ahead of third-placed Wigan Athletic, but Manchester City‘s FA Cup conquerors have three games in hand. However, comfortably on course for the play-offs at the very least, while also in the semi-finals of the Checkertrade Trophy, Shrewsbury's turnaround is one of the stories of the English football season.

The club haven't been in England's second tier for over 30 years, and clawing their way into the Championship would be the Shrews' finest hour since they won the old Third Division in 1979.

For his part, Hurst, who holds a UEFA License (the second-highest coaching qualification UEFA offers), is open about his ambitions of managing at Championship level or higher, be that with Shrewsbury or, eventually, elsewhere.

“I’m not saying anything the chairman doesn’t know. I would love the opportunity to move up but I am still just only over a year into this job realistically,” He told The Telegraph  in January.

“I am enjoying it. But naturally, you want to go as high as you can. As a player I was fortunate enough to go from League Two to the Championship, with Rotherham, where we stayed four years and punched massively above our weight. Can I reproduce that as a manager or even better it? I’m not stupid, that is a massive dream. But I think you’ve got to be ambitious.”

Without a win in their last four home games, Shrewsbury's away form has been their saving grace, with last weekend's victory over Charlton Athletic at the Valley their fourth win on the bounce away from home. After the match, Hurst was quick to shine a light on the driving force behind their remarkable season.

“This season, realistically, is the best season the football club has had for a long, long time, certainly in League One,” he said.

“Enjoy it, get on board with it because we've got some very good players at the club and a great squad work ethic.”

If you'd have told Shrewsbury fans before the start of the season that, come March, their team would be in the automatic promotion places and one game away from a Wembley final, they'd have laughed you out of town.

It's amazing how far hard work can take you.

Crunching the numbers: Who will win the League One play-offs?