Magic of the cup? Not for West Ham United, who on the back of a good result against Tottenham Hotspur on Thursday night, produced a turgid display at League One promotion candidates Shrewsbury Town in a 0-0 draw.

The home side were the better side, with the Hammers lacking any real quality and definitely not looking a team two divisions above Shrewsbury.

It was of course a much-changed side, with West Ham playing their third game since Tuesday and handing starts to the likes of Reece Burke and Josh Cullen after their returns from Bolton Wanderers on loan.

The draw means the tie will go to a replay later this month, but what did we learn from today’s game?

Joe Hart’s move to West Ham was meant to see him refund his form after being frozen out by Manchester City and cement his role as England’s No.1 ahead of this summer’s World Cup.

But, after a good start, he had to sit out his new side’s old game at the Etihad as he couldn’t play against his parent club, handing Adrián a start.

The Spaniard took his opportunity and since then he’s been David Moyes’ first choice in goal for the Hammers.

But today’s tie was a chance for Hart to prove himself, not only being handed a start, but the captain’s armband too.

“Joe will play a lot of Premier League games this season as well,” West Ham’s manager said after their 1-1 draw with Spurs on Sunday.

“I keep saying it. I thought Adrián pulled off one brilliant save at Tottenham when he put a shot over the bar in the first half and he has done well in the games he has played.

“I am sure he is not overly happy with it but Joe is a top professional. I’m sure he’s had an understudy to him for 90% of his career and I think he’s acted in a really good manner.

“I’ve no doubt Joe will play Premier League games between now and the end of the season.”

It was a tricky start for him against his boyhood side, with the sun in his eyes, needing to ask for a cap from the crowd.

But he was the Hammers’ best player in the first half, making a good save low down from Mat Sadler and Alex Rodman in quick succession.

Hart didn’t do much wrong, and he’ll hope to put in a few more performances like this to win his place back.

With his contract up at Old Trafford in the summer, a number of clubs are thought to be looking at him, with The Sun claiming Arsenal and Benfica want him.

For anyone with an eye on him, it would have seemed the perfect chance to have a look at how he does against a Premier League side.

Yet West Ham were so poor, he was rarely tested at all.

That might be good for Shrewsbury though, with Paul Hurst wanting to keep the man who’s been so crucial in their unexpected promotion push.

“The fans have taken to him, the players have seen what a good goalkeeper he is. We would love him to stay,” he said last month.

If he does decided to extend his spell in Shropshire, he could well be playing Championship football next season.

Hernandez not the right man for Moyes

After the draw with Tottenham, I wrote about Javier Hernández and how he’d disappointed since joining West Ham and wasn’t the right man for Moyes.

This was just his second start since the Scotsman came in as manager, but as against Spurs, he struggled to get into the game.

He didn’t register a touch in the opposition box before he was taken off with 70 minutes on the clock, and with West Ham failing to find him there, he’s not going to score.

Below you can see his touches in the game, courtesy of WhoScored, with him attacking from right to left. 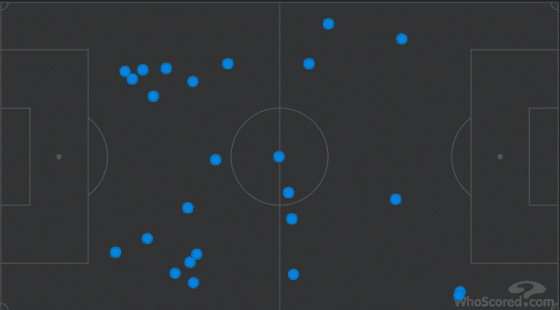 They seem to be expecting him to grab the ball from deep, beat a couple of men and reach the box, but he’s not going to do that.

What’s more, if they go long, like they tried to largely today, he’s also not the man.

He’s undoubtedly a quality finisher, but he just doesn’t seem right for West Ham under Moyes.

Did Burke and Cullen do enough to be part of Moyes’ plans?

After being called back from their loan at Bolton, Burke and Cullen were thrown straight into the starting lineup.

It’s four years since Burke’s debut, but this was just his 13th appearance for the Hammers, and he looked comfortable, despite being out of position at right-back.

Also 21, it was just Cullen’s fifth game for West Ham, two-and-a-half-years on from his debut.

He wasn’t outstanding, but given it wasn’t an inspiring display from anyone in particular from the away side, he was still one of their brightest players, taking control of the game when he went into the middle of the pitch and putting in good deliveries from set pieces.

They were involved defensively – with Burke making seven and Cullen making six tackles – the highest out of anyone on the pitch.

Them playing today means they can only either feature for the Hammers or Bolton for the rest of the season due to FIFA rules about only being able to turn out for a maximum of two clubs in a single campaign.

While they were solid, it would be no surprise to see them return to Bolton where they’re more likely to play more now Moyes has been able to have a look at them close up.

It was always going to be a tough game at Shrewsbury, who sit second in League One, but with a number of changes for their first game since Tuesday, the Hammers never really got going.

After impressive defensive performances recently against Manchester City, Chelsea and Tottenham, they just didn’t seem able to get it going against the League One side in the first half, with just 51 per cent pass success. By the end of the game, that was only 53 per cent.

And that was largely down to the impressive home side, who looked like the team from a higher division.

The Hammers may have made changes, but the likes of Burke and Cullen were at a Championship club in the first half of the season – still a league above Shrewsbury.

They’ll fancy their chances in a replay if West Ham play like they did today – Cullen may have lost a tooth and that summed up the away side’s performance – toothless.