After swooping to sign Romelu Lukaku from Everton when it seemed certain that the Belgian striker was on his way back to Chelsea, it is claimed that Manchester United are set to trump the Premier League champions once more.

The Blues have been on the brink of completing a deal to sign Tiemoué Bakayoko from Monaco for several weeks now, with the player even travelling to London to tie up the deal recently.

But the move has inexplicably stalled, with the Daily Star and the Express now both reporting that United are set to leapfrog Chelsea in the race to sign the 22-year-old midfielder.

The Express even go so far as to claim that the Old Trafford club have agreed a £35million fee with Monaco for the player, who was first rumoured to be a United target some months ago.

With José Mourinho on the lookout for a defensive midfielder to help release record signing Paul Pogba — Tottenham Hotspur's Eric Dier and Chelsea's Nemanja Matić have both been named as targets — would Bakayoko be a suitable addition for the Red Devils?

Bakayoko: A Good Fit For United?

Bakayoko joined Monaco from Rennes as a teenager in 2014, but he enjoyed a breakthrough campaign last season, making more Ligue 1 appearances (32) than his first two seasons at the Stade Louis II combined (31).

At the heart of Leonardo Jardim's exciting and dynamic 4-4-2 system, Bakayoko struck up a formidable central midfield partnership with Fabinho — also believed to be on United's radar. The pair provided a platform of steel and discipline upon which the Monegasque side's attacking flair was built, playing no small part in their run to a first top-flight title in 17 years.

For his part, Bakayoko was a powerful, athletic and technically sound operator in the centre of the park, forming the kind of double act with Fabinho that was somewhat of a throwback to the old English style of 4-4-2 midfield pairings. Rather than having one man sit and anchor midfield, they worked beautifully in tandem to ensure that whenever one advanced, the other held his position; if one went, the other stayed.

If he moves to United, Bakayoko will likely be expected to perform as a dedicated defensive midfielder, either at the base of a 4-3-3 formation of as the anchor in a double pivot alongside Pogba.

Many of his attributes line up perfectly with this kind of role: he has tremendous anticipation, reading opposition attacks as they develop and nipping them in the bud; he is a clean tackler with excellent timing; the Monaco star is athletic and strong enough to recover if caught out of position; and he is accurate in possession, completing 87.3 percent of his passes last season.

Bakayoko is also incredibly progressive for a defensive midfielder, always looking to move his side forward the second he recovers possession. 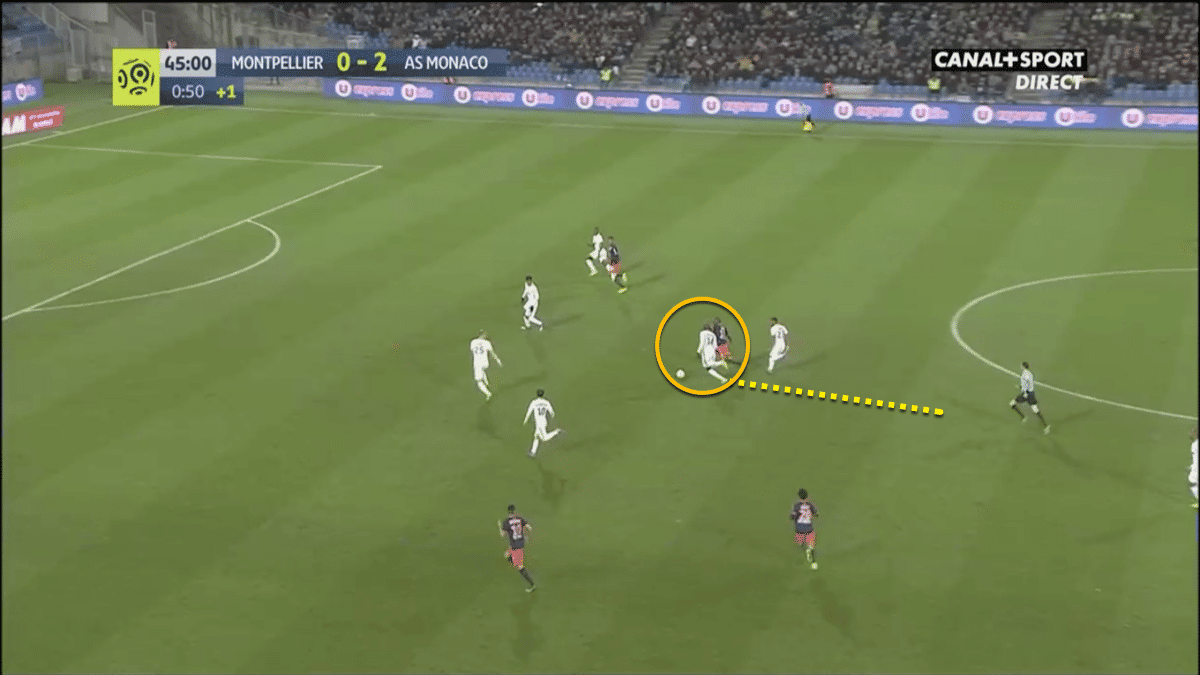 Here we see Bakayoko spot an opposition attack developing centrally in a game between Monaco and Montpellier. He recovers ground on the the advancing forward and makes a perfectly-timed tackle to regain possession. 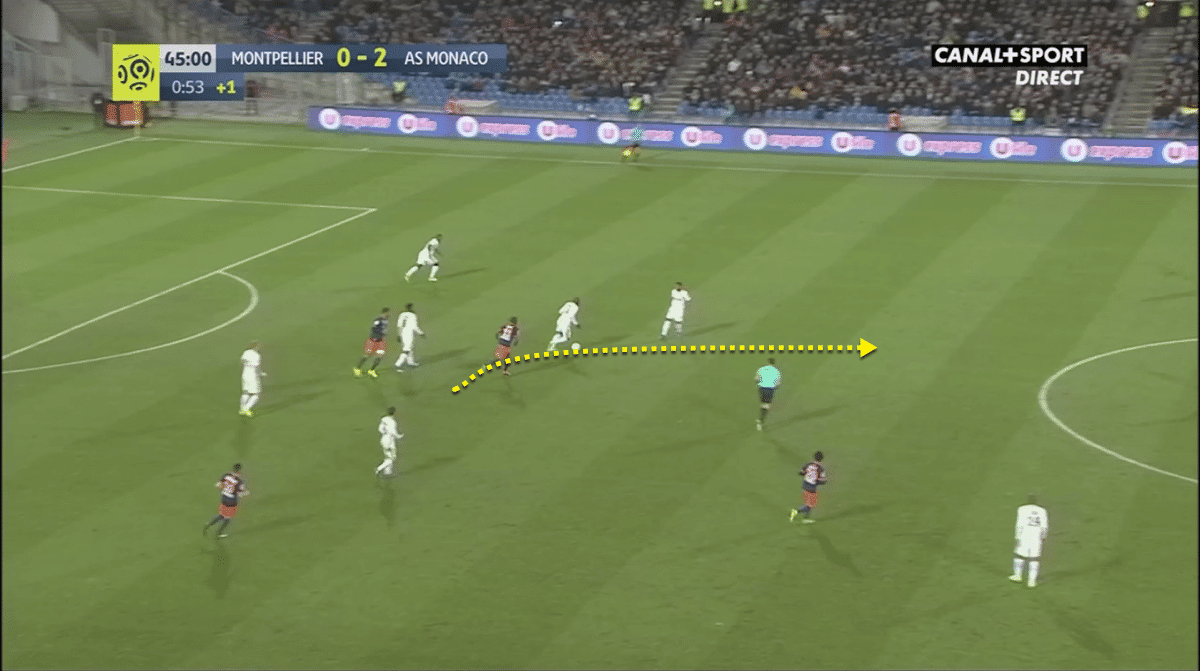 He then immediately looks to turn defence into attack, breaking forward into the vacant midfield space. 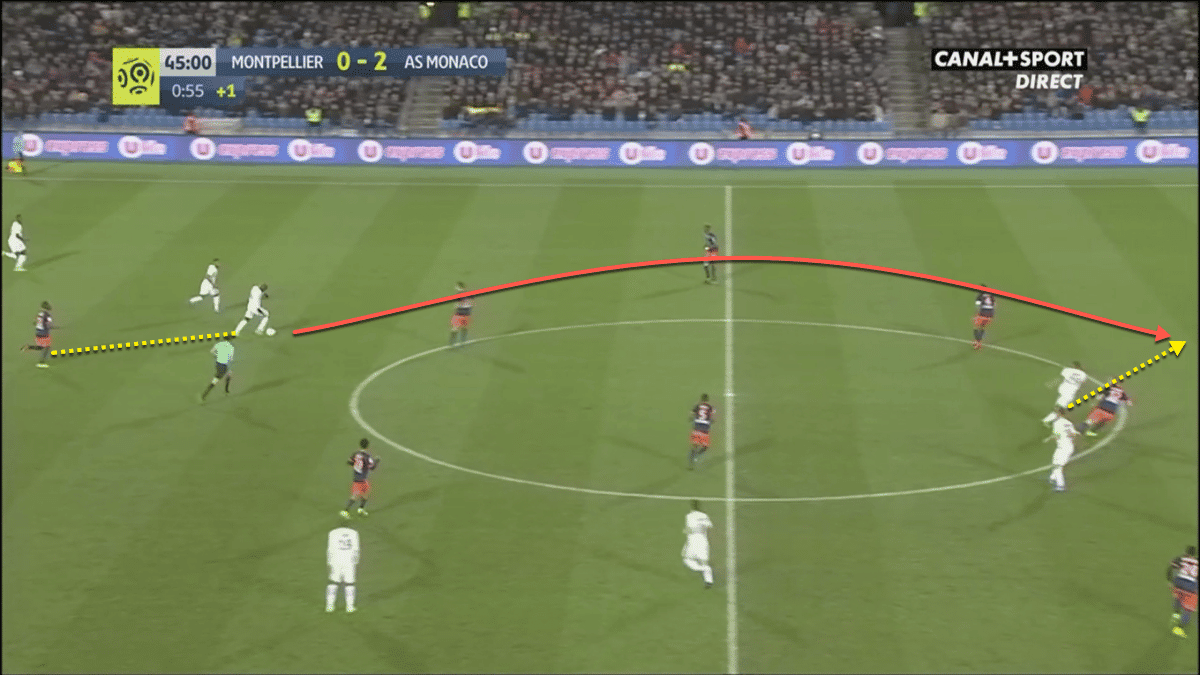 Showing incredible vision and execution, the one-cap France international identifies the forward movement of Kylian Mbappé and picks the Arsenal transfer target out with a wonderful, outside-of-the-boot pass to conjure a scoring chance. 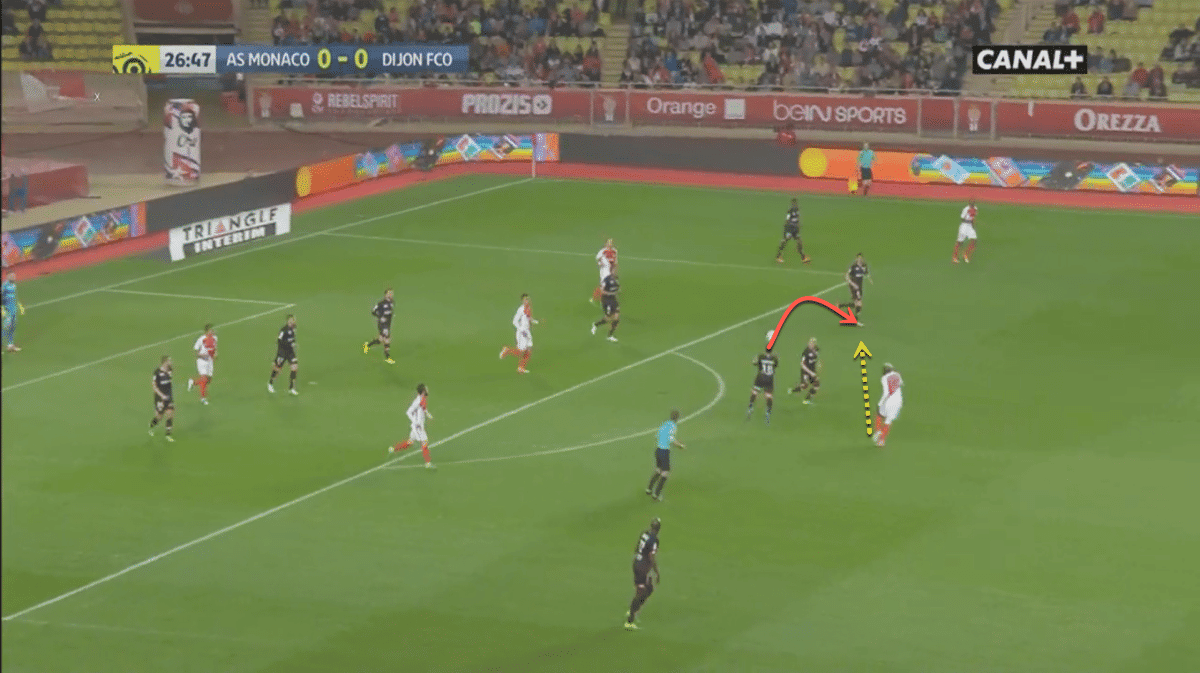 This time, against Dijon, the away side are looking to work their way out of defence but Bakayoko perfectly reads where the opposition player's errant header is going to fall. 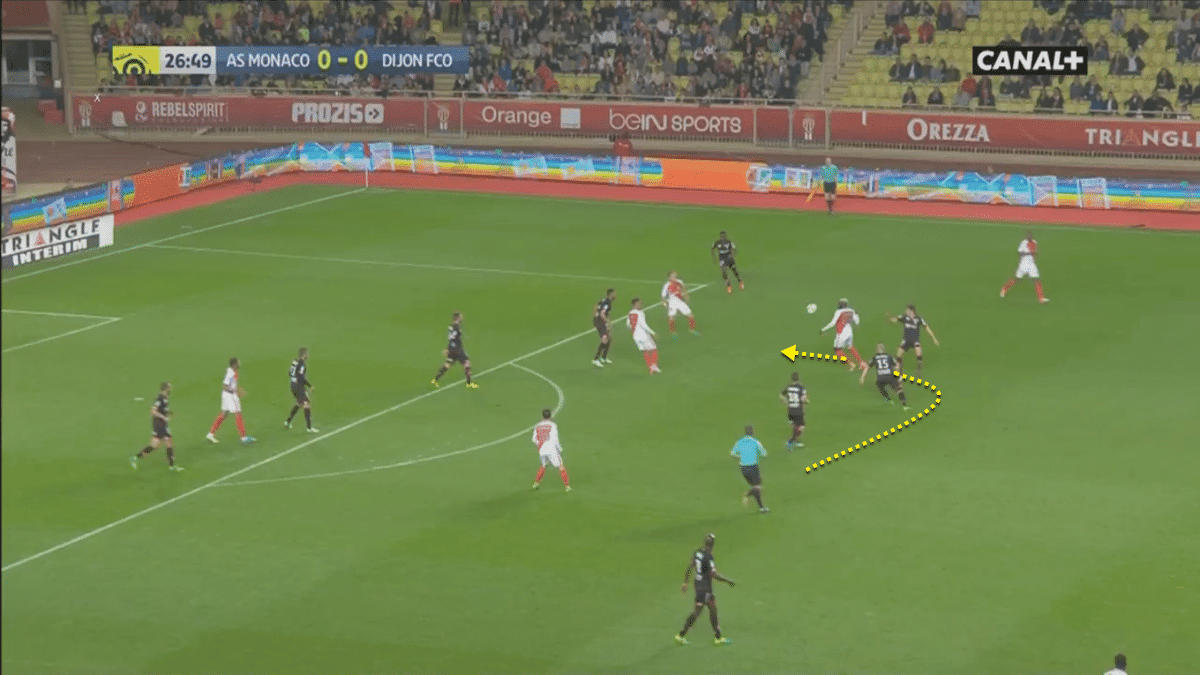 One step ahead of his opponents, he reacts quickly to intercept, again looking to capitalise on the out-of-shape Dijon midfield to exploit the space in front of the defence. 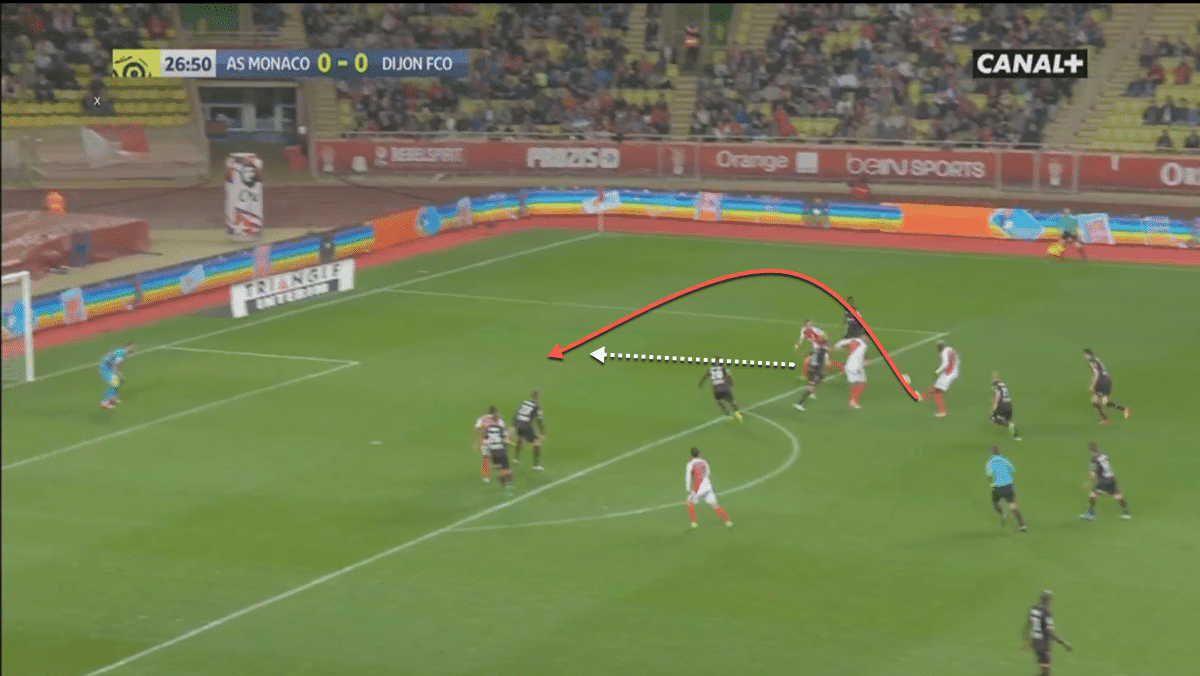 In a moment of inspired creativity, Bakayoko lifts a delicate pass into the path of Valère Germain, opening up a goal-scoring opportunity for his side.

But this desire to always keep things moving forward is both a gift and a curse, especially for a player in his position. With occasionally flawed decision making – again, a less than desirable train in a holding midfielder – Bakayoko can play himself into trouble at times.

The former Rennes youngster has a fine range of passing and the technique to switch play effectively with either foot, but he often risks a a difficult pass when a simple one will do.

Michael Carrick, United‘s deep-lying playmaker in chief over the last decade, also likes to be progressive in his play, but he evaluates risk superbly, something Bakayoko will need to refine. 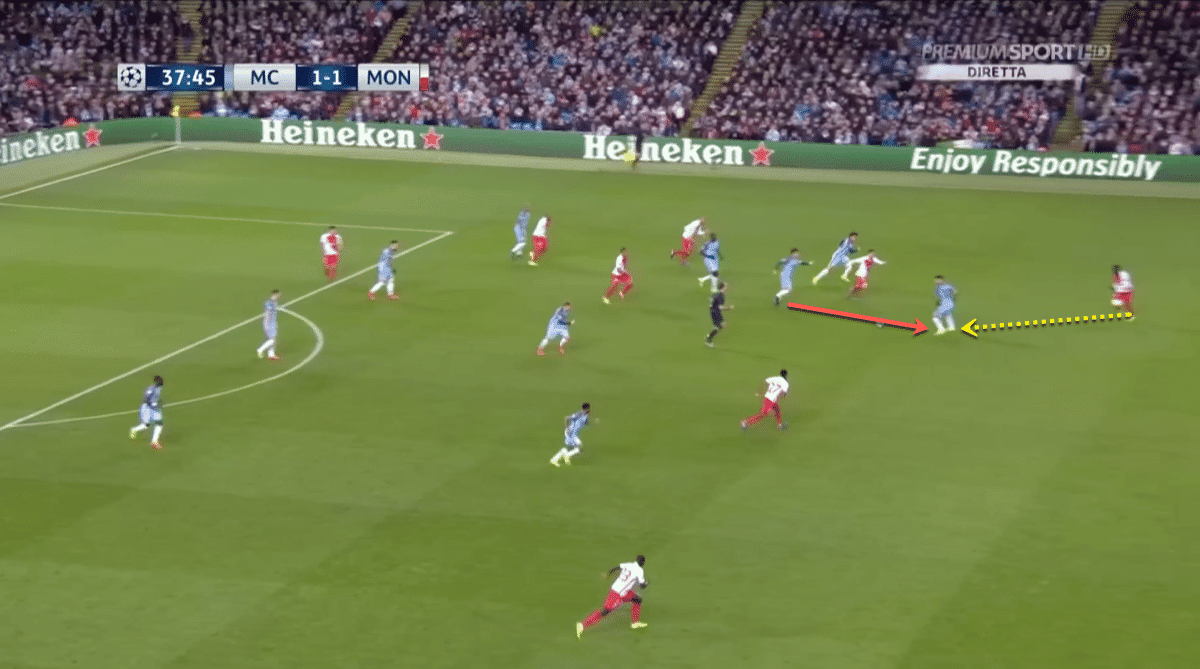 This time it isn't Bakayoko's risky passing that gets him into trouble against Manchester City in the Champions League, but his eagerness to push forward still proves ill advised.

He does brilliantly to win the ball as City build from the back, closing down Sergio Agüero before he has even received David Silva's pass and, as ever, cleanly winning the ball. 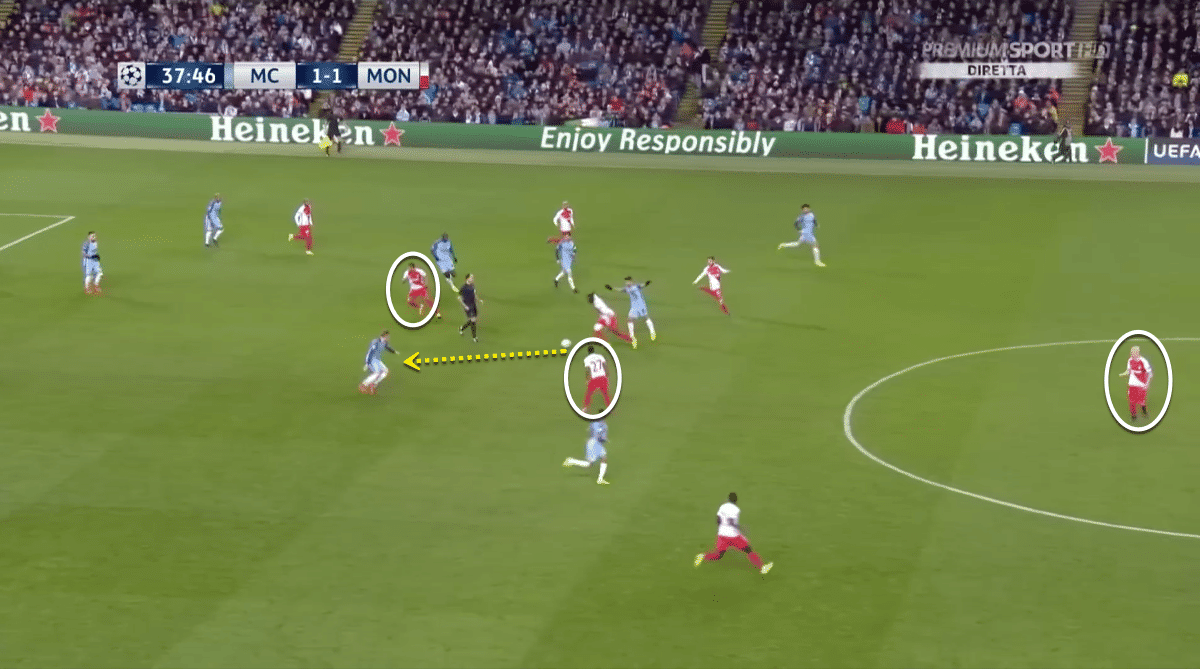 However, Bakayoko has simple passing options (circled white) which he ignores in favour of carrying the ball forward himself. 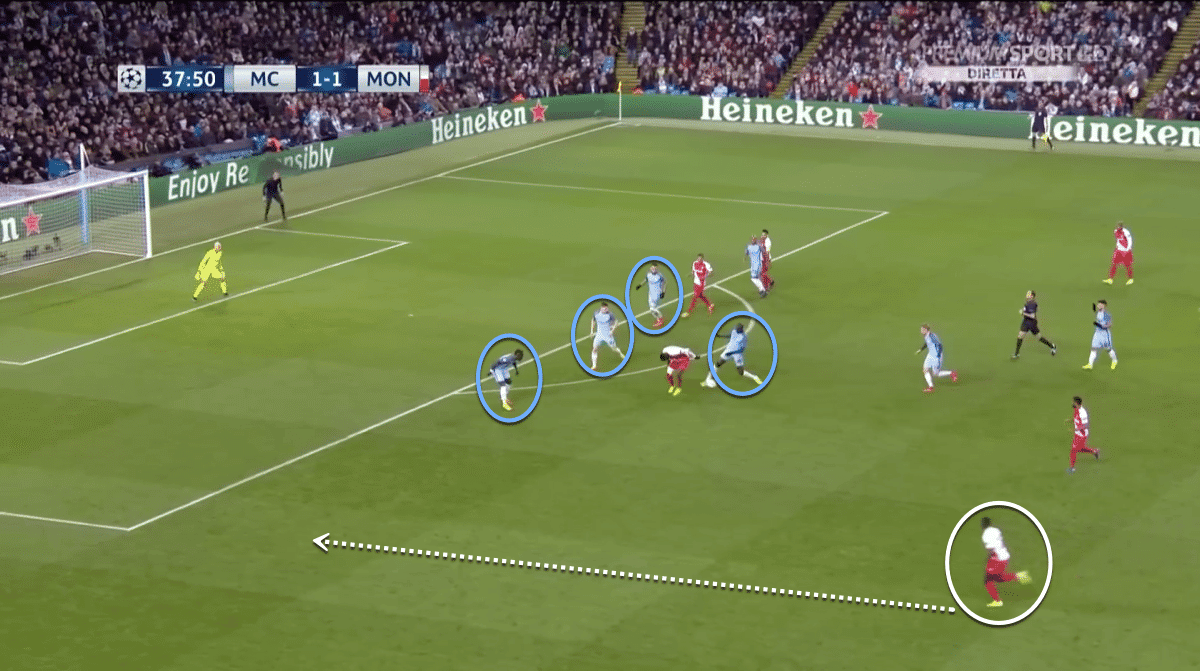 He ends up running down a blind alley where he is met by four City players (circled blue). Even then he has the option of playing in left-back Benjamin Mendy (circled white), but Bakayoko delays and is dispossessed, leading to him being caught upfield as the home side break.

This is the kind of decision making that would infuriate Mourinho, who made no bones about publicly criticising Luke Shaw for similar lapses last season.

However, Bakayoko has some redeeming qualities that the Portuguese boss would enjoy. Mourinho always likes his midfield to be well-stocked physically without sacrificing technical proficiency. The Monaco star puts a big green tick in that particular box. 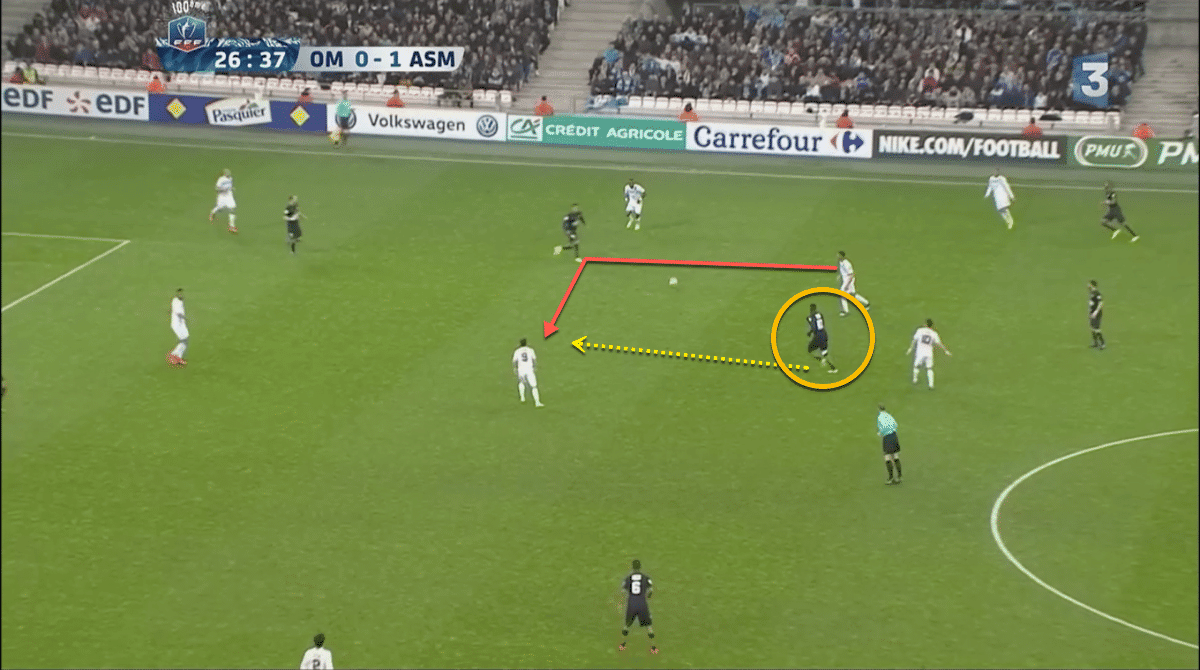 Here, against Marseille, Bakayoko breaks forward to latch onto a pass on the edge of the final third. 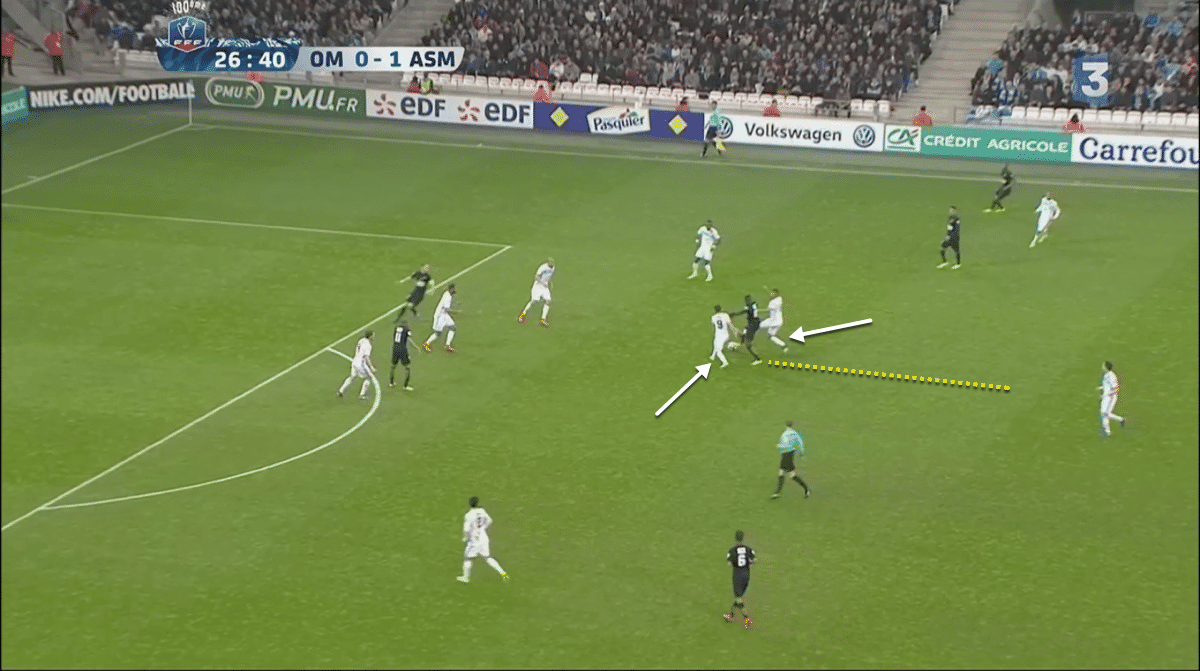 Immediately closed down by two opponents, he shows incredible upper-body strength to hold off both challenges, and continues to move forward through sheer force. 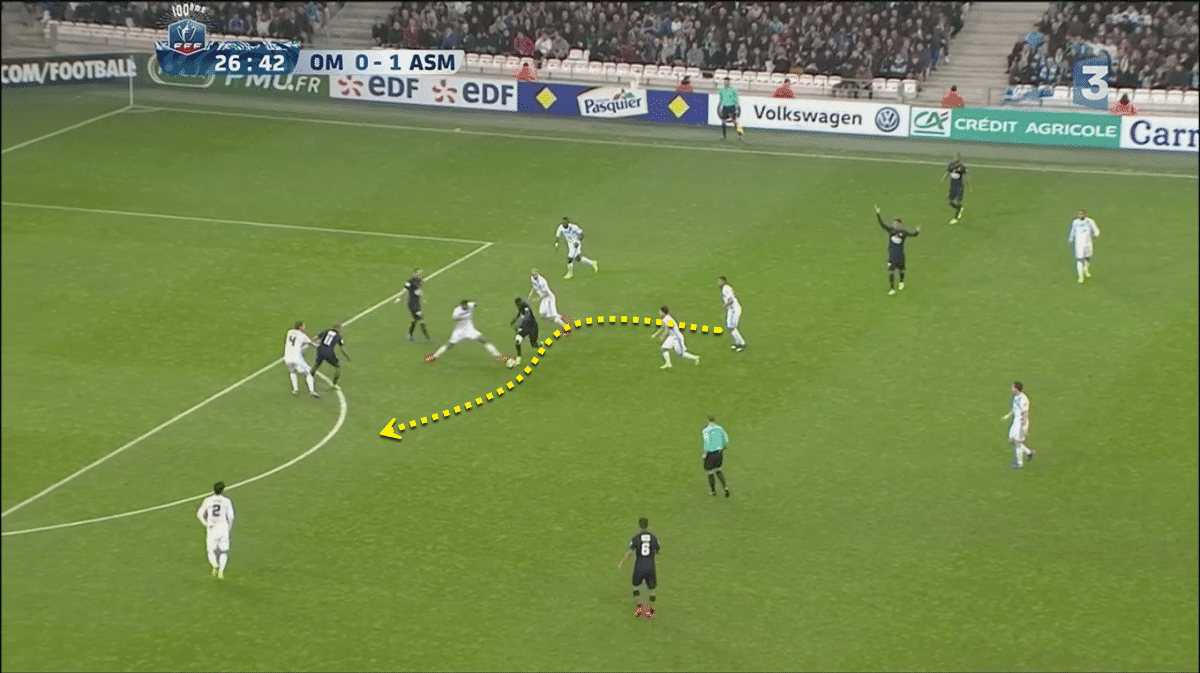 Then, met by another duo of OM defenders, Bakayoko demonstrates the subtly and finesse of his game by jinking through to the space which has opened up centrally, unleashing a left-footed strike at goal.

Whether or not Bakayoko has the ability to patiently and intelligently conduct play from deep remains a matter for debate, as it is not an attribute he has shown too regularly thus far in his career.

Indeed, with Monaco last season he made an average of 55.5 passes per 90 minutes in Ligue 1, whereas as Carrick and Ander Herrera – the two men who occupied the deep midfield role for United most often last term – averaged 76.2 and 70.9 respectively. 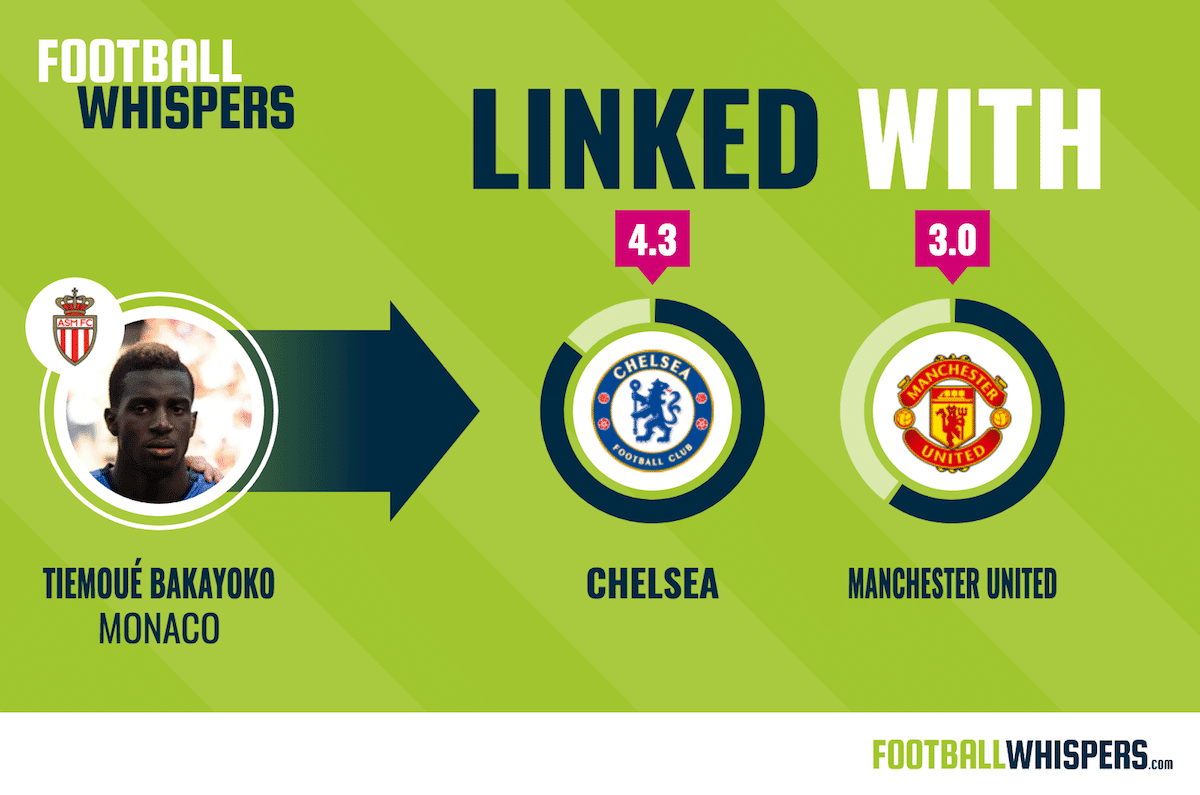 But Mourinho might not necessarily be looking for the same kind of playmaker this summer. The former Chelsea and Inter Milan boss has always preferred a defence-first destroyer to sit in front of his back four – think Costinha for Porto, Claude Makélélé in his first Stamford Bridge spell and Lassana Diarra at Real Madrid.

With his physical qualities and fantastic defensive instincts, Bakayoko, with a little tweaking on the tactical responsibility side of his game, could be just the ticket.

Yet he is not quite the perfect match for what United have traditionally had in the role or for what Mourinho might expect, and there are probably better options available — not least his current midfield partner. As enticing as it may be to get one over on Chelsea again, the Red Devils may be better served looking elsewhere.

However, the Frenchman represents a more attractive option than Dier or Matić, especially considering United have reportedly been quoted £50million and £40million respectively for the two. Available for a much more reasonable £35million, Mourinho could do a lot worse than Bakayoko.