Liverpool have been visited by ghosts of past transfer windows a number of times already this summer. The latest in the long line being Napoli midfielder Piotr Zieliński who, if reports are to be believed, came close to signing for the Reds almost exactly 12 months ago.

According to Il Mattino, Jürgen Klopp and his recruitment team, along with Tottenham Hotspur, have launched a bid for Zieliński. The report goes on to claim both clubs have seen their £25million bids rejected by the Serie A side with the club valuing the versatile midfielder at closer to the £60million mark.

It's highly unlikely the Merseyside club would part with such an amount of money just a year after passing up the opportunity to sign him for £11million. Many fans, however, will be asking whether it was a costly mistake to not land a player who was pictured wearing a Liverpool shirt or whether he has developed into a better player during his time in Naples?

If it's the latter then does it make sense for him to be a Liverpool transfer target yet again?

After all, a lot has changed for the club in the space of 12 months. The obvious difference being the change in system. Klopp near enough exclusively used a 4-2-3-1 system when in charge of Borussia Dortmund and used it at Anfield during his debut campaign there.

In that particular system it was difficult to see where Zieliński could be utilised effectively.

However, that was tweaked in the summer and he debuted a 4-3-3 system with a number of players operating in unfamiliar roles. Jordan Henderson was deployed as the deepest midfielder with both Gini Wijnaldum and Adam Lallana playing as box-to-box midfielders either side of him.

It's this change in system, and Zieliński's form for Napoli, which could be why the Reds once again have him in their sights.

Why Liverpool Should Target Zielinski Again

Blair Newman, the resident Serie A expert for Football Whispers, believes he'd be perfect in the Lallana role.

“For Napoli this season he's played on the right side of central midfield three. Sort of box-to-box, but much more creative than your average box-to-box.

“I don't know if he's improved individually (not enough to be valued at £60million). He was already very good, and it felt like it took him a while just to show what he's capable of and settle in last season. Maybe we'll see him take a step up in levels of performance next season now he's fully settled.

“He got gradually better as last season went on, to the point where he was often beating Allan to a starting spot. Pretty impressive.”

The Reds, who reportedly saw a bid for Lazio's Sergej Milinković-Savić turned down recently, are in the market for a midfielder. With a place in the Champions League group stages just two positive results away they need a squad with depth.

Far too many times last season one injury would mean a reshuffle which then had an impact on consistency and momentum. More often than not it was Emre Can tasked with plugging the holes throughout the midfield but if Klopp's men are to be contenders on all fronts they can't be papering over cracks like that again.

They need a number of players with similar profiles to be able to not only fill in but to play alongside one another too.

Lallana had his best form in red but injuries hampered him and the fluidity of the team. Bringing in a player with similar qualities would mean if he was to pick up a knock the dynamic of the team wouldn't dramatically shift.

It's perhaps why the three midfielders recently linked with a move to Anfield –Milinković-Savić, Naby Keita and Zieliński – have similar traits as players. 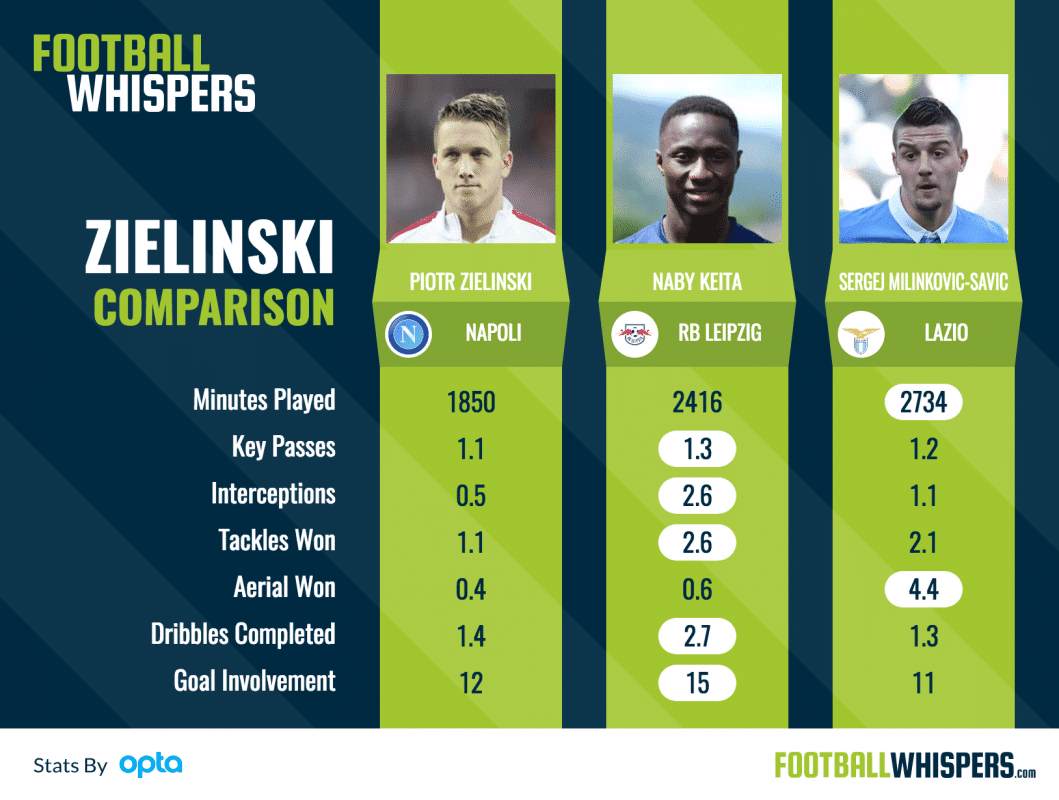 As previously mentioned, he initially found it difficult to break into the Napoli first-team having joined from Udinese in the summer. He did play his way into Maurizio Sarri's plans by the end of the campaign though.

He appeared in fewer minutes than Milinković-Savić but was involved in more goals (12 to 11). Key passes aren't too dissimilar and dribbles completed are on level with the Lazio man too. He does fall short, however, when looking at interceptions and tackles won.

This could be down to Napoli's style of play. They were utterly dominant and breathtakingly good going forward.

Based on these three midfielders being linked it wouldn't be too reckless to assume Klopp wants to add a another goal threat from midfield to his arsenal but who also has the capability of being able to dribble his way through the opposition – whether it be defensive lines or their press. Zieliński offers all of that. 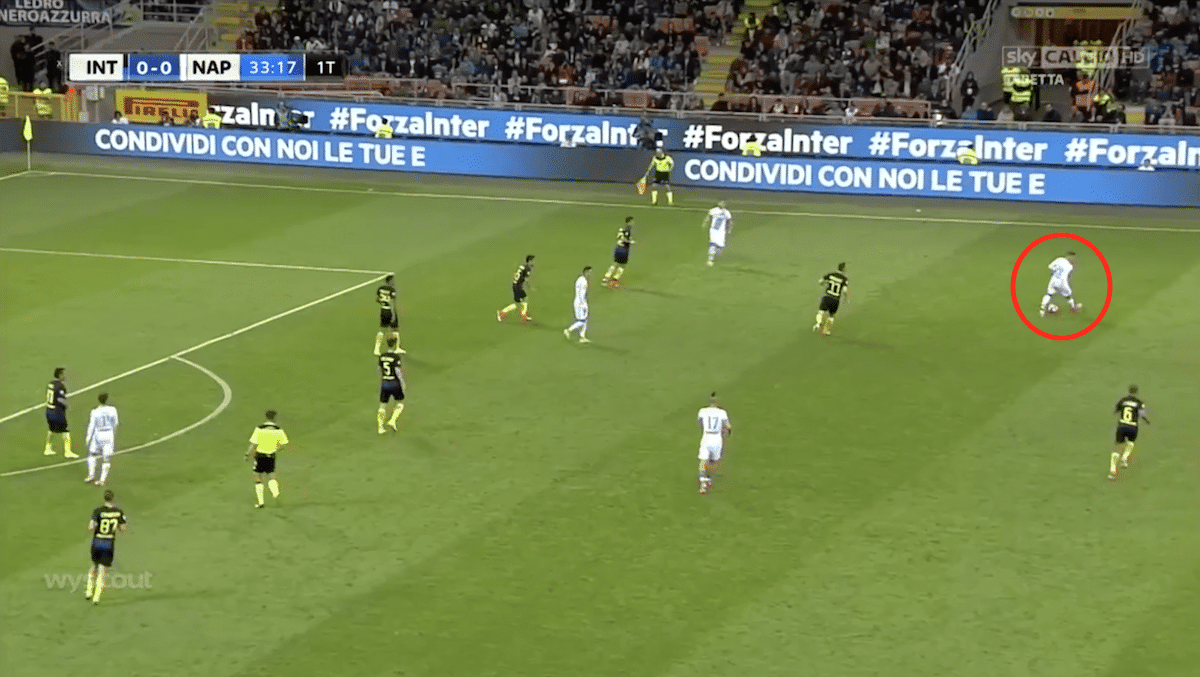 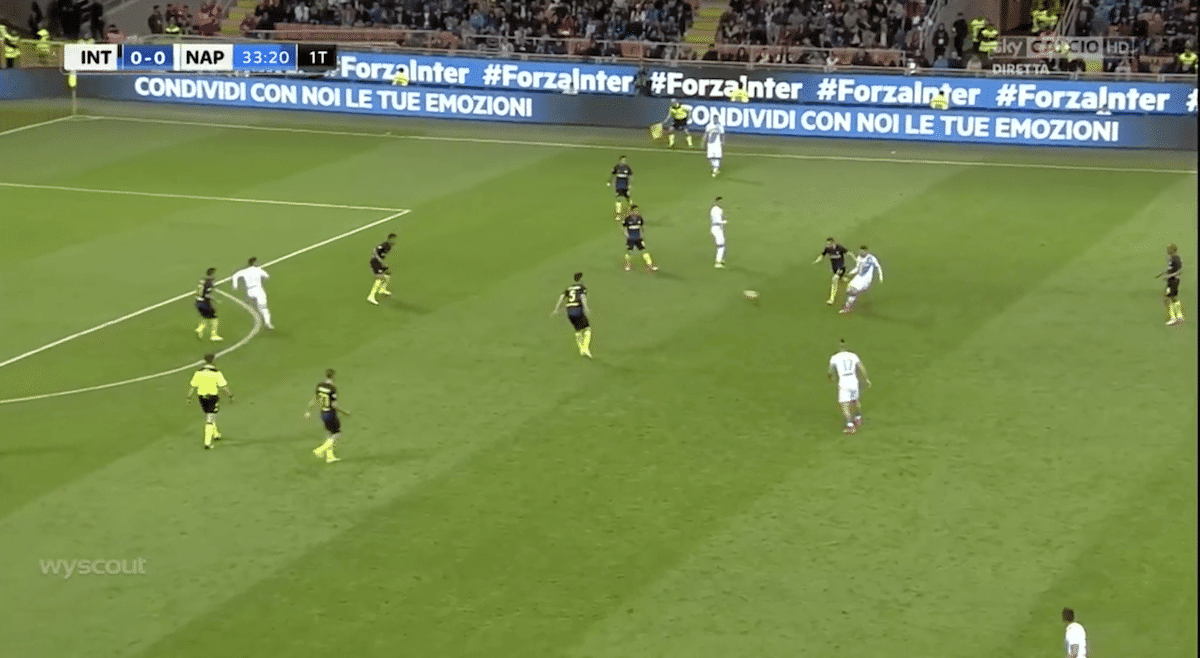 In the above two pictures you see Zieliński, circled in red, pick the ball up against Inter Milan with the home side having plenty of players back in defensive positions. It looks as though they're controlling the situation well and there's no room for Napoli to create anything.

However, the Polish international quickly goes through the gears, spinning on the ball and driving at the Inter team and, coupled with the movement from the attacker of the ball, is able to thread through pass which takes all seven Inter players out of the game.

His positivity on the ball creates that chance. There are safer passes on but he ignores them with his proactive approach. How many times did Liverpool lack that last season? 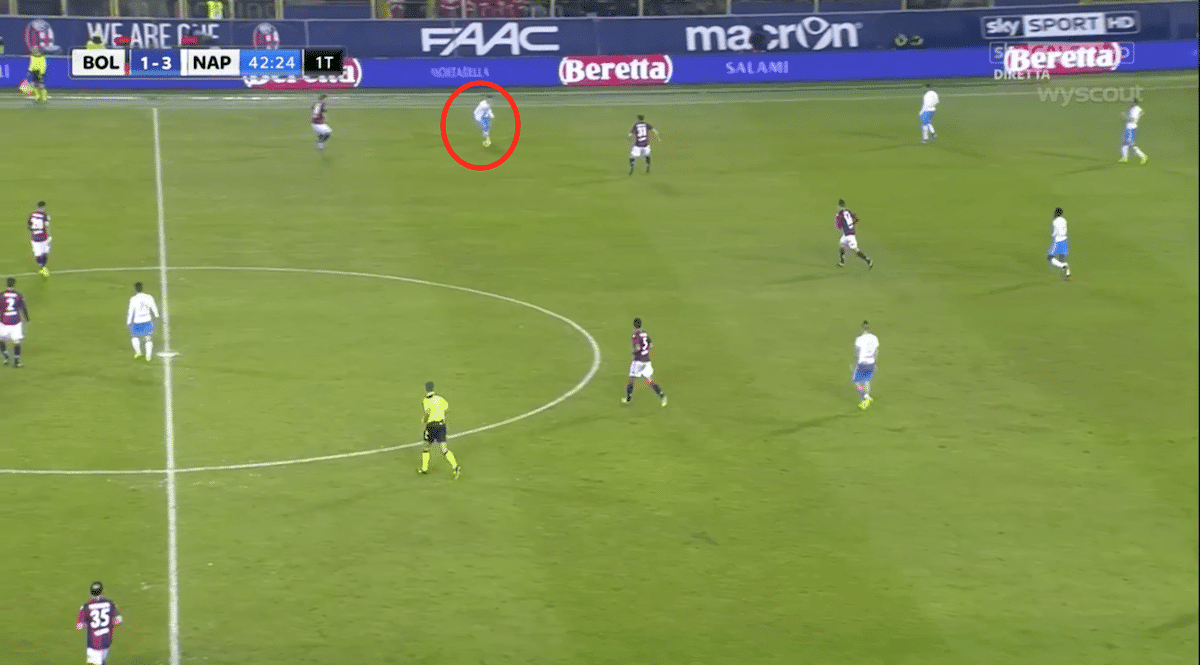 This time you get to see his dribbling ability. He picks the ball up in a wide right position and knocks it past two Bologna players before driving into the acres of space ahead of him. He makes the home side commit players and in turn creates the situation you see in the second picture. He then plays a pass and Napoli go on to score their fourth.

If the report is true and Liverpool are keen on him again it's clear to see why. He seems much better suited to the 4-3-3 system and with more games to play there's an increased chance of him being an important member of the first-team squad.