So far this transfer window Liverpool's two new arrivals have been attacking ones. Roma parted ways with Mohamed Salah and Liverpool convinced Dominic Solanke, a highly-rated youngster, to swap Chelsea for Anfield.

Attack wasn't the biggest issue for the Reds last season as Jürgen Klopp's team finished as the fourth highest scorers in the Premier League. However, the goal tally of 78 can be a little deceptive.

Before the turn of the year Liverpool were rampant. In all competitions from the start of the season to the match against Manchester City on New Year's Eve, they scored two or more goals in 17 matches.

2017 was a different story, though, and they only managed to add a further ten games to their total of 27 matches in which they'd netted at least twice.

For context, in the first half of the season the Reds averaged 2.42 goals a game. That would have seen them finish with 92 league goals over the entirety of a season.

The second half of the campaign saw them average just the 1.68 goals per game. And there is the problem.

While Liverpool are obviously in need of defensive upgrades the attack needed reinforcements too. Klopp has gone about his business to address the issues but is the German boss finished?

According to AS he isn't. The Spanish publication claims the Merseyside club are interested in Atletico Madrid attacker Ángel Correa.

Footmercato then released a report to suggest Liverpool have already offered the 22-year-old a five-year contract worth around £2.5million-per-year.

However, they then go on to claim the Argentina international is apparently after closer to £4million over a season.

The La Liga club are forbidden from registering players until January after a FIFA-imposed ban was upheld earlier this summer. Naturally Diego Simeone is wary of sanctioning a deal to sell Correa without being able to bring in a replacement.

But the Spaniards are said to be willing to part ways with the versatile Argentine in order to finance a move to bring Diego Costa back to the Los Colchoneros.

According to reports, £25million would be the magic number. It would see the Madrid based club turn a profit of close to £19million on a player they signed from San Lorenzo in the summer of 2014.

Correa is said to be frustrated with the lack of playing time afforded to him under Simeone and wants a platform to push on and appear regularly for his country.

You can see why, too. Last season he made 40 appearances for Atletico but 28 of those came from the substitutes bench. When you combine the amount of minutes he played in La Liga as well as the Champions League it equates to 16 full 90 minute matches.

Managing game time is one thing but to build momentum an attacker needs consistent game time and he's just not getting that in Spain.

And with Manchester United transfer target Antoine Griezmann now staying and Fernando Torres signing a new deal with the club it could be a similar story next season.

As many people know when Correa initially signed for Atletico he was being compared to their former striker Sergio Agüero.

Bullish in style, he was a real handful and an all-rounder in attacker. His performances in Argentina also drew comparisons to Luis Suárez and Carlos Tevez, too.

Correa's move to Spain nearly collapsed when his medical revealed a cardiac condition. However, the club went ahead with the deal even though he needed an operation.

He didn't make his debut until August 2015 but it's this comeback, and the desire he showed to get back to top flight football, which shows he's got that fighting spirit Klopp craves in a player.

After the former Borussia Dortmund manager's announcement as new Reds boss in October 2015, the Times journalist Jonathan Northcroft wrote about the bond Klopp has with his players; it sees them “run through brick walls for him, and inspires them with his loyalty.”

Correa, if reports are to believed, just wants an opportunity to impress and if Klopp gives it to him he'd have his loyalty instantly. Once under the German's spell and fully caught up with his demands, he could be quite the weapon for Liverpool.

Correa has operated in a number of roles for the Spaniards over recent seasons and is adept at playing as a wide forward as well as leading the line.

He could start in place of or alongside Sadio Mané, Roberto Firmino and new-boy Salah. Furthermore, his style would compliment whomever he'd be playing alongside. There aren't many in the current squad capable of doing so, not as effectively as Correa.

He's somewhat Firmino-light as a false-nine – which isn't something many players can stick on their C.V – and it's meant as a compliment. The Brazilian has his critics due to the fact he's not always the most prolific but Liverpool as a team look completely different when he's leading the line.

Without the Brazilian in that central role it can all look a little pedestrian. There's nobody in their squad quite as selfless as the former Hoffenheim man and the team benefit from what he does. 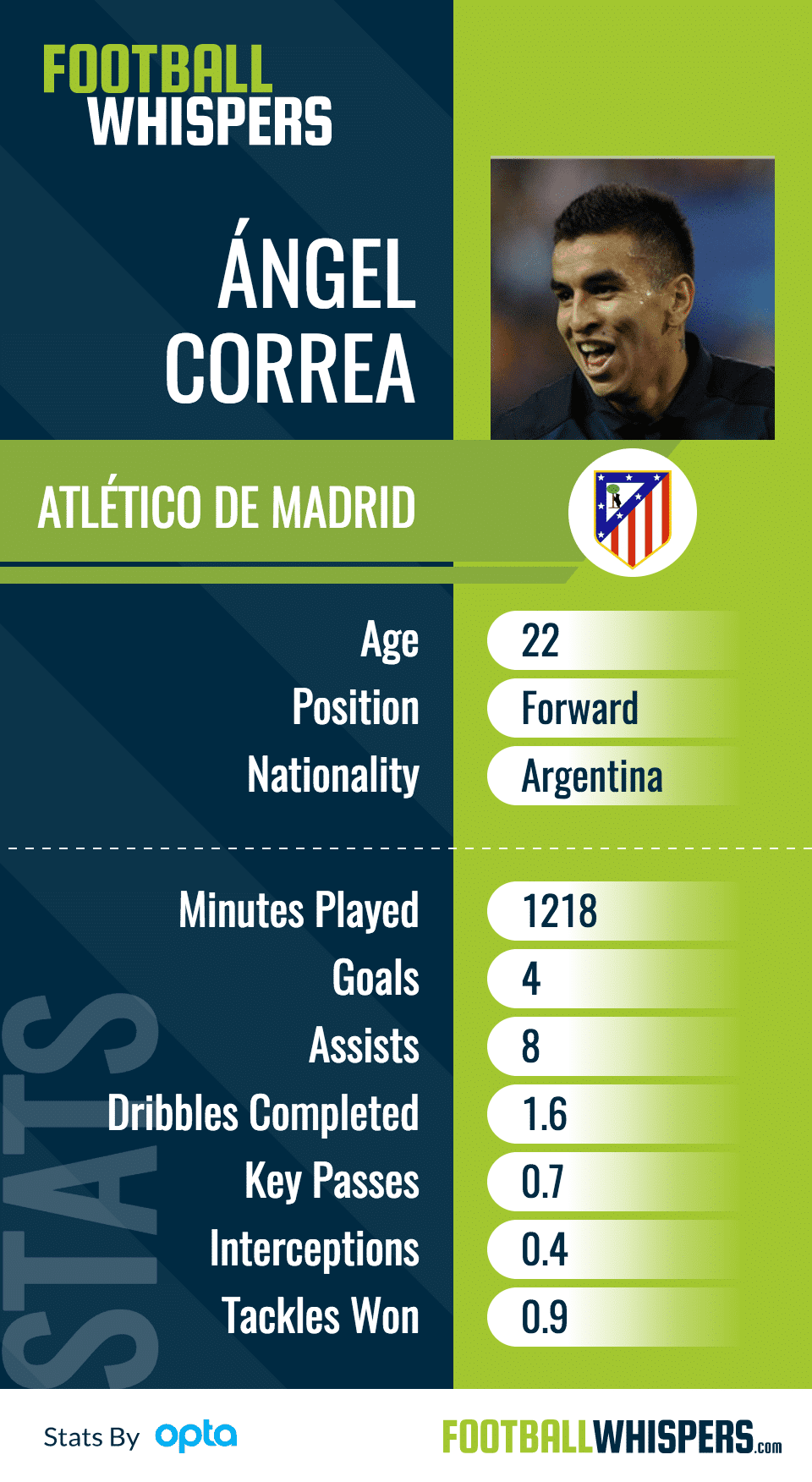 And Correa's limited game time means stats don't tell the whole story. An assist every 152 minutes is something to read into, though, and in a free-flowing Liverpool attack he could have quite the field day.

His determination is evident, his movement off of the ball shows his intelligence, he's fleet footed and creative  but it's his acceleration – the way he appears to dart everywhere – and those slaloming runs of his which make him a perfect addition to the squad.

However, it would mean one of Danny Ings, Divock Origi or Daniel Sturridge could be on their way out.

But when an opportunity presents itself like this and Liverpool are able to find a player who doesn't break the bank but, on paper, suits Klopp's style, they need to grasp it with both hands and add that quality to the squad.

Correa may not be a starter at Anfield but he's almost guaranteed to play more matches than he would with Atletico.