Celtic legends can be made in just one fixture; the Old Firm Derby. How a player performs against Rangers will often decide where they stand in the pantheon of the club’s heroes.

If a striker fails to score against the blue half of Glasgow, they can almost forget about building a legacy at Parkhead. Find the net and it's a very different story. And last Sunday Odsonne Édouard announced himself as the Bhoys' newest idol.

After going behind twice at Ibrox, the odds looked to be against Brendan Rodgers side when Jozo Simunovic saw red. The Hoops had to play with ten-men for over half an hour. It was a steep challenge, but one 20-year-old forward took on.

The French youth international, just moments after coming onto the pitch, received a pass on the left-wing. He cut inside onto his right-foot and curled a shot beyond Wes Foderingham. The goal gave Celtic the lead for the first time in the contest and eventually sealed a memorable win.

“He is one of the best young players I have worked with – his movement, his touch, his all-round play,” Rodgers told CelticTV. “He made himself a hero with the Celtic supporters, which is great for him.”

The goal, which was struck in front of the visiting Celtic fans, was Édouard’s sixth of the season. He also has two assists to his name, a strong return from just nine starts.

“He hasn't had a regular run,” Rodgers admitted. “But when he has played…well just look at his goals to games ratio.”

Édouard’s countryman Moussa Dembélé was named in Sunday’s starting line-up by Rodgers and although the 21-year-old netted the equaliser, it was only his seventh goal of the campaign, a figure way below the 17 he managed last term.

At the start of the January transfer window, it was reported by Sky Sports that Brighton & Hove Albion had spoken to the Scottish club about a potential £20million move.

The story was denied on both sides and no move materialised. However, it would be naïve to think other clubs won’t come in for the striker this summer.

Édouard, meanwhile, is only on loan from PSG and would return to the French capital this summer unless Celtic stump up the money to make the move permanent.

The soon-to-be Scottish Premiership winners have an option to buy for a reported fee of £7million.

“I do not think about what will happen next season,” the forward told France Football. “I'm having a lot of fun here at Celtic. It is an extraordinary club, with a superior coach and great fans.

“I want to focus solely on my football to help Celtic as best as I can for the remainder of the season.”

The powers at be at Celtic Park will have a huge decision to make in the summer: should they cash in on Dembélé and hand the reins over to the young pretender or stick with their tried and trusted No.10?

Statistically there isn’t too much to separate the two France youth internationals this season. Dembélé edges his counterpart in minutes played, but not by much. 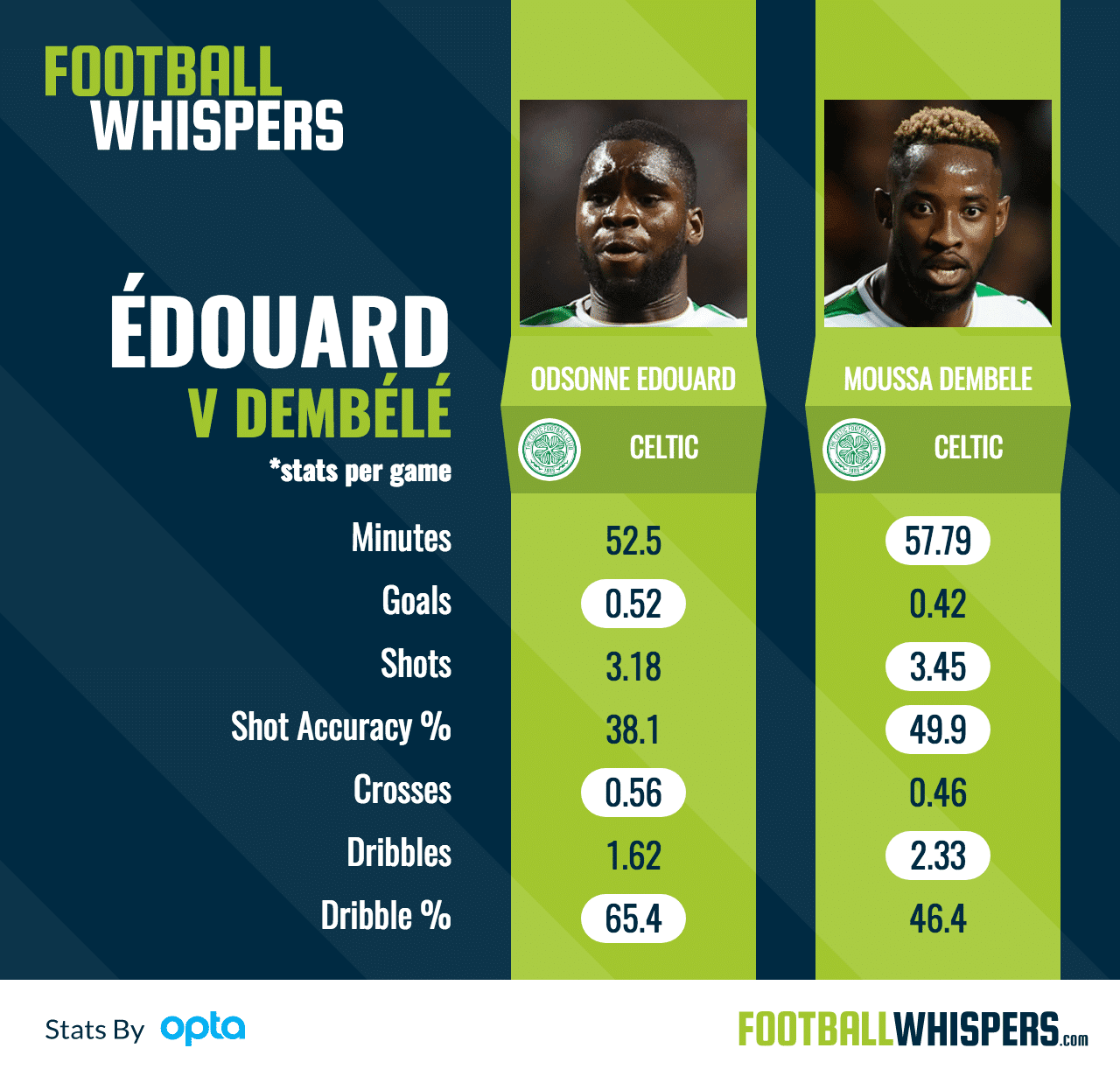 He does though take more shots and lands a higher percentage of them on target. Yet it’s Édouard who has a higher goals per game ratio at 0.51, just as Rodgers suggested. With more time on the pitch he could be an even bigger threat in the final third.

And while may not be able to match the former Fulham youngster in terms of attempted dribbles, down at 1.62 compared to 2.33, he completes a higher percentage. So he is more efficient.

In every category the PSG loanee is either just behind his team-mate or in front. With more game time and maturity, he could be replicate and surpass Dembélé over the next 18 months.

So rather than keep the 21-year-old and risk his value dropping, this would be the perfect time to cash in on the success he has enjoyed in Glasgow.

Le Foot in France recently reported Marseille were keen to restart their attempts to land Dembélé this summer.

Signing Kostas Mitroglou hasn't worked and the Greek forward has failed to find his feet and excel at the Stade Velodrome.

With qualification for the Champions League high on their priorities – they're currently third, four points behind Monaco in second – OM need upgrades across the attack.

The last time Marseille made the group stage they went out with six defeats and zero points. As the biggest supported club in France, they can't risk a repeat.

The appeal of bringing in a top French talent, someone who has the star-power and potential to help them close the gap to PSG, would be more than enough to convince American owner Frank McCourt that he should be willing to match Celtic’s demands.

Anything above £20million would be more than enough to help the Bhoys seal a £7million deal for Édouard, and it would ensure they have a potential superstar leading the line for at least the next couple of years.