Signed for £400,000 from the French second tier in January 2014, a Premier League winner and PFA Players' Player of the Year in 2016, Riyad Mahrez's unique and remarkable time at Leicester City appears to be coming to an end.

As one of the stars of the Foxes incredible title triumph two seasons ago, the France-born Algeria international was one of the hottest properties in last summer's transfer market, but Leicester managed to hang onto their gifted winger amid reported interest from Arsenal and Chelsea.

Mahrez has since, however, released a statement signalling his intention to depart the King Power Stadium, and is said to be attracting interest from Chelsea, Arsenal and Barcelona on deadline day.

“Out of the huge admiration and respect I hold for Leicester I wanted to be totally honest and transparent. I have informed the club that I feel now is the time for me to move on,” read the statement, confirming his desire to seek pastures new.

“I've had the four best seasons of my career at Leicester and have loved every moment,” Mahrez continued. “I feel immense pride to have been a part of what we have achieved during my time at the club, culminating in becoming Premier League champions.

“The relationship I share with the club and our amazing fans are something I will treasure forever and I truly hope they will understand and respect my decision.”

A year ago, Leicester could have cashed in on Mahrez for as much as £40million, with the former Le Havre winger coming fresh off of the best season of his career.

Now, though, there may be less of a market for his signature after a disappointing campaign. But would he still be a good addition for Arsenal?

Mahrez for Sánchez or Özil?

Arsène Wenger's future may no longer be the topic of debate after the French manager signed a two-year deal to remain in charge at the Emirates Stadium. But there remains a huge question mark hanging over star players Alexis Sánchez and Mesut Özil's ongoing commitment to the club.

Both will be out of contract at the end the season and look unlikely to with the Gunners much longer. The general feeling is that Sánchez will leave, with  Manchester City hot on his tail, while Özil may opt to see out the final year of his deal and leave Arsenal for free in a year's time.

If either or both of the Arsenal attacking pair are to move on, that would bring about the need for Wenger to take to the market to replace them with wide attacking players of not only excellent ability, but who also have the kind of name recognition that would appease fans.

An in-form Mahrez would tick both of those boxes, but an in-form Mahrez has been seen only sparingly over the last 12 months, begging the question of whether he is experiencing a dip from his usual level, or whether 2015/16 was an anomaly. In the graphic below we see his form since the title winning campaign. 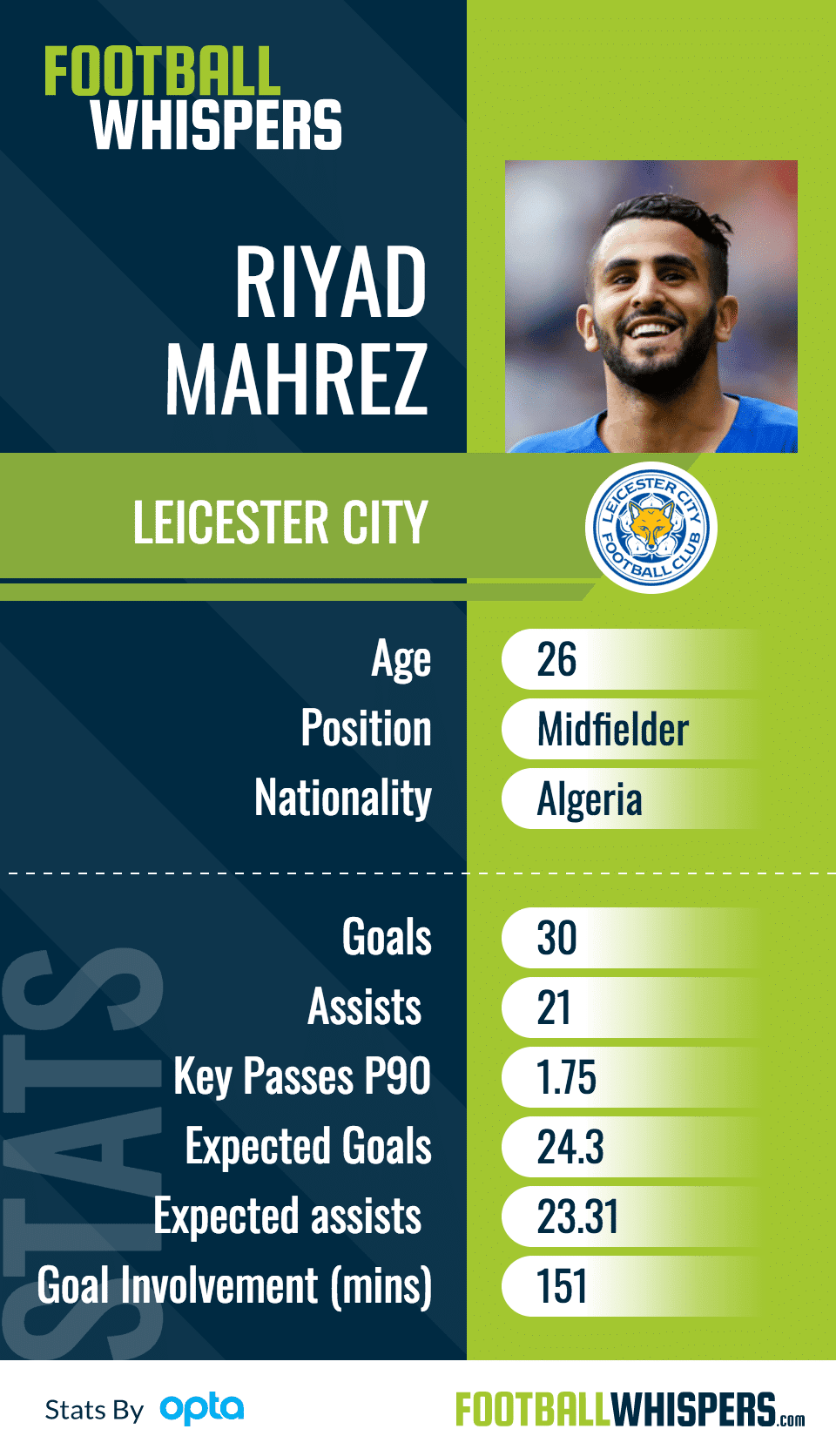 Stylistically, with Arsenal having enjoyed a tremendous run since switching to a 3-4-3 formation until recently, Mahrez could be the perfect fit for one of the wide attacking positions.

Used to playing on the right of midfield in a 4-4-2 system at Leicester, the Foxes have always had to make tactical allowances for the 26-year-old, ensuring that his flank is sufficiently covered defensively as his positional discipline can leave a lot to be desired.

However, as part of an attacking trident in 3-4-3, this would be far less of an issue, and Mahrez would benefit from greater freedom, less encumbered by a defensive workload for which he is unsuited.

Ideally, he would slot into the right inside-forward position which Özil has occupied, but the German appears more likely to remain at the Emirates than Sánchez, so Mahrez may have to adapt to playing on the left.

Regardless, his pace, dribbling ability and creativity could see him become a real threat to oppositions' goals, benefitting from a more advanced starting position than he is accustomed to in the East Midlands.

However, the issue of the Algerian's form last season is one that cannot be ignored. His productivity, compared to the title-winning campaign, has reduced dramatically.

In 2015/16, he scored 17 league goals and registered 11 assists, meaning he was directly involved in a goal every 109.21 minutes on average. Last season, he returned just six goals and a paltry three assists, and directly contributed to a goal every 315.22 minutes.

Having thrilled with his tricks, flicks and flair down the flank during the Premier League-winning campaign, Mahrez averaged 3.9 dribbles and two key passes per 90 minutes — those averages dropped to 2.5 and 1.6 respectively last term.

This can, in part, be explained by a couple of factors out of the player's control. Firstly, Leicester's loss of N'Golo Kanté, who joined Chelsea for £32million last summer, severely affected their ability to plug gaps defensively and recover possession. This made the Foxes more easily dominated in the middle of he park, and the supply to the attackers would have been impacted.

Also, it seemed to be the case that Premier League rivals had come to figure out how to play Leicester: defend deep, operate with a low-block pressing structure and deny them space to counter. With a reduction of space in behind for both himself and striker Jamie Vardy to burst into, Mahrez was understandably less effective creatively.

It could well be the case that a move to a new club, surrounding himself with a higher calibre of team-mate, could be just the tonic to revitalise Mahrez.

Although his value has potentially dropped since last summer, the continual inflation of the transfer market may yet see Leicester recoup a similar fee to that which that would have expected a year ago, especially if they are considering a sale to a Premier League rival.

But with less competition and the possibility of negotiating a better price based on his form last season, picking up Mahrez now could be a very astute move. After all, he is still relatively young, and the flashes of his old self that he showed in the Champions League alone last term seem to demonstrate that he is far from a busted flush.

There would certainly appear to be more risk involved now that there would have been a year ago, but Arsenal moving for Mahrez has the potential to be a transfer market masterstroke.