It's official: Milan have a new head coach. It's hardly a new position for the Rossoneri but this one really grates.

Short-termism has been Milan's M.O for too long now. But even by their standards, sacking Giampaolo after seven games and 111 days, making him their shortest-serving coach ever, takes some going.

And it's fair to say the club's Curva Sud Ultras were not impressed, releasing a strongly-worded statement to condemn the club's decision.

“Every time we think that we’ve hit rock bottom, the situation precipitates even more. We supported the new project of young players, accepting with a heavy heart the fact we wouldn’t see top players arrive, at least for the moment. 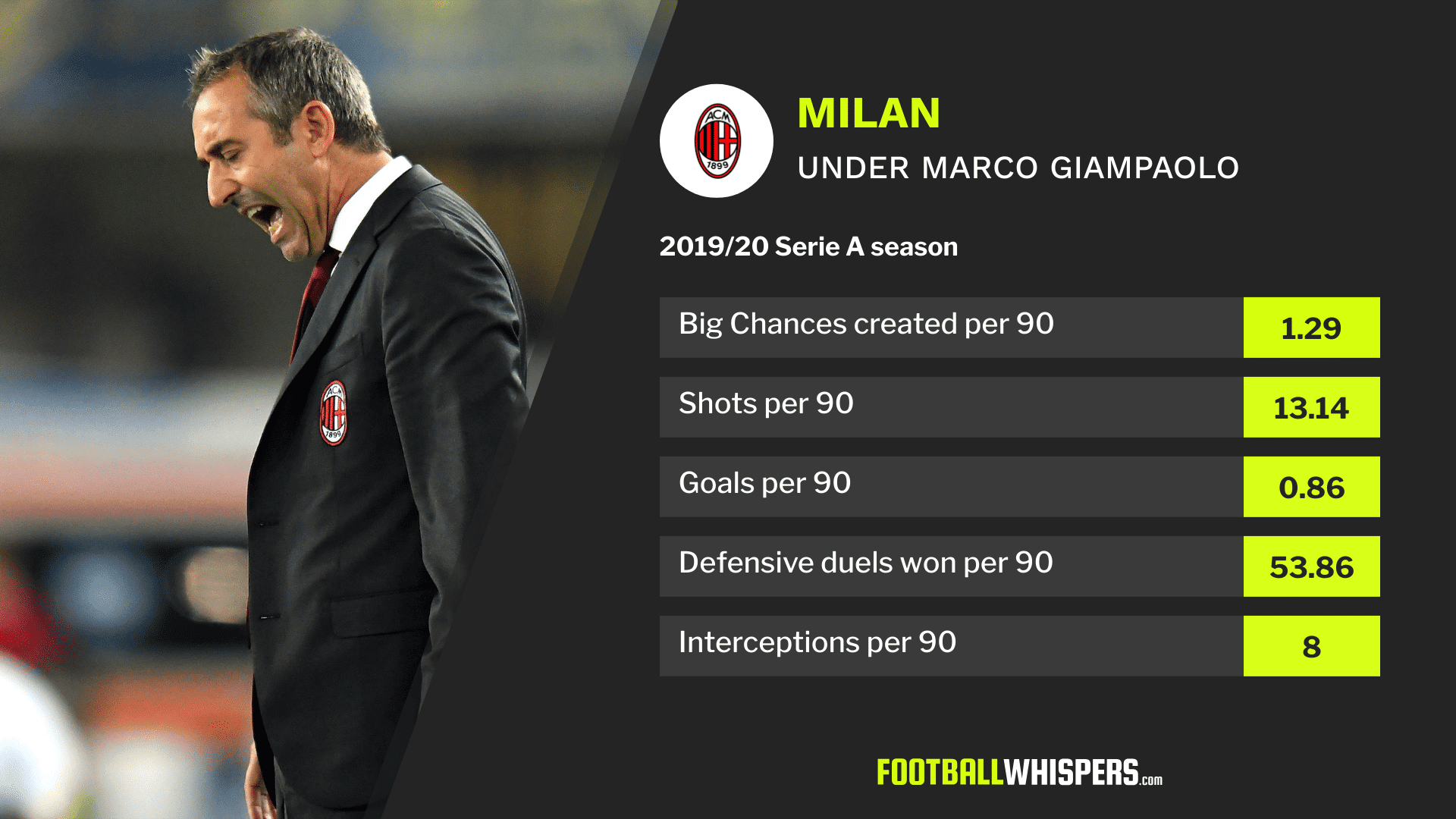 “We watched, stunned, the failed Giampaolo era, a choice strongly backed by the current directors only to be thrown out the window after not even three months of work (quite rightly).

“Rossoneri fans are fed up of being taken for a ride. We do not deserve that and we will never again accept this undignified spectacle!”

So it's back to the drawing board for a club that have had more changes of direction than a cab driver in the last decade.

Except it's only a matter of months since the last change. Accepting their place in the footballing hierarchy has been hard for Milan, a club with seven European Cups and 18 Serie A titles on their honours list.

But this summer, at the behest of Elliot, the hedge fund which now runs the club following Li Yonghong's failure to keep up with loan repayments, they appeared to do just that.

Their focus in the transfer market switched to hungry young players with the aim of eventually selling them on at a profit.

In came eight players at a cost of €111million, the oldest of which were forward Ante Rebić and midfielder Rade Krunić at 25. The average age of their recruits was just 22, though. This was a plan to return Milan to Serie A's top table. But just seven games into the new campaign it lies in tatters, Giampaolo out of work and a new coach in situ.

Things had not gone well for the former Sampdoria coach. In his brief spell at the helm, his side had averaged just 0.86 goals per 90, the third-lowest in Serie A, as well as taking the third-fewest shots on target (3.14) and creating just 1.29 Big Chances per 90 – good enough only to rank 13th.

It's fair to say Giampaolo did not help himself in some aspects. After the dismal opening-day defeat to Udinese, he abandoned his 4-3-1-2 system in favour of 4-3-2-1. That only lasted a little longer before, in the final two games of his tenure, returning to the 4-3-3 shape utilised by predecessor Gattuso.

That was all well and good and Gattuso had achieved relative success with that set-up. But certain selections left Rossoneri fans scratching their heads.

Lucas Biglia, at 33, is not the physical force he was once was and lacks the mobility to play at the base of midfield. Hakan Çalhanoğlu, meanwhile, has failed to ever get going at San Siro and his inclusion, ahead of the impressive Lucas Paquetá, was a bone of contention. 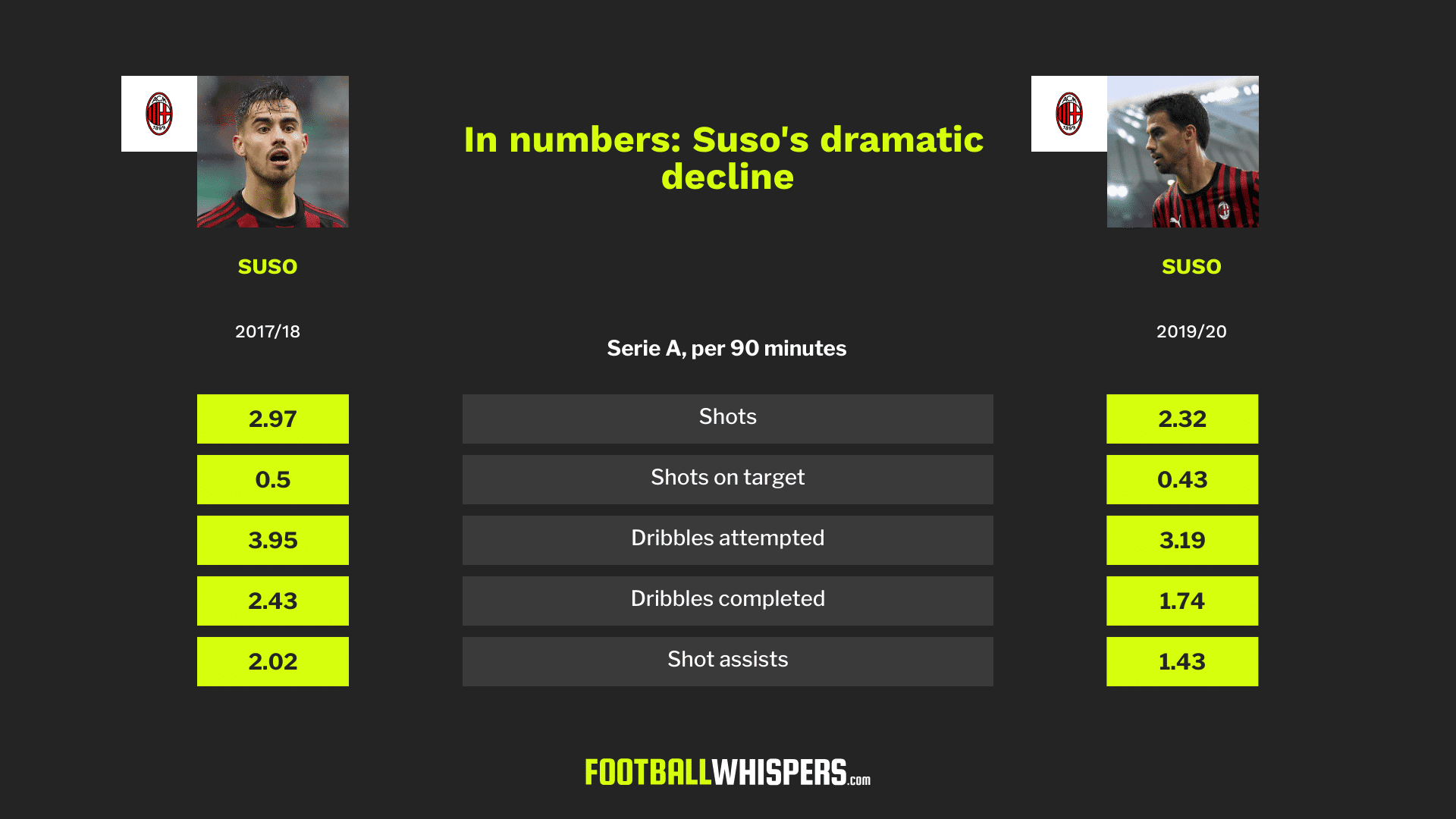 Further forward, Suso has been woefully short of form for some time, yet was still preferred to the more impressive Rafa Leão.

The Spaniard's attempted dribbles have fallen from 3.95 per 90 to 3.19 with completed dribbles falling from 2.43 to 1.74. There's also been a dramatic decline in the number of touches the former Liverpool youngster takes in the penalty area, falling from 4.17 to 1.59 per 90.

He wasnt't the only player to suffer under Giampaolo either. Krzysztof Piątek struggled to recapture his remarkable form of last season, scoring just twice in seven games, but given the lack of chances Milan created that does not come as a huge surprise.

A change of coach was inevitable. Though the whole episode has been handled clumsily. The Italian press initially reported Giampaolo would be removed from his position if Milan failed to secure a result against Genoa on Saturday before doing a 180.

In the end, they were right the first time. Saturday's 2-1 win at the Luigi Ferraris proved to be the dramatic final act of Giampaolo's short-lived reign. A last-gasp penalty save from stand-in goalkeeper Pepe Reina preserved the win as four players saw red.

What followed was an undignified mess. Milan's primary target for the role was former Internazionale and Roma coach Luciano Spalletti. The 60-year-old was sacked by the Nerazzurri at the end of May despite delivering Champions League football for the second season in succession.

However, complicating the issue further still was Spalletti had only signed a contract extension until 2021 in August last year. As is customary in Italy, Inter have kept their former coach on the payroll, instead of paying out his full compensation package, and Milan, therefore, had to reach a financial settlement with their rivals in order to appoint Spalletti.

That extraction price was initially quoted at around €15million and although Spalletti was happy to waive a large chunk of the money he was owed, Milan still baulked and switched their focus to Pioli, another former Inter coach.

However, technical director Zvonimir Boban, who has come under scrutiny for his part in Piolo's appointment, insists the former Fiorentina, Lazio and Bologna tactician was the club's first choice.

“I’m not talking about Spalletti, a very good coach. Our choice was Stefano Pioli,” Boban told a press conference to unveil the 53-year-old. “It’s normal that many free coaches were on our shortlist, but we focused on Pioli, a coach who knows our club and Italian football.

However, it's hard to look past Pioli being the cheap option. A vastly experienced coach with a career of more than 16 years, his record is, at best, mixed. An overall win percentage of 37.08 per cent is nothing to write home about and he has never lifted a major honour as a coach.

With the way things have been going at Milan, he's unlikely to buck that trend at San Siro.