Shkupi thrashed Lincoln Red Imps in the first leg leaving them a mountain to climb. Surely they won't be able to, will they? Find out with our Lincoln Red Imps vs Shkupi match preview with free tips, predictions and odds mentioned along the way.

To be fair, Lincoln Red Imps have enjoyed the better run of form between these sides; they have 13 wins in their last 14 games, with one loss in their last 19 games. However, that loss came at the hands of Shkupi in their previous match; although Lincoln Red Imps had a one-man advantage with almost 40 minutes left on the clock, they couldn't score a single goal. As a matter of fact, Shkupi scored their third goal despite being a man down. Although Lincoln Red Imps are playing at home, we are making the prediction that Shkupi will complete the sweep here.

Despite not scoring in their previous match, Lincoln Red Imps have scored a lot of goals recently; they found the net in 18 of their last 19 games, with three goals scored on average in their last six games. Because of this, Lincoln Red Imps have had a lot of high-scoring games; as all of their last seven games went above the 2.5 goal mark. In like manner, Shkupi have had their fair share of high-scoring games; their last four games have seen three goals scored on average, with three of those games going over 2.5. On that note, we should expect some goals in this match.

Can the Lincoln Red Imps pull of a miracle comeback?

Lincoln Red Imps always had their work cut out in this tie but they would have hoped to still be in the tie as they brought Shkupi back to their home ground. At 3-0 it's not completely over but it would be an almighty turn up for the books should the away side not ease through.

Lincoln Red Imps are coming off a disappointing 3:0 loss at the hands of Shkupi; prior to that loss, they had 13 wins in a row, with no losses in their previous 18 games. Lincoln Red Imps will hope to bounce back from that loss as they host Shkupi in the reverse fixture of that tie; will they be able to overturn a three-goal deficit?

Shkupi impressed with a comfortable 3:0 win in the first leg of their Champions League qualifying match; although they played short-handed for about 40 minutes, Goce Sedloski's men managed to keep a clean sheet. Shkupi will pay a visit to the Victoria Stadium in Gibraltar on Tuesday; they'll be eyeing their second win in as many games.

A quickfire FAQ on Lincoln Red Imps vs Shkupi 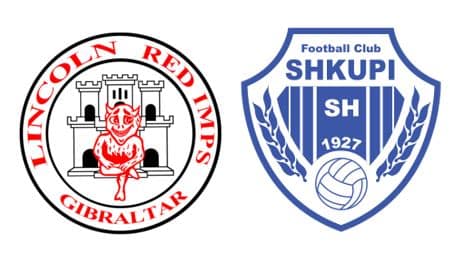