Shenzhen and Beijing Guoan meet to contest a Super League fixture on Monday, July 11th. Beijing Guoan are unbeaten in eight games ahead of this weekend’s game. Read our free predictions and find the latest odds for the fixture below in our detailed match preview.

Can Beijing Guoan topple Shenzhen for the second time this season when the teams meet in the Super League on Monday? Read our top three predictions for this week’s fixture below.

Beijing Guoan take an eight-match unbeaten run into Monday’s game and though three of their last four games ended all square, the Imperial Guards should be able to rediscover that winning feeling this weekend. Beijing thumped Shenzhen 4-1 in what was one of their best dialysis of the campaign so far back in June and with that performance still relatively fresh in the players’ minds, a similar result looks possible on Monday.

Beijing’s numbers in the final third have been relatively modest this term, however, they managed to notch nearly 30% of their entire tally for the season in one sitting when they hammed Shenzhen 4-1 last month. Shenzhen were unable to cope with Zhang Yuning that day and with the in-form striker in tow again on Monday, we’re tipping Beijing to find the net at least twice again.

Top Betting Odds and Stats for Shenzhen vs Beijing Guoan

Find our list of the best stats for Monday’s contest below alongside a tool to help you choose the best odds.

Read all of latest team news and injury updates for Monday’s Super League encounter between Shenzhen and Beijing Guoan below.

Romain Alessandrini and Mubarak Wakaso are both still out for Shenzhen and neither player is expected back before Monday. Lee Jan-Soo's side snapped a four-game winless run with a 2-1 triumph over Cangzhou Mighty Lions on Thursday and climbed up to 8th place as a result.

Samuel Adegbenro and Li Ke are in the treatment room this week, while Jin Pengxiang is considered a doubt. Beijing Guoan were held to a 0-0 draw by Meizhou Hakka on Thursday, though they did manage to extend their unbeaten surge to eight games. 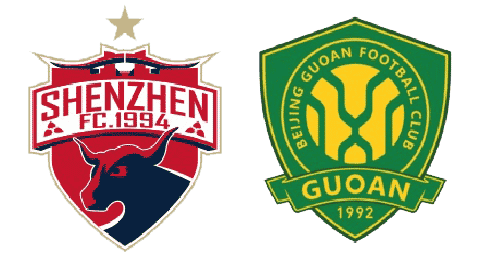