“I know you’ve got all the tools to play for me for the next ten years,” Brendan Rodgers told Jonjo Shelvey, then of Liverpool, in 2012.

In the end, the Ulsterman's prediction was way out and the Romford native was sold to Swansea City 12 months later after making 32 appearances during the 2012/13 campaign.

What Rodgers wasn't wrong about was the midfielder's ability. Shelvey went on to star for the Swans and earned a £12million switch to Newcastle United in January 2016 as they battled, unsuccessfully, to avoid the drop.

Shelvey's time on Tyneside has been blighted by fitness and disciplinary problems. Rafa Benítez, a strict disciplinarian, was reluctant to lean too heavily on the former Charlton Athletic youngster and favoured less gifted but more reliable alternatives.

Inevitably, this led to talk of a falling out between the two. But, speaking to the Evening Chronicle in April, Shelvey put those rumours to bed.

“People can talk all they want. I am not one to listen to what people say,” he said. “People say I have had rows with Rafa and things like that. It couldn't be further from the truth.”

An ongoing thigh problem which required treatment in Barcelona hampered him throughout Benítez's final season at St. James' Park and he went six months without a Premier League start before April.

Fitness issues have again stopped the former England international putting together a run of matches. But Shelvey returned to the starting line-up and returned to form for Saturday's 3-2 win at West Ham United. 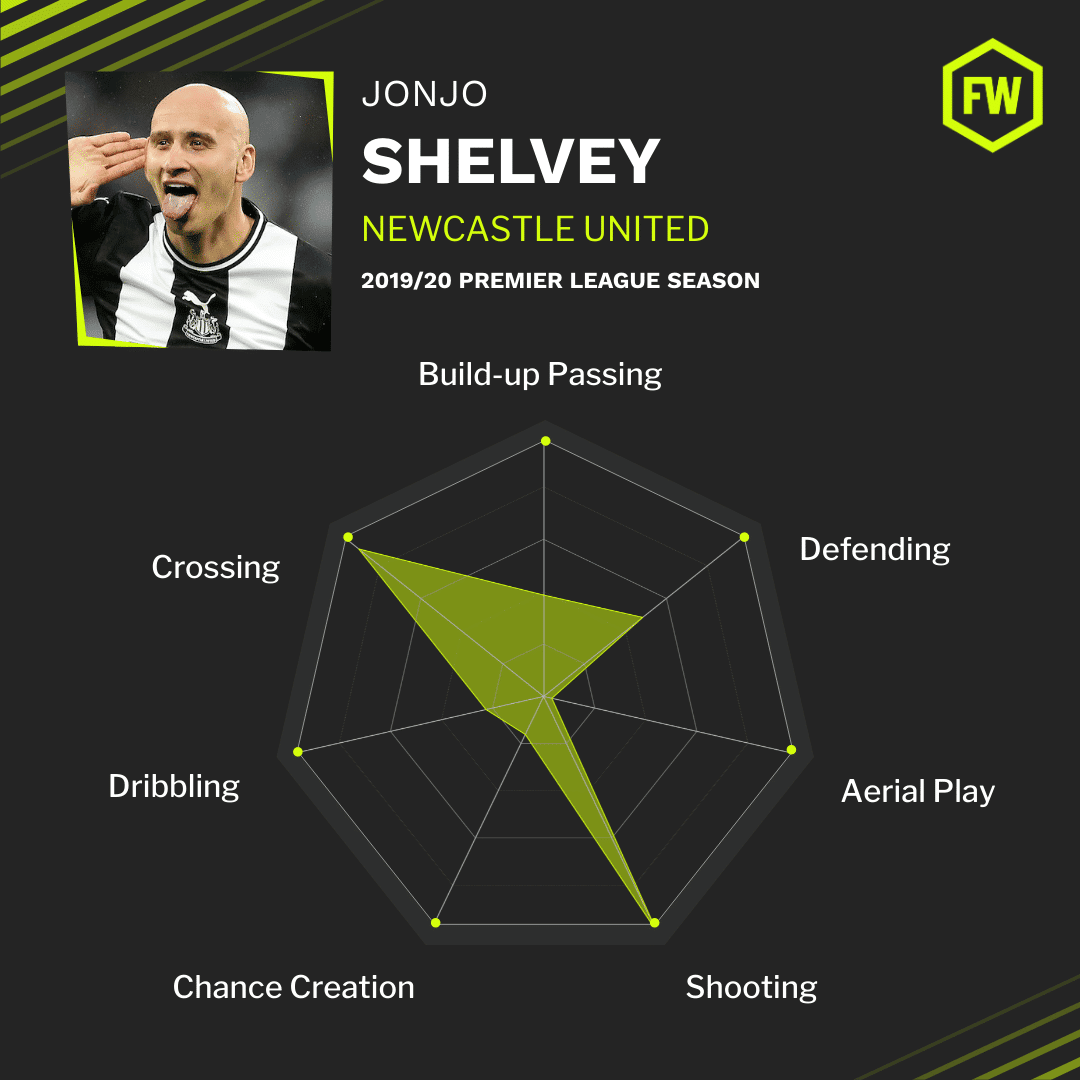 It might have been something to do with the identity of Newcastle's hosts. Shelvey has been persistently linked with a move to East London in the last year. Regardless of his motive, the 27-year-old was at his imperious best, scoring what proved to be the winner at the London Stadium to give a timely reminder of his qualities.

BBC Sport pundit Garth Crooks was impressed and, while the former Tottenham Hotspur striker is prone to hyperbole, lavished praise on Shelvey after including him in his Team of the Week selection.

“This player will look back on his career and genuinely wonder why he never won more caps for England,” he wrote on BBC Sport.

“On his day he can be as good as any midfield player in the country, but his fitness levels have always been a cause for concern along with the potential to cause mischief. Against West Ham, Shelvey demonstrated just how effective he can be on the ball.”

Shelvey was at the centre of everything good about the Magpies as they put in arguably their most complete performance under Steve Bruce.

Wins over Tottenham and Manchester United were smash-and-grab efforts. But this triumph in the capital was the result of a relentless attacking display which saw the Magpies score more than once for the first time this season. 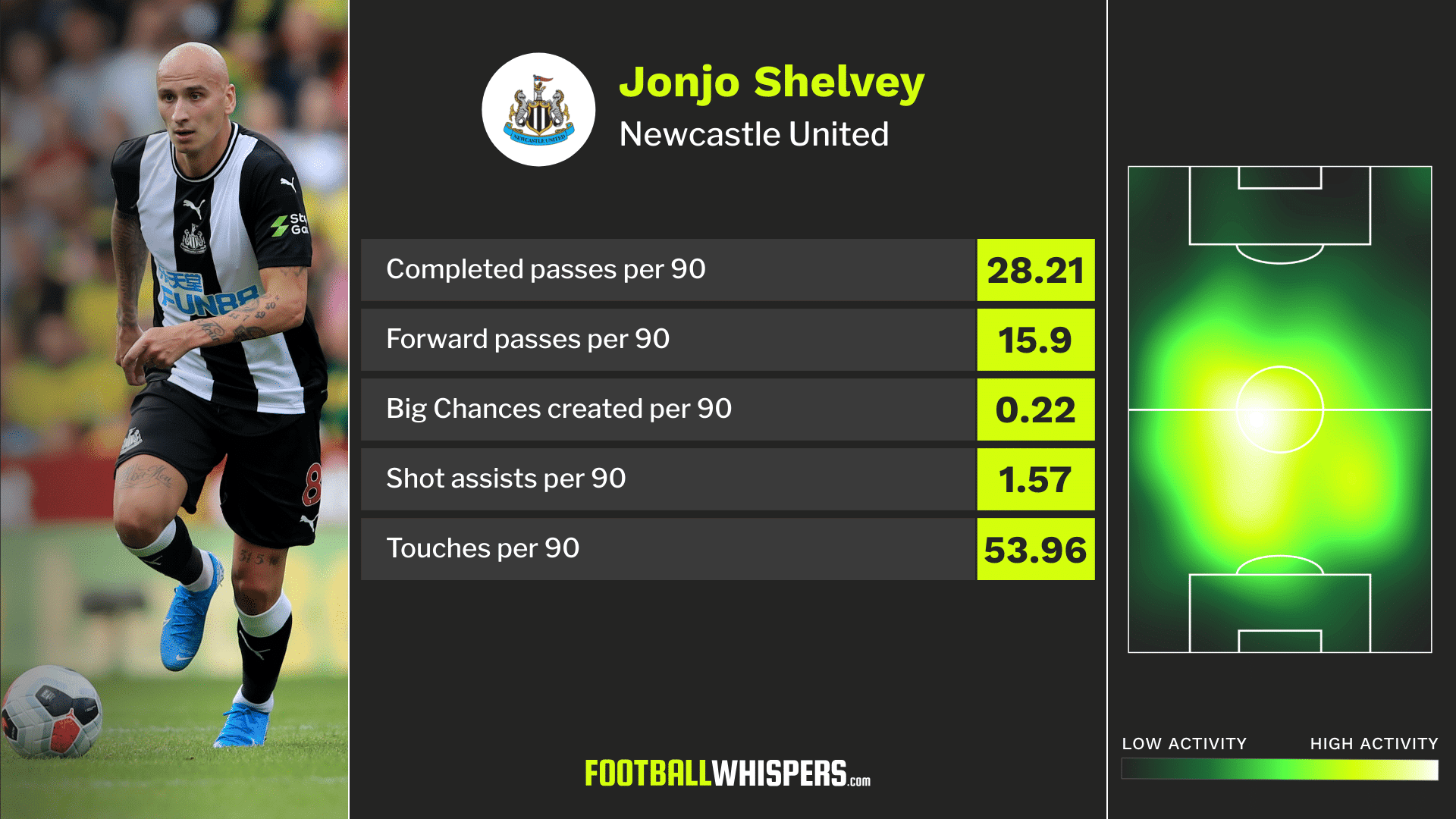 Central to that was Shelvey. No United player completed more passes in the attacking third (8/14) or attempted (4) more crosses. Shelvey had a hand in both of the first two goals as well as cracking the crossbar and finding the bottom corner from range to put Newcastle 3-0 up.

And his importance hasn't gone unnoticed by the higher-ups at St. James' Park. According to the Northern Echo, Newcastle are preparing to offer Shelvey a new deal to keep him at the club beyond 2021.

“I just thought Jonjo, if we needed a pass, could give a pass,” Bruce said after the midfielder's masterclass against the Hammers. “With set-pieces, he’s made one and scored one.

“Always, in the back of my mind, I knew he was a West Ham fan, so this is a stage he wants to play on. He was very good, he’s got to maintain it. I got the decision right.”

Bruce will pat himself on the back but the evidence is hard to ignore.

In short, Shelvey is Newcastle's creative hub. He isn't without his issues – he's also managed two red cards in that period – but the Magpies are a better team with the six-time England international pulling the strings.

Without him, it's hard to see where the creativity is coming from. Allan Saint-Maximin is a bundle of fun and no-one in the Premier League attempts (9.44) or completes (5.75) more dribbles per 90 than the Frenchman, who was successful with five of seven in East London on Saturday. But Christian Atsu has registered just four Premier League assists since promotion in 2017.

Shelvey has the vision to see things others don't and marries it up with the technical ability to execute what he sees. With Joelinton, Saint-Maximin and Miguel Almiron making runs ahead of him, he has the ideal targets to supply.

In a Newcastle side struggling to create goals, he has the skill-set required to change that.