One of the more interesting matches in this round of Championship is the Sheffield United vs Preston duel. With that in mind, we have prepared a detailed preview of the match just for you:

Our free betting tips and predictions for Sheffield United vs Preston

If you are looking for some help with Championship betting tips, check our top predictions for the Sheffield United vs Preston game:

Although Preston is currently ahead of Sheffield Utd by two points in the Championship standings, our prediction is for Sheffield United to win this game. The team seems to be falling in place after an abysmal start since they've won two of their last three matches in all competitions, including a convincing 6-2 over Peterborough in the last round. That being said, Preston won three of their last four games, but we still expect the home team to win this game.

Both teams have scored in two of the last five h2h meetings between these two teams, but we expect both teams to score in this one. This is mostly based on our gut feeling, so feel free to take this prediction with a grain of salt. After all, both teams have scored in 33% of Sheffield United matches in Championship so far, while the same thing happened in 50% of Preston games.

The best odds and stats for Sheffield United vs Preston

If you want to bet on the top Sheffield United vs Preston odds, check our list of odds taken from some of the best betting websites:

After getting demoted from the Premier League, Sheffield United made a managerial change and brought Slavisa Jokanovic, the man who promoted Watford and Fulham to the Premier League before. However, the team had a poor start to the season and only in the last two games they've shown some signs of progress – especially in their 6-2 win over Peterborough this weekend. Overall, Sheffield Utd has one win, two draws, and three losses after six games. Mousset and Stevens are currently injured and they won't play in the next game.

Starting the new season with three straight losses certainly scared Preston fans, but the team then won two of the next three games to improve their record and climb to the middle of the standings. In fact, Preston is currently on a four-game unbeaten run in all competitions, so the team is in good mood at the moment. However, Brown and Olosunde are injured and out of contention. 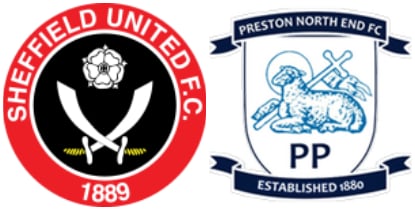