Sheffield United wouldn't have expected to be winless from five games but here we are. Can they get up and running against Peterborough?

Find out with our Sheffield United vs Peterborough match preview with free tips, predictions and odds mentioned along the way.

Peterborough might be sitting ahead of Sheffield United in the standings right now but only just; the Posh have only taken four points from a possible 15. Sheffield United are still winless in the Championship but did register a win against Championship side Derby in the cup before taking a point from Luton after that. With two respectable results and an international break to work out on the grass we've got a sneaky suspicion that Sheffield United will sneak their first win of the campaign here.

It won't be a classic but the Blades won't care

Next up in our list of three tips is that this game will come up short of 2.5 total goals. Peterborough have seen a total of 12 goals in their league games this season giving them a game average of 2.4. When you compare that to how Sheffield United's stats look it's pretty high. The Blades have only seen eight goals since the season get go; that's a paltry 1.6 goals per game. On top of that, the last two meetings between the sides ended with just one goal per game.

A one nil win coming up

The final prediction we make is that Sheffield United will beat Peterborough 1-0. We've already touched on the fact that the goals are unlikely to flow but on top of that a look over the last couple of Peterborough fixtures tells you what can be expected; they've lost their last two games 1-0. Coincidentally, that's the same score line that Sheffield United have beaten the Posh by in the last two meetings.

Odds and more for Sheffield United vs Peterborough

Sheffield United to have lift off for the season

Sheffield United were fancied to be amongst the more fancied sides back in August. Here we are one week into September though and Slavisa Jokanovic's men are still looking for their first win. Scoring goals remains the big problem; the addition of Wolves man Morgan Gibbs-White might help on the creativity front and he'll probably make his bow on Saturday. Wins haven't exactly been flowing for The Blades' visitors, Peterborough, either. The big difference there is that Peterborough were expected to struggle. They're yet to keep a clean sheet this season though and that needs to change. Can Christy Pym keep Sheffield United's lacklustre forwards out? 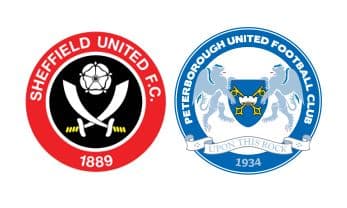