There will be no prizes for guessing what the pre-match talk will be about with Derby now formally in administration. A win here would put the Rams back into a positive points position but can they achieve that? Find out with our Sheffield United vs Derby match preview with free tips, predictions and odds mentioned along the way.

We'll be honest, if we were basing this game purely on stats we'd probably lean towards a Sheffield United win. Football isn't all about stats though; there is a huge element of emotion to be considered too and those waves don't get much bigger than what Derby are going through. Besides, this match was never a home banker anyway. Sheffield United have drawn three of their last five games (at the 90 minute mark) with one loss in the five game run. Derby have lost two of five with two draws and a win, which came last time out. They pulled together fantastically last week and a point here would be a solid result. Sheffield United would see it as a further building block too.

Derby and Sheffield United to net

Okay, we might have factored in emotions in our first prediction but that's not needed here. Neither of these sides have been particularly solid of late and therefore the prospect of both getting on the scoresheet shouldn't be too much of a bold claim. Both have just one clean sheet in their last five games and, although Derby are the more toothless of the two sides, it is Sheffield United that are considerably more leaky of late with seven goals conceded in their last four.

An odd goal for the Rams

The prospect of backing Derby to score an odd number of goals is a bit bonkers, isn't it? Well, the reason we're including it in our tips is because we think they'll bag just the solitary goal. We've already predicted they'll score at some point and they won't score two. They've only hit the two goal in two of their past 10 fixtures; one was a cup game against League Two opposition and the other was last weekend when the Stoke keeper, Josef Bursik, had a mad few seconds. Sure, you could go for a Derby under 1.5 bet if you wanted but the odds aren't nearly as attractive.

The best odds for Sheffield United vs Derby

Wayne Rooney was much maligned last season but he's earned plaudits early on this campaign after helping Derby start the season in good shape despite their off field issues. If he can master an escape from relegation from their current position though he'll be lauded forever. That fight starts now and Rooney will need the experienced heads of Curtis Davies at the back and Sam Baldock up top to help the younger players of his squad out.

Sheffield United have had their own tough start to the campaign but for different reasons. Goals and wins were few and far between but a couple of good results and goals starting to go in and the mood has changed. Veteran forward Billy Sharp has been an important cog in the recent upturn and he'll be in the thick of it come Saturday afternoon. 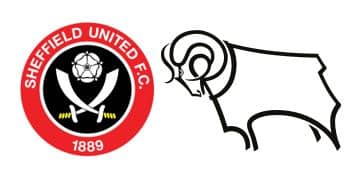