The season has not been going to plan for Sheffield United to date and they entered the international break in pretty ropey form. Can they get back on track here as Coventry visit? Find out with our Sheffield United vs Coventry match preview with free tips, predictions and odds mentioned along the way.

Sheffield United vs Coventry: A trio of free tips

Blades to show post international break sharpness with a win

We kick off our tips by backing Sheffield United to win; it's sticking our necks out somewhat too given the Blades have won just one of their last five games. Things have been slightly brighter for them at home though with the fact they've won two of their last four at Bramall Lane. The other big consideration in our thinking is the form Coventry have shown; their season as a whole has been very strong but it's all driven by their home form. On the road they've lost half of their eight games winning just two. Sheffield United have won three of the last four head to heads too.

Goals will be scored

An over 2.5 goals prediction looks like good value with Sheffield United and Coventry locking horns. Sheffield United have gone over that cut off in three of their last five games including their most recent game before the international break; their game average in that period was 3.0 goals. Coventry have also seen three of their most recent five game surpass the 2.5 cut off with both their last two going over. Their game average in those five games was 2.8.

Expect goals at both ends

Our final tip of both teams to score is based on the fact that both teams have been reliably finding the net without looking secure defensively in recent weeks. Sheffield United have seen goals for both teams in six of their last seven games with Coventry's record the same in their past seven. The only difference between the two seven game runs is that Coventry's game with a ‘nil' in the score line saw them keep a clean sheet – meaning they've scored in seven games on the spin – whilst Sheffield United blanked in their one game that didn't see both teams score; they've therefore scored in six of seven.

Find the best odds for Sheffield United vs Coventry

Sheffield United really need to find some consistency because they're not too far away from being sucked into a battle at the wrong end of the table; they'll look to Morgan Gibbs-White and Billy Sharp to fire them to some results. For Coventry, they have their sights set on the top of the league and why not. Their home form is the best in the league and if they can find some away rhythm they'll be right in the mix with Viktor Gyokeres and Matthew Godden already having hit a combined 15 goals this season.

FAQ on Sheffield United vs Coventry 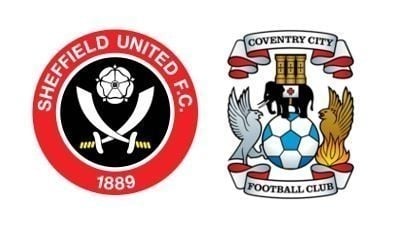