Of the three promoted clubs, Sheffield United were the side that largely went under the radar during the summer.

Despite Chris Wilder’s men claiming automatic promotion to the top flight, the focus appeared to be on Aston Villa, the play-off winners, and Norwich City.

The Canaries were the surprise package in the Championship and made only a handful of additions this summer. That was a talking point. As was Villa’s decision to sign 12 players ahead of their return to the Premier League.

Sheffield United quietly went about their business initially before adding a total of ten players before the window came to a close. Wilder bulked up his attack: Callum Robinson, Ollie McBurnie, Lys Mousset, Ravel Morrison and Luke Freeman all made moves to Bramall Lane.

The combination of so many new faces and the lack of Premier League experience meant many tipped the Blades to head straight back down. But four games into the 2019/20 campaign it’s Sheffield United who sit in the top ten with Aston Villa and Norwich in the bottom three.

Wilder’s men have lost just once, a 2-1 defeat to Leicester City, and they came from 2-0 down last time out to claim a point against Chelsea. They’re also one of only two teams to have scored against Crystal Palace – a 1-0 win – and managed to claim a well-deserved draw against Bournemouth on the opening weekend of the season.

The Blades didn’t have an easy start to life in the English top-flight but five points from a possible 12 on offer from matches against that quartet shows they aren’t out of place in the table.

Their run of fixtures doesn’t get any easier with Everton, Liverpool and Arsenal to come in their next five matches. But Wilder and his team will no doubt fancy their chances of a scalp or two. Especially after their showing in the second half of the match against Chelsea.

In that situation, 2-0 down away from home against a top-six side, many managers would shut up shop so their goal difference doesn't take a battering. But Wilder isn’t like most managers. He has a system and he trusts his players to execute it. 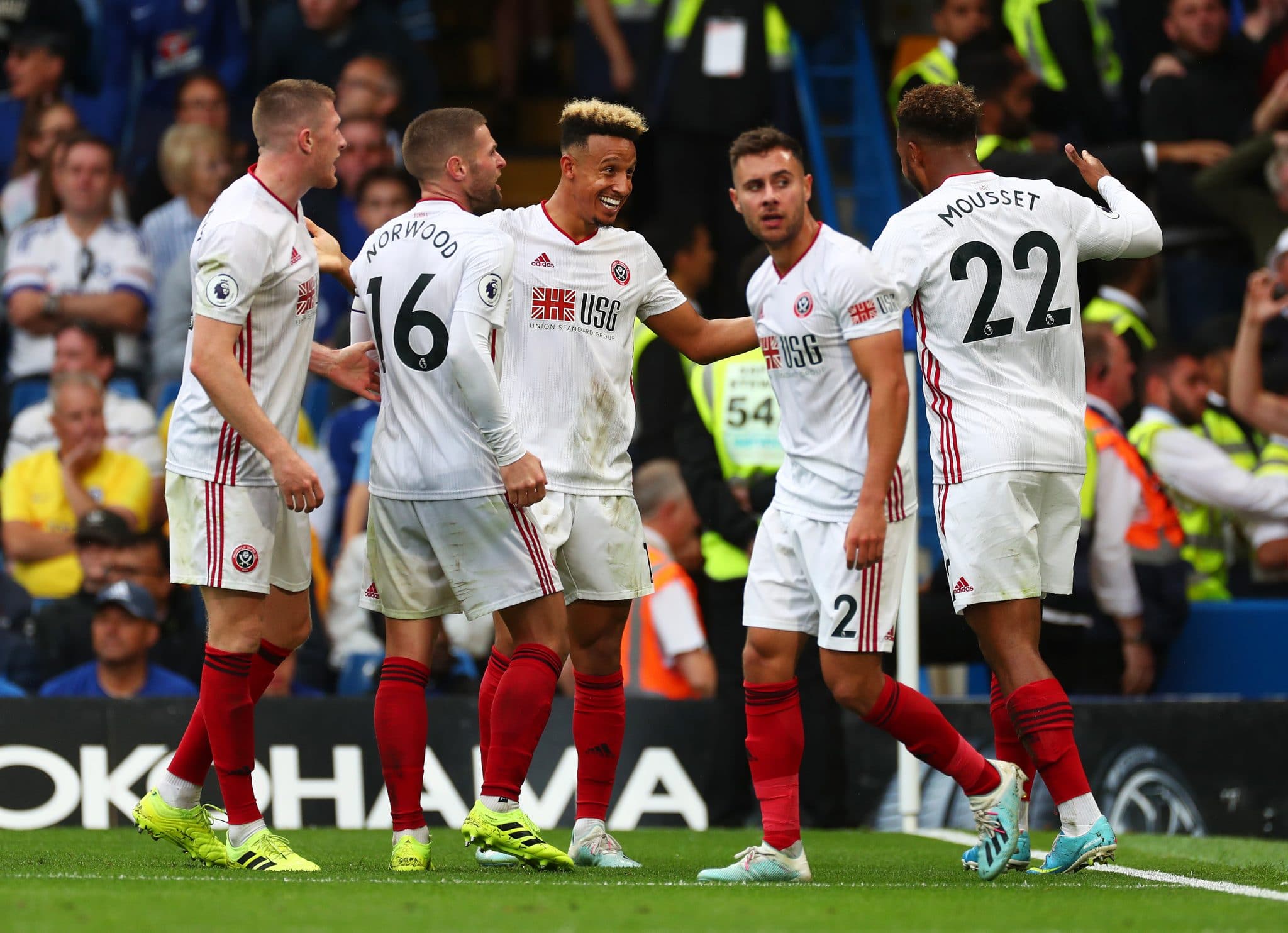 Sheffield United didn’t go into safe mode. Instead, they went on the attack.

Inside of a minute after half time, the deficit was halved. Enda Stevens danced his way past Chelsea defenders and into the area. His pull-back found Robinson and the former Preston North End forward sidefooted past Kepa.

It’s the second time this season that Wilder's side have scored inside of three minutes after the restart. The winner against Crystal Palace arrived in the 47th minute. It’s a good trait to have.

So many teams in the top flight take time to get up to speed after the half-time interval. There’s a chance to catch them cold and that is what Sheffield United have done in half of their games.

The Blades also have a never-say-die mentality. Against Bournemouth, they snatched an 88th-minute equaliser. Their second goal against Chelsea, a rather fortunate one it must be said, arrived in the 89th-minute.

Both Norwich and Villa have been praised for the style they’re looking to implement. Granted, it is positive to see teams looking to attack. But both sides haven’t got the balance right and it’s why they have a combined six points to their names.

Sheffield United, on the other hand, are just as expressive as they were in the Championship. Wilder has his overlapping centre-backs and he’s playing with inverted wing-backs on occasions.

The difference is, the Blades know how to defend. They’ve conceded just five goals in their four Premier League matches. Norwich, for example, conceded four in 45 minutes against Liverpool.

The sample size isn’t the largest but if Wilder and his team carry on as is then they’re on target to get 50 points – the same number Watford amassed last season for an 11th placed finish.

This isn’t to say their early form will continue throughout the season, but Sheffield United are proving themselves to be real dark horses in the Premier League this season.

The manager and the team deserve more credit than they’re currently getting.