If Liverpool manage to complete the signing of Xherdan Shaqiri there's a chance it's a move that goes under the radar for two reasons.

Firstly, the Reds aren't having to break the bank to land him. The Stoke City attacker reportedly has a £12million clause in his deal. It's a nothing fee in the modern day; not for an experienced international footballer, especially when the fact Championship stars are being touted around for £40million is taken into account.

And, secondly, his name isn't Nabil Fekir. Fans of the Merseyside club had been clamouring for the best part of five weeks to see the Lyon star in red but events on Saturday postponed that particular transfer, at least for the time being.

The anticipation had been building and there was no release. No matter who Liverpool signed next, it was always going to be underwhelming in comparison.

To an extent, the reaction to the Shaqiri links are understandable. Once one of the hottest properties in Europe, his stock has fallen and he hasn't even been able to perform consistently for Stoke. He's not Ousmane Dembélé, Malcom, Leon Bailey or Gonçalo Guedes – all named as Liverpool transfer targets in recent weeks.

He's Shaqiri, the consistently inconsistent attacker. Capable of the sublime on his day but viewed by many as a luxury player. An individual whose talents are so natural and outstanding, yet his work rate and desire simply doesn't match up.

It's the media narrative and preconceptions are hard to shake.

If he were to arrive at Anfield he would do so with no pressure – he's underrated and overlooked. It's easy to forget he's still only 26. It's even easier to forget that Liverpool manager Jürgen Klopp transformed Adam Lallana as a player.

The former Southampton man used to last 60 minutes before being replaced. He was wasteful in front of goal and, truth be told, didn't appear to fit in. But Klopp improved the midfielder's stamina, tweaked his role and he became a key cog in the pressing traps while having an impact in the final third.

His first full season with Klopp resulted in his most prolific Premier League return to date – eight goals and seven assists. 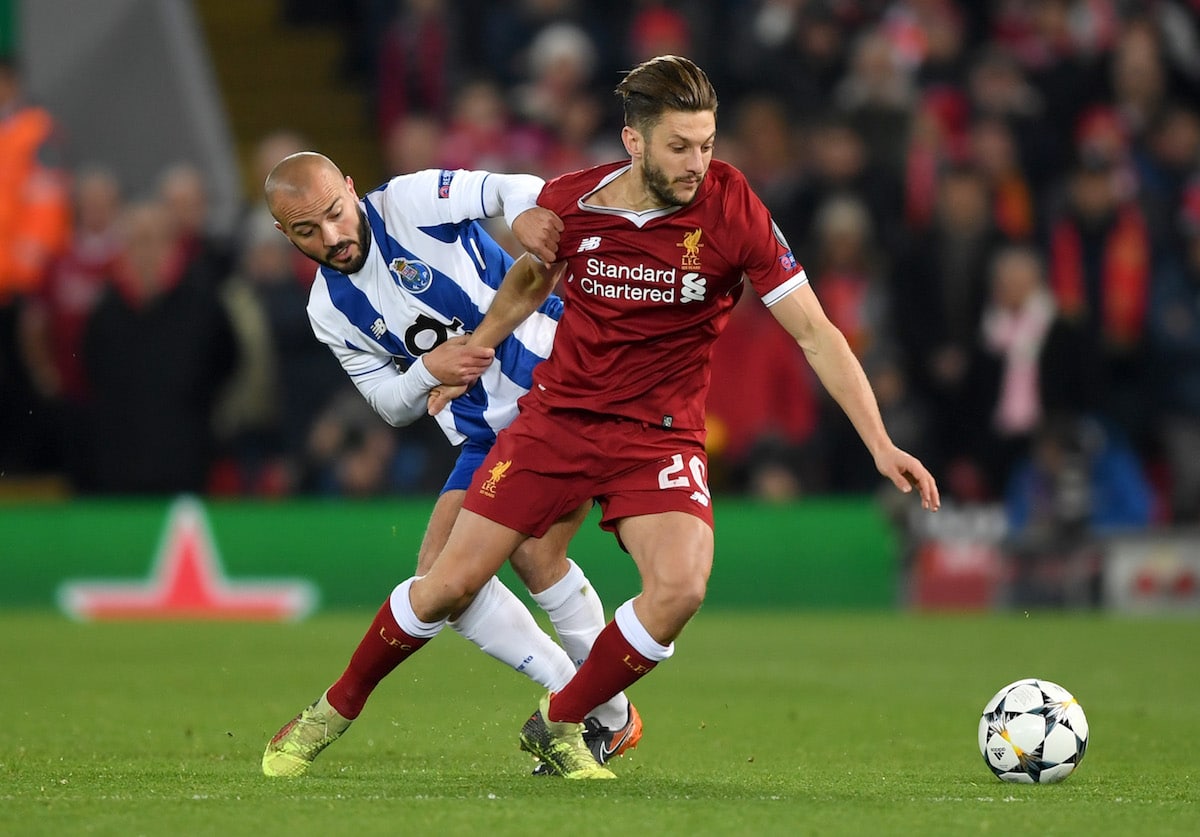 The German tactician was able to do that with Lallana, why wouldn't he be able to do similar with Shaqiri? The Switerzland international was involved in 15 goals last season – the same amount as the Liverpool No.20 was during 2016/17 – while playing for a struggling Stoke side.

Not only that, he was also playing in different systems and operating in various roles. He showed his versatility and it's perhaps why Liverpool are showing an interest.

The former Bayern Munich man is known as a winger or a wide forward but at times last season, when Stoke used a 3-4-3, he dropped deeper into central midfield to dictate proceedings with the wing-back occupying the space out wide.

That allowed him to join the play late and he had more room in and around the penalty area. It benefitted him because he's one of the best strikers of the ball from distance in the Premier League.

While he might not be a natural fit in Liverpool's midfield three, and he wouldn't be a starter there, using him in a box-to-box role would see the left-footer doing similar things. 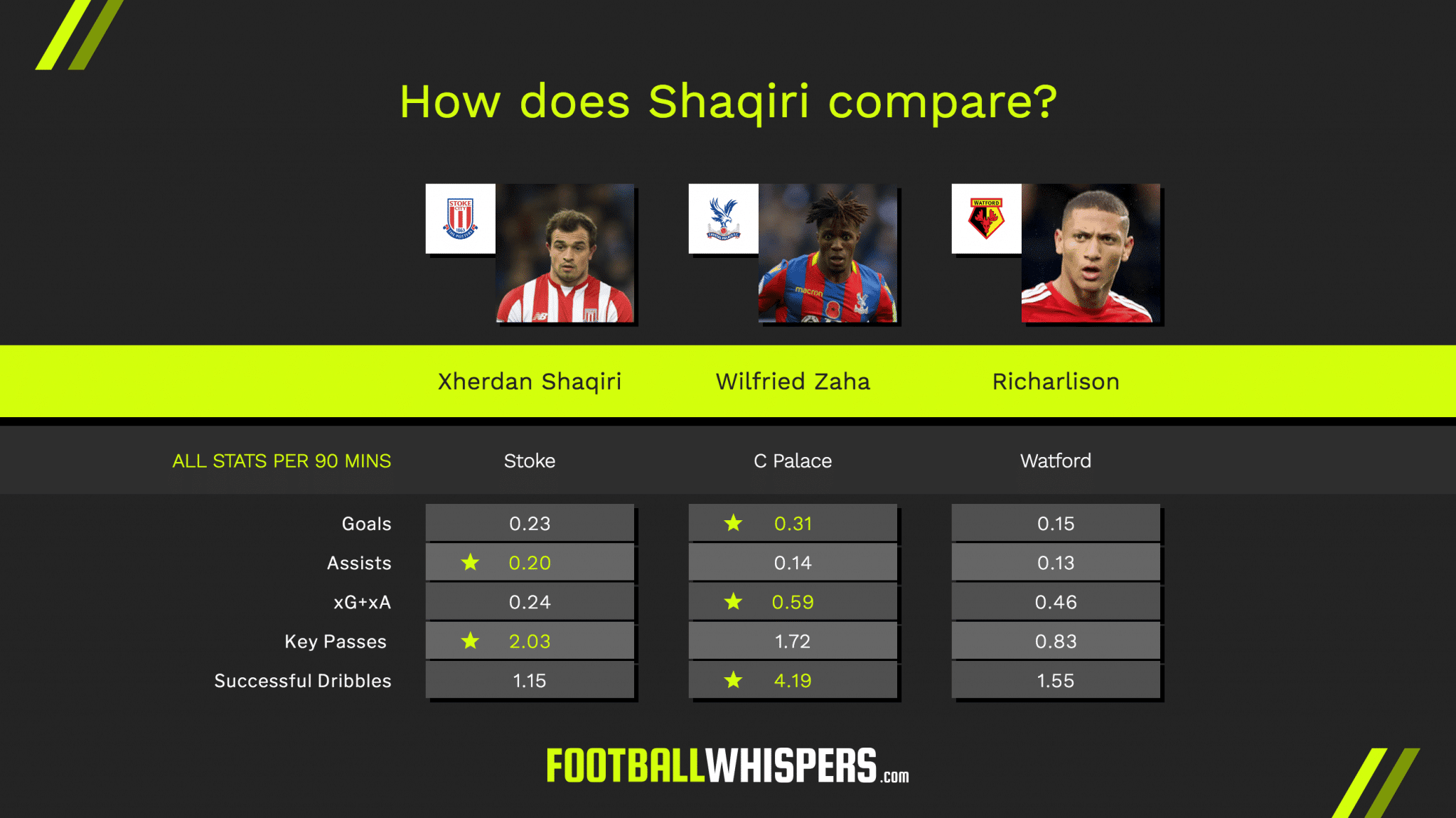 That's just one possibility. He would likely arrive to act as a back-up to the forward three. He's not the most prolific or the most creative but for £12million he doesn't have to be.

Wilfried Zaha and Richarlison were both tentatively linked with Liverpool throughout the season. Crystal Palace reportedly wanted £60million for Zaha while Watford wanted in the region of £50million for their Brazilian – also subject of Tottenham transfer rumours.

The graphic above compares the duo to Shaqiri looking at wide forward stats. His expected stats (xG+xA) don't make for pretty reading but he was playing in a Stoke side that struggled to piece together attacks last season.

At Inter Milan his expected goals + expected goals assisted per 90 was 0.47 and it was 0.84 at Bayern Munich. When he's surrounded by quality he steps it up.

One thing that remains the same, however, is his number of key passes per 90. It's always about two and at Inter Milan he was averaging 3.53.

He doesn't embarrass himself in any category and he'd cost a fraction of the two he's being compared with.

If it's to purely supplement Sadio Mané, Mohamed Salah and Roberto Firmino then spending £12million on Shaqiri is an absolute no-brainer. He's versatile, experienced and he has a point to prove with many already writing him off.