Xherdan Shaqiri had a strange debut season with Liverpool.

In December, he was the king of the Kop after coming off the bench to net a double in the 3-1 win over Manchester United. However, in the space of a month, he went from the talk of the town to something of an afterthought.

His last start in the Premier League was against Leicester City in January. From February onwards he appeared in just 81 minutes of top-flight action.

Despite seemingly falling out of favour, the Switzerland international still played a part in keeping the title race alive and was part of one of the most historic Anfield nights ever.

He came off the bench against Newcastle United to assist Divock Origi‘s late winner. Then, with Roberto Firmino and Mohamed Salah ruled out, Jürgen Klopp gave him a start in the second leg against Barcelona. The Reds were 3-0 down heading into the match and had a slim chance of progressing. But they needed something special.

With 56 minutes on the clock, Shaqiri’s perfectly weighted cross was expertly nodded home by Gini Wijnaldum to level the scores.

The now-famous Trent Alexander-Arnold corner only came about because Shaqiri was heading over to take it. While he wasn’t directly involved, he still had a hand in what turned out to be a winner.

Regardless of what happens moving forward, he'll always be a cult hero on Merseyside. And rightly so. A winner against United and a big part played in Liverpool winning their sixth European Cup.

But there's uncertainty over whether he's trusted by Klopp. Should the Reds cash in on him this summer – while his stock is high – or keep him as a squad player? 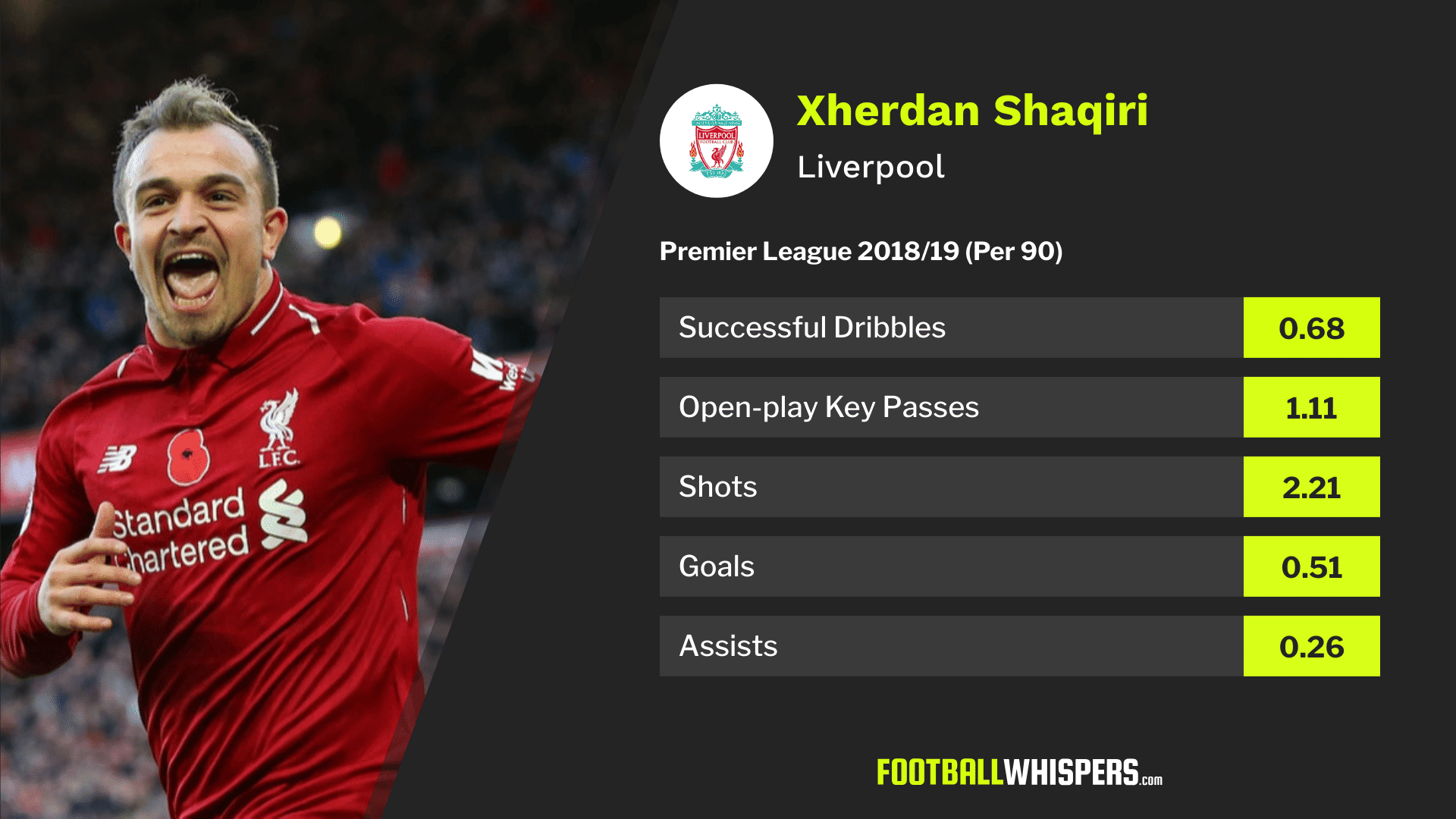 In May, reports surfaced claiming Liverpool weren't against selling him for around £25million, double what they paid 12 months prior. Yet there have been no bids made and interest in the former Internazionale man has seemingly died down.

With the Reds reportedly not going big on forwards this summer, Shaqiri's place looks safe. But should it be?

For example, Dave Maddock of the Daily Mirror claims Liverpool are in the market for a versatile forward for around the £20million mark. It's not impossible to find a player who ticks all of the boxes for that amount of money, but it does limit them.

You could feasibly sell Shaqiri for £25million and see the budget for a wide forward swell to £45million.  Selling him for the sake of selling him is bad business. But, unless Klopp has plans for Shaqiri, it's hard to make an argument to keep the 27-year-old around.

Not because he should be starting. Rather, as a bit-part player he's not as effective. Liverpool need depth. They need quality waiting in the wings. But what use is Shaqiri if he's a blunted version of himself? 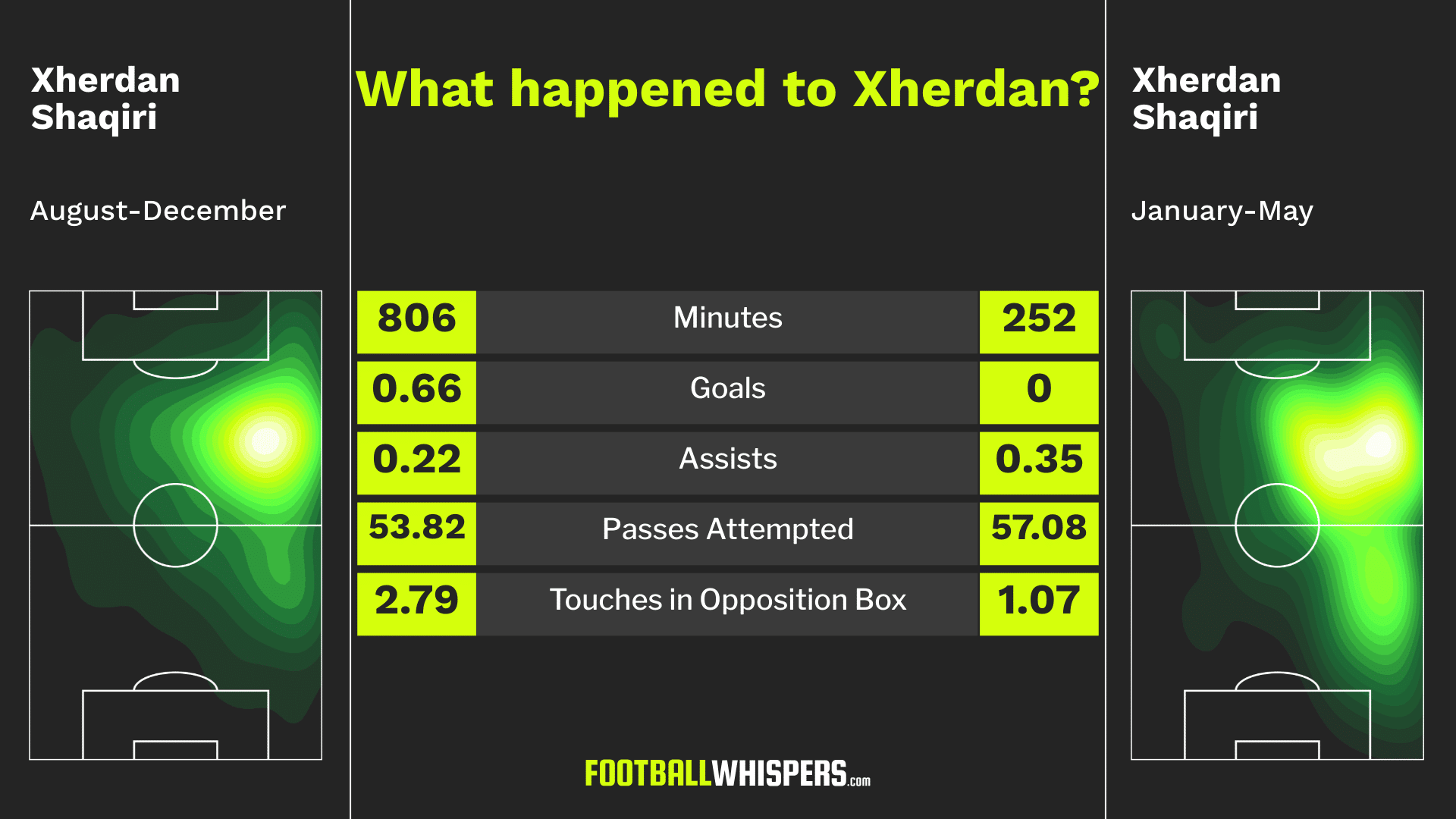 Yes, he had an impact off the bench against Newcastle but that was from a set piece. He delivered against Barcelona but if you remove the goal involvement, his performance was that of a player lacking match fitness.

As shown in the graphic above, in the first half of the campaign he appeared in 806 minutes. He averaged 0.66 goals per 90 and chipped in with 0.22 assists. He was getting into the area, too, averaging 2.79 touches in the box.

In the second half of the season, he played just 252 minutes in the league and failed to score. However, he did average 0.35 assists and he was playing more passes. Perhaps signs he was adapting to more of a creative role.

But in terms of being a goal threat, he wasn't. His expected goals average dropped from 0.38 to 0.06, he averaged 1.72 fewer touches in the penalty area and the former Stoke City attacker went from having 1.47 shots to 0.71.

The difference between the first part of the season and the latter is drastic. It shows, if given minutes, Shaqiri can be a valuable squad player who chips in. If his playing time is limited he's of little use.

Klopp has a big decision to make. Perhaps the biggest of the summer for the German tactician.

If he keeps him around but decides not to play him then the Reds have wasted a valuable attacking space within the squad. With Salah, Firmino and Sadio Mané all playing a high number of games over recent seasons, their minutes may have to be managed a lot more carefully next term.