Shanghai Shenhua and Wuhan Three Towns meet in the Chinese Super League on Sunday, June 12th. Both clubs put perfect starts on the line at the Hongkou Stadium this weekend. Read our free predictions and find the latest odds for the fixture below in our detailed match preview.

Early pace-setters Wuhan Three Towns go in search of more points when they take on Shanghai Shenhua on Sunday. Read our top three predictions for this week’s fixture below.

Wuhan Three Towns are competing in the Super League for the first time in their history this season, though an aggressive recruitment drive followed by convincing wins in their opening two fixtures has already made them a feared force. Three Towns rattled nine goals past Hebei and Guangzhou FC in their first two assignments and their team – that’s littered with Brazilians – is worth backing to make it three wins from three at Shanghai Shenhua’s expense.

Like their opponents on Sunday, Shanghai Shenhua managed to win their first two matches of the new campaign and as such, they should have enough confidence to give Wuhan Three Towns their biggest test of the season so far. Both teams have 100% strike rates in the Super League fixtures they’ve contested to date and with plenty of attacking talent on show, were tipping the net to ripple at both ends on Sunday.

View our rundown of the best stats for Sunday’s match below alongside a tool to help you choose the best odds.

You can find all of the most up to date team news and injury updates for Sunday’s Chinese Super League tussle between Shanghai Shenhua and Wuhan Three Towns below.

Shanghai Shenhua enjoyed a confidence-building 2-0 derby day win over city rivals Port on Wednesday thanks to a brace of second half goals. Manager Wu Jingui would have been thrilled as his team's display and he is unlikely to make changes to a purring XI on Sunday.

Wuhan Three Towns sent shockwaves across the Super League with their 6-0 annihilation of Guangzhou FC in midweek. New signings Davidson and Nicolae Stanciu played integral parts in their big win, while Brazilian Marcao netted off the bench and could start ahead of his compatriot Ademilson on Sunday. 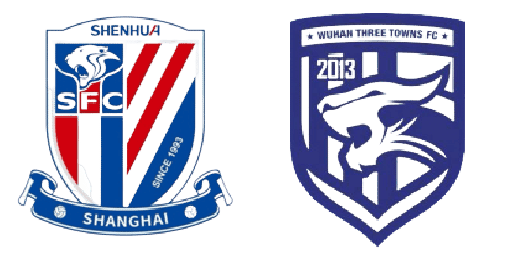 Who is Wuhan Three Towns’ manager?