The midweek Chinese Super League action sees a game between the top and bottom club, as Shanghai Shenhua take on Wuhan at the Kunshan Sports Center Stadium.

Shanghai Shenhua step into the game following a 3-1 success over Tianjin Tigers. This makes it two wins out of two since the break for Shanghai Shenhua. Meanwhile, Wuhan avoided defeat for the second consecutive game after grabbing a 1-1 draw with Dalian Pro.

Shanghai Shenhua have been in good form since the restart and they have confirmed that the same by picking up back-to-back league wins – albeit against teams in the lower half. A game against Wuhan will offer more opportunities to get this form to greater heights. Shanghai Shenhua trail leaders Shanghai Port by just a point and this happens to be a must-win game for the club. Despite some recent improvements, Wuhan are not in a great position for beating one of the top teams.

Wuhan to score less than 0.5 goals

The last time Wuhan were able to get over 1.5 goals was in the FA Cup match against Beijing Guoan last season. In this campaign, the team has truly struggled for goals and they have only managed four in the opening seven matches. Shanghai Shenhua might not have the greatest defence, but they might enjoy an easy day out.

Shanghai Shenhua are just a point behind the Shanghai Port and the back-to-back wins – over Dalian Pro and Tianjin Tigers – have given momentum to the team. The match against Wuhan will complete this list of games against the bottom half teams. Wen Jiabao will be the player unavailable for the game following his second yellow card against Tianjin Tigers.

The back-to-back draws have helped to Wuhan get some kind of consistency in their game. The recent match against Dalian Pro witnessed the team provide a good account of themselves. Now, Wuhan how to prepare for a sequence of difficult matches with the likes of Shanghai Shenhua and Changchun Yatai being the opponents.

Questions about Shanghai Shenhua vs Wuhan 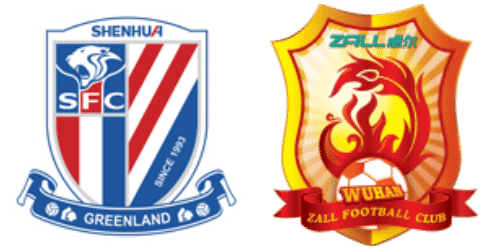 Where is the match going to take place? Kunshan Sports Center Stadium